Home CAT OWNERSHIP Why cats sleep so much; do our cats rely on us for...
Print
Email
Facebook
Twitter 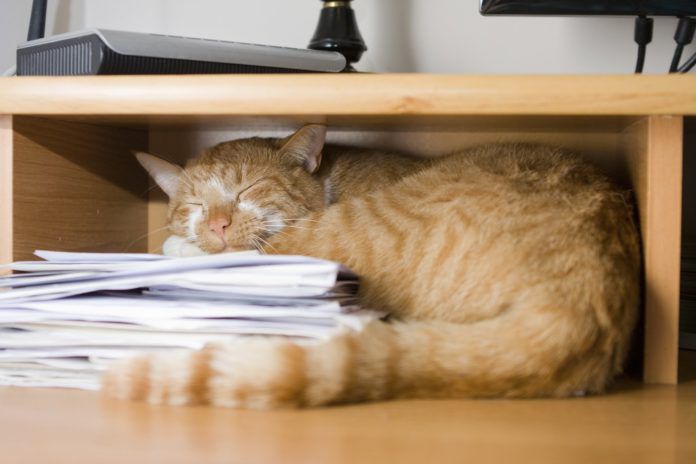 The French proverb, “Let sleeping cats lie,” is advice that cats have taken to heart. As a cat owner, you’ve probably watched your pet sleep the day away — with plenty of need for rest come nighttime, too. Is there something wrong with your cat?

According to Bonnie Beaver, DVM, a veterinarian at Texas A&M’s College of Veterinary Medicine and Biomedical Sciences, simply put: It’s in their DNA. When it comes to sleep, many cats sleep 16 to 20 hours a day, more than any other animal. They’re also not particularly choosy when it comes to where they take a catnap.

“Over the thousands of years that cats have evolved, so have their sleeping habits,” explains Dr. Beaver, former president of the American Veterinarian Medical Association. “Early on, they had to hunt for food to stay alive, and that desire for food can require a lot of energy. So sleeping helped cats conserve their energy. Even though the common housecat does not have to hunt for its next meal, a cat is still conditioned for sleep. House cats sleep a lot more than feral cats do because they don’t have to spend a lot of time searching for food.”

However, a portion of this sleeping time — perhaps as much as forty percent — is spent resting and not in deep sleep, according to Dr. Beaver. And as far as dreaming is concerned, “We know that dreaming occurs in REM (rapid eye movement) sleep, and cats very much have an REM phase of sleep,” notes Dr. Beaver.

“They also exhibit movements during REM sleep, so it is possible they can dream. What are they dreaming about? Since we can’t ask them, we really don’t know,” says Dr. Beaver. She adds that if a cat’s whiskers or paws twitch during sleep, it’s very possible she is dreaming.

And while dogs are known to snore, cats tend to be quiet sleepers, Dr. Beaver points out. “Most cats don’t snore because they don’t have a loose, soft palate like many breeds of dogs do.”

And what if your cat seems to sleep very little? “Cats are like people: Each one is different,” explains Dr. Beaver. “Each cat is unique, so if she does not seem to sleep much, it may simply be her normal routine. It is more important to note changes in behavior. If it seems like the cat is not sleeping as much as she used to, it could mean that something is wrong. If that is the case, the cat needs to see a veterinarian.”

Do cats look to us for guidance?

Many people consider cats to be aloof and possibly indifferent even to their owners – but a recent study challenges that stereotype, and even suggests that our cats do rely on us for emotional cues.

Previous research has shown that dogs look to their owners to determine how to react to an unfamiliar object, a phenomenon known as social referencing. And human babies also do this by processing information from their parents’ facial expressions and voices.

In a study published in Animal Cognition, Isabella Merola, PhD, reports how she tested social referencing in cats — much the same as was done with dogs — by placing cats and their owners in a room with a potentially frightening object.

Twenty-four cats and their owners participated in the experiment, and were placed in either a positive group or a negative group. Individual cat-owner pairs entered a room that contained an electric fan with plastic ribbons attached. At one end of the room was a screen that acted as a barrier for the cats — marking the only way out.

“The aim was to evaluate whether cats use the emotional information provided by their owners about a novel/unfamiliar object to guide their own behavior towards it,” according to Dr. Merola from the University of Lincoln in the UK.

As the cats initially walked around the room, their owners were instructed by the researchers not to react to the fan one way or another. Then they were instructed to respond either positively or negatively. In the positive group, owners displayed happy expressions and calming voices as they approached the fan. In the negative group, they acted fearfully and stepped away from it.

Seventy nine percent of the cats looked from the fan to the owner during the neutral phase — a percentage that closely matches the results for dogs in a similar experiment. The cats also “changed their behavior in line with the emotional message given by the owner,” according to the study.