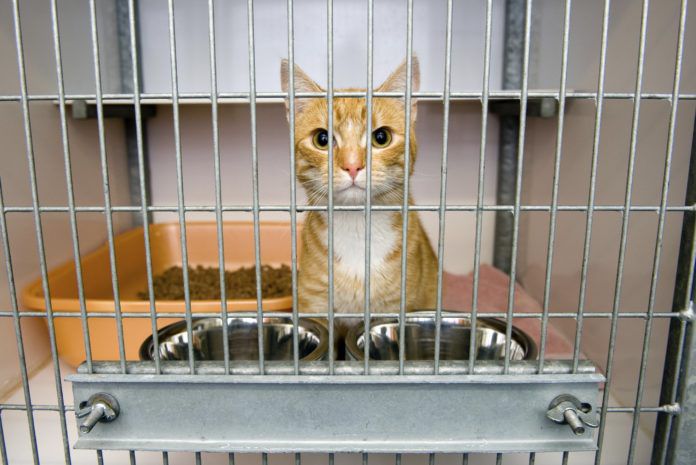 Recently, at my cats-only veterinary hospital, I examined a young female cat that had been adopted a few months before from a local rescue organization. The owner brought her in for behavioral issues. “She’s been making trilling noises, and she sticks her rear end in the air, and is rolling around on the carpet all squirmy,” explained her concerned owner. “She’s also become extremely affectionate,” she said. “But the trilling and meowing at night is driving us crazy!”

What the owner was describing is classic estrus (heat) behavior. “Actually, there’s nothing to be concerned about,” I quickly told her. “You’ve just given me a textbook description of a cat in heat. Once we spay her, this behavior will stop.”

The owner responded: “Well, that’s the problem. She was spayed five months ago.” Oh, dear.

“You’re sure she was spayed?” I asked. The owner fished the adoption papers out of her purse. On the form it said, “female spayed.” I explained to her that it’s possible that the person who relinquished the cat to the rescue group may have told them she was spayed — when in fact, she really wasn’t. These kinds of mistakes do happen.

“When I adopted her, they said that they had spayed her the week before. In fact, her belly was still shaved when we took her home,” elaborated the owner. I retrieved our clippers and shaved the hair that had grown back — and I could clearly see the scar from the spay surgery. I had no doubt now that the cat had indeed been spayed. “This looks like a case of Ovarian Remnant Syndrome,” I told her.

The benefits of spaying

Spaying (surgical removal of the ovaries and uterus) is the most commonly performed surgery in female cats. The purpose of spaying is to prevent overpopulation and to eliminate unwanted behaviors associated with estrus. Spaying can also confer other benefits, such as a reduction in the incidence of mammary tumors (if spaying is done before the cat ever comes into heat), and the prevention of conditions like pyometra, which is an infection of the uterus.

Ovarian Remnant Syndrome (ORS) is a reported complication after spaying. It occurs as a result of the presence of functional ovarian tissue in the cat’s body. The most common cause of ORS is surgical error — a piece of ovarian tissue inadvertently left behind by the surgeon during the spay surgery.

The latter three scenarios are uncommon, though. Nearly all cases of ORS are due to the surgeon accidentally leaving a piece of ovary behind at surgery.

ORS is more commonly seen in dogs compared to cats, mainly because dogs are more difficult to spay than cats. Dogs have more fat tissue surrounding their ovaries, which can make identifying the ovaries a bit challenging. In cats and dogs, the ovaries are held in place by the suspensory ligaments, which must be gently torn to achieve proper surgical exposure.

This ligament is much harder to rupture in dogs than cats, making it more difficult to completely expose the ovary for surgical removal. Dogs also have a deeper abdominal cavity, making it more of a challenge to exteriorize each ovary.

Despite the comparative ease of spaying cats compared to dogs, ORS is still a commonly seen phenomenon in cats. The interval between the time of spaying and the occurrence of signs of heat in cats with ORS can vary markedly. Signs of heat have been reported from a few weeks to several years after spaying.

Clinical signs occur because the remnant ovarian tissue produces hormones. In fact, the piece of ovarian tissue may even ovulate. Production of estrogen from the remnant leads to signs of heat. The signs that a cat is in heat include increased vocalization, lordosis (the mating position, with the back arched), rolling, making treading motions with the hind limbs, holding the tail to one side, attracting the interest of tomcats and allowing copulation. Of course, if a cat with ORS does allow a male to mate with her, she will not become pregnant, as there is no uterus for the fetuses to occupy.

How ORS is diagnosed

The cat’s history and clinical signs of heat are important in making a diagnosis, but these alone are not definitive. Other tests to consider are vaginal cytology, hormonal assays and abdominal ultrasound.

Hormonal tests are helpful to confirm the presence of functioning ovarian tissue. When cats are in heat, the level of the hormone estradiol rises sharply. A high level of estradiol in a supposedly spayed cat is strongly suggestive of ORS. Unfortunately, the estradiol levels fall rapidly back to baseline levels in as little as 48 hours. Therefore, blood sampling may be inaccurate if the timing of the sample is such that it doesn’t coincide with the peak period of heat.

Ultrasound may be helpful as an adjunct diagnostic test. Much of the success or failure of being able to identify ovarian tissue using ultrasound depends on the experience and expertise of the ultrasonographer, the size of the remnant ovarian tissue and the stage of the heat cycle (the ovarian tissue will be at its most visible when the cat is heat).

Surgery is the best choice

The treatment of choice is surgical removal of the piece of ovarian tissue that was left behind. The best time to perform the surgery is when the cat is showing overt signs of heat, as the ovarian tissue is easier to identify during this period.

Medical therapy for ORS is not generally recommended. Progesterone-type drugs — such as megestrol acetate — have been used to suppress heat in lieu of surgery. However, this drug has significant side effects (diabetes, mammary enlargement) and is rarely used anymore.

Because the clinical signs and history strongly pointed to this being a case of ORS, the owner declined further diagnostic testing and agreed to allow me to perform surgery. At surgery, everything looked normal on the left side of the abdomen. However, a small piece of ovarian tissue (with a follicle) was seen on the right side, just beneath the lower pole of the right kidney. I removed this piece and finished the surgery. (Ideally, the removed tissue should be sent to the laboratory for examination by a pathologist, to confirm that the tissue is ovarian in origin, but the owner declined, due to cost concerns.)

The cat recovered uneventfully and was sent home that evening. As expected, she has not shown signs of heat since.

What owners should do

ORS is a well-documented complication of spaying. For some reason, many clients wait a long time before mentioning to their veterinarian that their cat is showing signs of being in heat after spaying because the recurrence of these signs was accepted as normal behavior.

It is important that veterinarians inform owners of female cats that signs of heat should disappear completely after spay surgery. The best treatment for ORS is surgery to locate and remove the ovarian remnant, after which all signs of heat should resolve permanently. — Arnold Plotnick, DVM, DACVIM