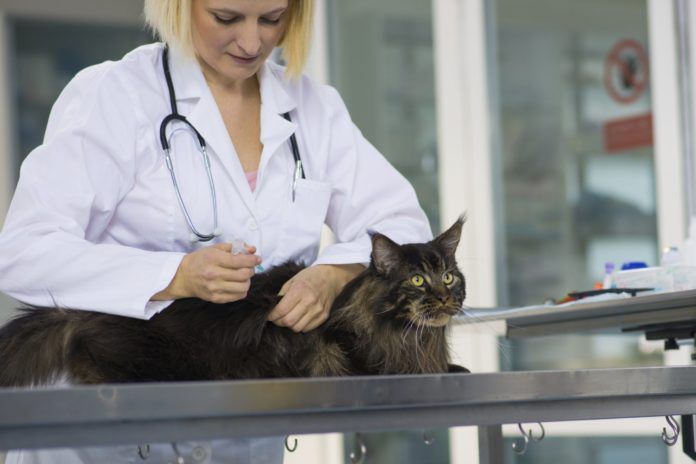 “Fever is a disorder of thermoregulation in which the hypothalamus in the brain deliberately resets the thermal set point, so that the body actively seeks to raise its temperature,” explains Michael Stone, DVM, clinical professor at Cummings School of Veterinary Medicine at Tufts University.

It’s important to distinguish fever from hyperthermia, which is an increase in body temperature caused by the body gaining heat more quickly than it can be dissipated, such as with vigorous exercise or very high environmental temperatures. With hyperthermia, the thermal set point in the brain is not adjusted upward.

In many cases, the cause of a cat’s fever is obvious. For example, cat bite abscesses — localized bacterial infections beneath the skin — are common, especially in cats with outdoor access. Many affected cats will have visible evidence of the abscess upon examination. Treatment of the abscess by lancing, flushing and administering antibiotics usually causes the fever to resolve readily.

In human medicine, the term fever of unknown origin (FUO) has a strict definition: an illness of more than three weeks’ duration with a temperature higher than 101˚F on several occasions after one week of hospitalization and evaluation.

While there is no single accepted definition in veterinary medicine, the term is generally used to describe a fever that does not resolve spontaneously, that does not respond to antibiotic therapy and for which the diagnosis remains a mystery after an initial diagnostic workup. Cats normally have a body temperature between 100˚ and 102.5˚F. Cats with FUO typically have body temperatures between 103˚ and 106˚F.

There are five major causes of FUO in cats: infectious diseases, immune-mediated disorders, cancer, inflammatory conditions and adverse reaction to drugs. Infectious causes are the most common. Cancer is less common, and FUO due to immune-mediated disease is rare in cats. Most FUOs are caused by a common illness presenting in an unusual fashion.

Why diagnosis is tricky

Determining the cause of a fever can be a diagnostic challenge, but a thorough medical history may offer the veterinarian some clues as to the origin of the fever. Historical information that may be helpful includes the cat’s vaccination status, any recent drug administration, whether the cat has traveled recently, whether there has been any potential exposure to infectious agents (from attending a cat show or being boarded) and a complete medical and surgical history.

“A thorough physical examination is of paramount importance in investigating fevers in cats,” notes Dr. Stone. “Every body system should be meticulously evaluated, with particular emphasis on assessment of the lymph nodes for enlargement, the oral cavity for dental abscesses and the retina for evidence of systemic viral or fungal infections.”

Antibiotics may be necessary

In many cases, the history, physical exam and initial diagnostic tests reveal the cause of the fever. If not, most veterinarians find it reasonable to treat with antibiotics for a presumed bacterial infection. If no cause of fever is revealed, or if the fever persists despite antibiotic therapy, the cat can truly be said to have FUO, and further diagnostic tests are warranted.

Radiographs (X-rays) of the chest and abdomen should be performed if the initial tests don’t reveal the cause of the FUO. Upper respiratory infections are usually obvious clinically — cats typically sneeze and may have runny eyes or nasal discharge. Cats with lower respiratory infections, however, may not show clinical signs initially, yet may show evidence of infection on an X-ray.

Ultrasound of the abdomen can be a valuable test, especially for detecting problems that might not be visible on radiographs alone — for example, an abscess within the liver, spleen or pancreas. Ultrasound is also helpful for obtaining a biopsy or an aspirate if any masses or enlarged lymph nodes are detected.

Fecal analysis should be performed in cats with FUO. If diarrhea is present, a fecal culture should also be performed. For example, salmonella can be a cause of fever in cats and should be considered, particularly in cats who have been fed a raw diet.

Serum samples should be submitted to test for less common infectious diseases. Testing for toxoplasmosis, mycoplasmosis, bartonellosis and feline infectious peritonitis (FIP) should be considered. FIP is a viral disease that can be particularly challenging to diagnose in some cats. The “wet” form of the disease — in which fluid commonly accumulates in the abdomen and/or chest — is easier to diagnose than the “dry” form. In the dry form, cats will develop nodular accumulations of inflammatory cells, called granulomas, throughout many of the body’s organs.

Cats with FIP usually have a persistent fever. Although FIP cannot be definitively diagnosed based on a single blood test, the information obtained from the FIP test may be helpful when interpreted in light of results from other tests.

Cats who are clinically ill with fevers may have bacteremia — a bacterial infection that has invaded the bloodstream. If this is suspected, culturing the blood may be warranted. Endocarditis — an infection of the heart valves — is a well-documented cause of bacteremia, although this is uncommon in cats. Most affected animals have a heart murmur. If blood cultures reveal bacteria in the bloodstream, the cat should be evaluated thoroughly for the underlying cause, for example, a kidney infection, bone infection, uterine infection or pneumonia.

Management of cats with FUO is based on finding and treating the definitive cause of the fever. Although antipyretics — drugs that lower fever — are given to people early in the course of the fever, they are not typically advocated in cats. There is firm evidence to support the view that fever is a beneficial, protective adaptation to the effects of infection and that “breaking” the fever with drugs may impair the cat’s immune defenses and have a negative impact on the immune response.

Fever can result in poor appetite and significant lethargy, however, and dehydration is a concern in these animals because fever increases the cat’s fluid requirements. But the common medical advice to “get lots of rest and drink plenty of fluids” is not easily applied to cats.

Some cats with FUO may benefit from hospitalization, intravenous fluids, antibiotics and aggressive nutritional support, until a cause of the fever is discovered or the fever resolves on its own. Body temperatures consistently in excess of 106˚F can cause organ damage, electrolyte disturbances and possible death if not addressed. If an antipyretic drug is deemed necessary by the veterinarian, aspirin given in judicious doses every 72 hours is often effective at controlling the fever.

Although most cats with FUO can be diagnosed and treated, the condition can be frustrating for both the owner and the veterinarian: approximately 10 to 15 percent of all cases remain undiagnosed. — Catnip staff