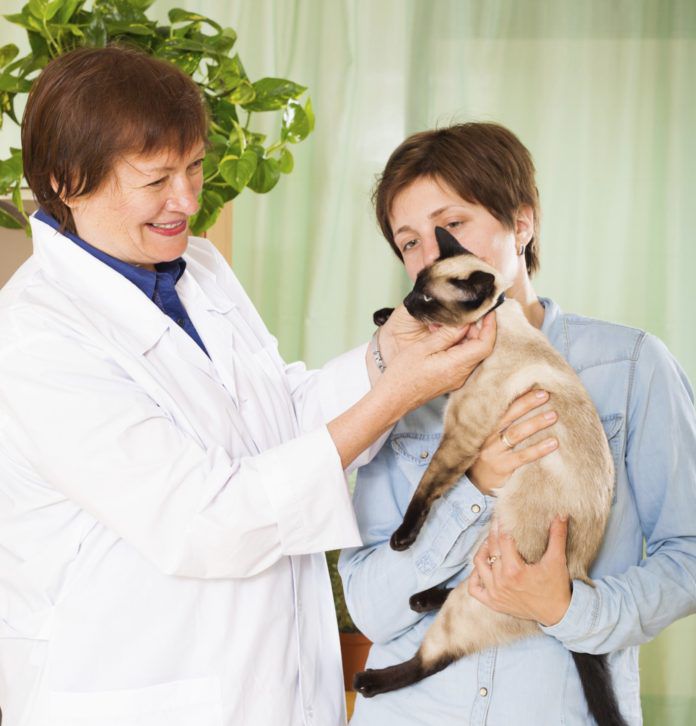 Recently, my first appointment of the morning was Gypsy, a five-year-old neutered male Siamese. The chief complaint written in the appointment book was the vague description of “hairball problem.” In the exam room, I asked the owner to elaborate. “He’s been trying to cough up a hairball for weeks,” explained Gypsy’s owner. “But nothing ever comes up.”

As a feline practitioner, I hear the incorrectly used phrase “coughing up a hairball” at least once a week. Hairballs exist in the stomach, and cats vomit hairballs. Vomiting is associated with the gastrointestinal system.

On the other hand, coughing is derived from the lungs, and is associated with the respiratory system. Thus, whenever I hear a cat owner say, “coughing up a hairball,” further questioning is always necessary to determine whether the cat is actually vomiting or coughing.

Is it a case of hairballs?

The owner described what she was seeing. “He hunkers down, extends his neck and makes a raspy noise a few times. He’s done after about a minute, and then he trots off on his merry way,” she explained. This was a classic description of a coughing cat. Any ambiguity was further dispelled when the owner told me that she had taken a video.

In this age of “smart” technology, anything can be recorded instantly — and the short video was definitive: ten seconds of Gypsy coughing his head off. I explained to the owner that there are several potential causes for coughing, but in a young Siamese cat, feline asthma is at the top of the list.

Feline asthma is a reversible respiratory condition of the lower airways, and is characterized by recurrent bouts of coughing, wheezing and labored breathing. The prevalence of the condition is approximately one percent of the general feline population. It’s unclear why, but Siamese cats are predisposed; the prevalence of asthma in Siamese cats approaches five percent.

The respiratory tract has many protective mechanisms available to combat a variety of irritants: smooth muscle in the airways that contracts, narrowing the passageway so as to prevent the irritant from migrating deeper into the lungs; glands lining the airways that secrete mucus to trap the irritant, again preventing further migration into the lung; and finally, coughing, which expels the trapped irritant.

A type of allergic bronchitis

In cases of asthma, the irritant is an allergen, making asthma a type of allergic bronchitis. Exactly what it is that the cat is allergic to can be challenging to determine, but cat litter dust, second-hand tobacco smoke, house-dust mites, molds, pollens and dust from renovation have all been implicated as triggers.

Most cats — like Gypsy — present with a history of paroxysmal coughing of several days or weeks duration. Some will also present with dyspnea (labored breathing) or tachypnea (rapid breathing). A few cats have only a brief history of coughing episodes before presenting with acute, severe respiratory compromise — the so-called “asthma attack.” These cats are in a fragile state and must be handled carefully. In some cases, it can be difficult to distinguish whether a cat like this is having an acute asthma attack or if the cat has heart disease and is in full-blown congestive heart failure.

No simple way to diagnose

Unfortunately, there is no single diagnostic test for obtaining a definitive diagnosis of feline asthma. Diagnosis is usually achieved based on the owner’s description of the clinical signs (with coughing being the most common), physical examination findings and X-rays of the chest. When X-rays are performed, asthmatic cats may show a pattern of increased bronchial markings that is often described as “donuts and train tracks.” (These represent accumulation of inflammatory cells around and along the airways.)

Other helpful tests might be a complete blood count and a heartworm test. Cats with asthma often (but not always) have increased eosinophils, a type of white blood cell that often indicates allergic or parasitic conditions. Heartworm disease — though uncommon in cats — has clinical signs that overlap with asthma. A positive heartworm test supports a diagnosis of heartworm as the cause of the clinical signs. A negative test makes heartworm less likely, and asthma more likely.

More advanced tests may be warranted in challenging cases. These include bronchoscopy, a procedure in which a tiny fiber-optic camera is inserted down the trachea and into the lungs, allowing examination of the inside of the airways. A procedure called a “bronchoalveolar wash” is usually performed at this time, as well. This involves administering a small amount of sterile fluid into the lungs, and then re-collecting the fluid and analyzing it.

In most cases, however, a presumptive diagnosis of asthma can be made without resorting to these expensive, advanced diagnostic procedures. Fortunately, Gypsy’s chest X-rays had the classic donut and train track pattern, and the complete blood count showed high eosinophils. In fact, he was a textbook case.

The most effective long-term treatment of feline asthma consists of administering high doses of steroids. The oral route is usually the first route attempted, and relatively high doses are given initially. Steroids attenuate the inflammatory response, reducing the severity of the clinical signs. Most asthmatic cats will feel and act better on the initial high dose of steroids, at which point the steroid dose is tapered over several weeks.

Steroids often have marked side effects in dogs, such as increased thirst and urination and increased appetite. Increased thirst and urination in dogs can be problematic in that they may have accidents in the house if they do not have additional access to the outdoors for elimination. However, cats are fairly resistant to these types of side effects.

It’s tempting to prescribe drugs that simply open the airways (bronchodilators) and make it easier to breathe right away — as opposed to prescribing steroids which don’t provide immediate relief, but rather, slowly dispel the inflammatory cells out of the lungs. It is true that steroids have some undesirable adverse effects — but steroids are essential to treatment.

In fact, this is what happened when inhaled bronchodilators first became available to people. Many hated taking steroids because they increase hunger and thirst, and can make some individuals bloated and irritable. Therefore, some people simply stopped taking their steroids. Then — if they had an attack and their inhaler failed — they died!

This is because they hadn’t kept up with the steroids, which remove the inflammatory cells from the lungs. Instead, they relied on symptomatic therapy (the inhalers) which simply opened up the airways and ignored the reason why they were closed in the first place — the inflammatory cells that were infiltrating them.

Proper use of bronchodilators

Similarly, it can be tempting to prescribe bronchodilators as the initial drug for the treatment of feline asthma — especially in the cats with mild clinical signs. However, this is an improper approach to treatment. The airways in cats with asthma are chronically inflamed, regardless of the severity of the clinical signs. Chronic inflammation is the root of the problem, and treatment of the inflammation is the cornerstone of therapy.

Bronchodilators, if necessary, may be used as adjunct therapy, mainly in cases where coughing begins to recur when the steroid dose is tapered. For example, many cats that are tapered to once daily steroids do well, but may experience some coughing when tapered to every other day. Rather than go back to daily dosing, adding a bronchodilator often allows successful control of the asthma on every other day dosing, which is ultimately better for the cat’s health.

Some cats are poor candidates for oral steroids, such as those with diabetes or with heart conditions. Steroids oppose the action of insulin, and have the potential to cause diabetes — if given in high doses for long periods — or to disrupt the regulation of the diabetes in cats currently being treated.

Steroids also cause water retention and expansion of the blood volume. This increased blood volume can put a strain on the heart of cats that already have compromised heart function, and may precipitate congestive heart failure. In cases like these, inhaled medication should be considered. Inhaled steroids do not cause the unwanted side effects that pills do. The inhaled molecules are large, preventing them from passing into the bloodstream from the lungs.

Steroids (and bronchodilators) can now be given effectively by inhalation to asthmatic cats. Both types of drugs are available for humans, as metered dose inhalers (MDIs). Adults quickly learn to coordinate the inhaling of the medication with the actuation (pressing) of the device, although this is much more difficult for children, and impossible for infants or cats. To alleviate this difficulty, an alternative was developed to allow children, infants and cats to use the MDIs without having to coordinate their breathing.

A spacer — a plastic chamber roughly the size of the cardboard inner tube of a roll of toilet paper —is attached to the MDI, and a face mask is attached to the other end. The spacer acts as a temporary storage area for the misted medication to sit, until the individual breathes it in. Cat owners are taught to attach the MDI and the face mask to the spacer, and then to actuate the MDI twice, filling the spacer with the mist. The face mask is gently placed over the cat’s mouth and nose, and the cat is allowed to inhale and exhale seven to 10 times with the mask in place.

Inhaled steroids are the most potent inhaled anti-inflammatory drugs available. Fluticasone (Flovent) is the most commonly prescribed inhaled steroid. Many cat owners find that giving inhaled steroids is faster — and seems to bother the cat less — than trying to administer oral medication.

Bronchodilators are also available as MDIs. Albuterol (Proventil or Ventolin) is the one most commonly used in asthmatic cats. It acts more rapidly than oral or injectable forms. It can be used daily, or as needed for asthmatic cats that are already on daily steroids but still have occasional episodes of coughing, wheezing or increased respiratory effort at rest.

Feline asthma is a respiratory condition that occurs as a result of an excessive response by the lower airways to an inhaled allergen. It is not a curable disease, but recent advances in our understanding of the disorder have allowed vets to devise more effective treatment plans, and cats are breathing a little easier as a result. — Arnold Plotnick, DVM, DACVIM