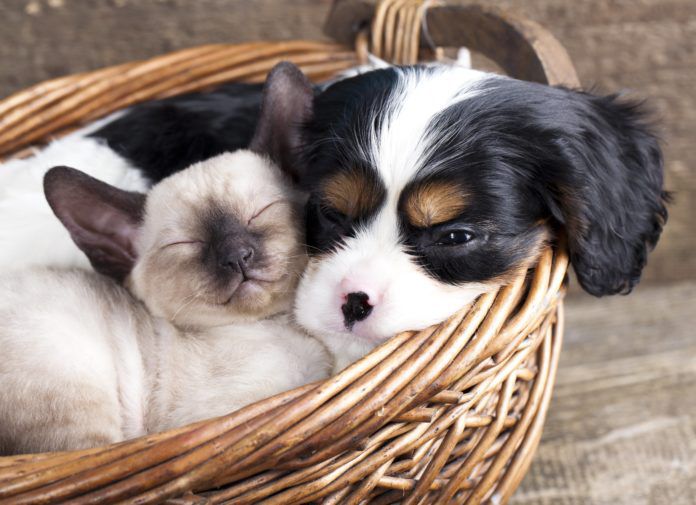 “Whenever you are introducing any two beings into a household, there is always a risk that they will not like one another,” says Dr. Borns-Weil. It’s important to keep this in mind when considering bringing a new dog into your cat’s home, understanding that “tolerance is a reasonable goal, with friendship being an aspiration,” she says.

The ideal window of time

Perhaps the greatest element of success in Dr. Borns-Weil’s household is her pets’ early introduction to each other, meeting up within the optimum time frame of younger than nine weeks for cats and 12 weeks for dogs. That’s when both are developmentally able to easily become socialized to one another, effortlessly learning to read and respond to social cues that differ from those of their own species.

But there’s more to it than just timing. Knowing what to consider in advance of bringing a cat and dog together in your household, and how to best insure that things will work out well by following some common-sense tips, can help make a friendship between feline and Fido a more assured success. But where to begin?

Before venturing into a cat-dog introduction, consider the pets that you hope to bring together. Sometimes there are characteristics that are already well-developed that may make co-existence unfeasible. “Certainly, dogs with a high predatory drive should not live with cats unless they were socialized with cats as young pups, again, before the age of 12 weeks,” says Dr. Borns-Weil.

That said, while it might make sense to not even consider bringing a dog with a history of aggression into your home, there is context to consider. Is the dog aggressive in a limited set of circumstances and only toward people or does he jealously guard his resources, such as food, toys and his caretaker, which could lead to aggression toward another pet? That’s key. And what about the context for cats?

It would not be fair to bring a naturally fearful cat or one that is getting on in years together with a dog, though if your cat has had previously positive experiences with dogs and their fear does not extend to them, things could work out fine, explains Dr. Borns-Weil.

Let’s say you’ve made your decision that your cat is going to live with a dog. Your best way to start is to provide your pets with a gradual and controlled introduction, keeping an eye on each pet’s body language so that you can gauge their response to one another, advises Dr. Borns-Weil. If both pets are adults, they should be restrained so that neither can lunge at the other. The dog should be leashed so you can easily disrupt an altercation should tempers flair, and the cat can be kept safe on the other side of a gate. This is crucial, notes Dr. Borns-Weil, who has recently seen a dog tear through a screen door.

While some say it helps to start by intentionally keeping the dog and cat in separate rooms, giving each a towel with the other pet’s scent to speed recognition, Dr. Borns-Weil notes that because both are “very olfactory animals, they will instantly be aware of each other’s presence regardless of the towels, most likely.”

Certainly, it is possible to put very young kittens and very young dogs together “without a long preamble, if you will, and just under close supervision to prevent situations in which they might overwhelm each other,” says Dr. Borns-Weil.

If you have an alpha dog or cat, recognizable by being first at all times to get resources, to walk ahead outside, or get the sunny spot for napping, you need not assume that that behavior will carry over in a cat-dog introduction or later on in the developing friendship. Hierarchies, to the extent that they exist among dogs and cats, are specifically within the species and do not involve members of other species, says the doctor.

When will you know it’s okay?

You’ll get feedback from watching how the two interact with each other. The pace must be set by the animals and not by your desire for them to get along. If you introduce calm, confident cats and dogs with a history of socialization to the other species, things should progress quickly. But if you are trying to bring together fearful and/or unfamiliar animals, a working relationship may require months of behavior modification — for example, teaching your overly frisky dog to come to you for attention rather than to the kitty — before they come to accept each other, according to Dr. Borns-Weil.

There have been a few times when Dr. Borns-Weil has had to advise clients that their pets should either be kept separate at all times or that one pet should be re-homed. When separating pets to try to get things to a more amiable level, it is important to make sure that both are getting plenty of time and attention from their owners so that neither is treated like a second-class citizen. Hurt feelings and jealousy will not help things along.

Stay calm and patient. In some cases, even what might seem to be an untenable situation can be managed. Dr. Borns-Weil worked with a client whose dog’s instinctive predatory behavior caused her to lunge at the cat. A basket muzzle was put on the dog, and a leash kept on her at all times so that when she moved quickly toward the cat, her movement could be stopped by a quick stepping down on her leash and rewarding her for doing an alternate behavior, thereby conditioning her to stop lunging toward the cat. To make sure things remain safe, the basket muzzle has been kept on in the home for now, but the dog has accepted it without anxiety or frustration, relates Dr. Borns-Weil.

We know of another dog who returned home from being boarded and found three new cats nestled comfortably on her favorite part of the couch. In less than a week of lunges and chases followed by well-aimed retaliatory swats from the cats, all four started peaceably napping together on their part of favorite couch. The dog even took on a motherly role, allowing one of the cats, who was sickly and thin, to nestle into her belly for warmth.

Such happy endings can’t be guaranteed, but even if a cat and dog need to make a separate peace, things often work out. — Constance Lindner