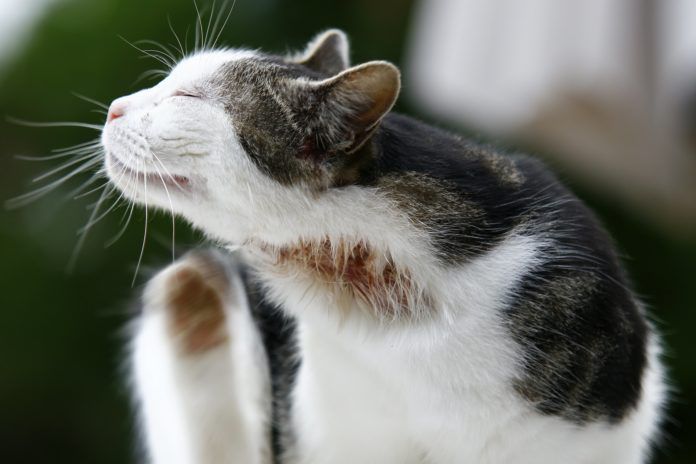 Among all external feline parasites, the cat flea (Ctenocephalides felis felis) is by far the most common, and the presence of these minute critters — vast numbers of them — in a cat’s fur and on the animal’s skin is very likely to be exceedingly uncomfortable. Still worse, flea bites can cause such severe, persistent scratching that the skin becomes abraded and vulnerable to infection.

And these tiny, wingless creatures often carry infectious agents — tapeworm eggs, for example — that they can deliver into a cat’s system when they poke their snouts through the epidermis. Disorders caused by or associated with flea infestation are very common, says Michael Stone, DVM, clinical professor of small animal medicine at Tufts. “We see them every day,” he notes, pointing out that all cats are potentially susceptible.

However, he adds, cats who spend all of their time indoors are far less prone to infestation than those who are free to roam outdoors regularly. The peak flea season varies with geographic area, and your veterinarian can give you advice about your own area. In the south, fleas can be a problem year round, but in more northern area, it is largely restricted to warmer months.

According to some estimates, entomologists have identified 2,000 or more types of fleas, including dog fleas, human fleas and rat fleas, in addition to cat fleas. However, it is C. felis felis that is most problematic when it comes to flea infestation in cats. The adult cat flea is a tiny, brownish, wingless creature, ranging in size from that of a pinhead to about one-eighth of an inch long. It has a slender, flattened body; short antennae; a strong, saw-toothed jaw; a slender, tubular, sucking snout; and powerful legs that facilitate its main mode of locomotion — jumping.

A flea can leap as far as seven feet — far enough to hop easily onto a passing animal. The flea’s mouth is made up of three sections: two petal-shaped parts (laciniae) that close down around a central mouthpiece — the epipharanx. The laciniae pierce through the host’s skin, while the epipharanx pierces a blood vessel and sucks the host’s blood.

A flea’s life cycle lasts about one month, though the insect can survive longer than that, depending on temperature and humidity. (It prefers a warm and moist climate.) During the cycle, the insect moves through a complete metamorphosis — from egg to larva to pupa to adult — and is most dangerous in the adult stage, when females need blood to complete their reproductive cycle.

After feeding on an animal’s blood, adult females reproduce speedily and efficiently, typically laying hundreds, perhaps thousands, of eggs at the rate of about one per hour over the course of several weeks or months. A female will usually have a blood meal, lay a few eggs, have another blood meal, lay some more eggs, and so on. The eggs soon hatch into larvae, and the blood-nourished larvae spin cocoons, within which — as pupae — they mature. When the environment is appropriately warm and moist, the cocoons burst open to yield more adults to perpetuate the cycle. Under ideal conditions, a mating female will lay at least 20 eggs a day, half of which become females. This can eventually produce about 20,000 new adult fleas within just a few months.

The consequences and clinical signs of flea infestation, Dr. Stone points out, vary widely. In 90 percent of cases, he notes, an affected cat can harbor thousands of fleas without showing significant signs, except for persistent itching and scratching. But because cats are grooming animals and have very sharp claws, they can quickly develop skin lesions. Unless the infestation is relieved promptly, he says, the animal will soon become “unsightly and obviously uncomfortable but will show no signs of illness.”

For about 10 percent of cats, however, the consequences are more severe. These animals, says Dr. Stone, are afflicted with flea allergy dermatitis, the major sign of which is “terrible itching” and the emergence of distressful signs — reddish, crusty bumps, for example — even in areas that have not been savagely scratched. The lower back, thighs, abdomen, head and neck are among the areas most commonly affected.

Obsessive scratching is the clearest indication that a cat is infested with fleas —especially if the weather is warm and muggy. On close inspection, the insects can be seen with the naked eye, usually on the belly, back or near the tail. Another sign of infestation, says Dr. Stone, is the presence of flea feces. “The fleas suck the host’s blood,” he notes, “and deposit the feces in the cat’s fur. The feces look like little black commas, and if you put them in water, they’ll ooze a reddish bloody liquid.”

Fleas may also by detected by having the cat stand on a large piece of damp white paper or a white pillowcase and running a fine-toothed comb through her coat. The fleas, along with small black specks — the feces — will be visible on the white background. Dr. Stone notes that a cat’s persistent scratching along with the sight of fleas and their excrement is enough to “absolutely” indicate the presence of the insects. Infestation can readily be confirmed by a vet.

A wide variety of effective products for flea prevention and treatment have been developed over the past two decades, including preventives that circulate in the blood. Others are designed to cover the cat in an insecticide. These products, however, must be selected with great care — preferably under the guidance of a veterinarian —since some of them are designed for dogs and can be toxic if ingested by a cat.

“A whole bunch of products — sprays, powders, dips — are available,” says Dr. Stone. “But owners must be aware that they should only choose a product that is labeled specifically for use in cats.”

One category of products includes drugs called insect growth regulators (IGRs), which control flea reproduction by killing the insect’s larvae. These products — such as Program and Nylar — are delivered into a cat’s system orally, by injection, or via a collar that the cat wears around her neck. However, notes Dr. Stone, “I don’t find IGRs to be critical to the success of flea treatment.” Instead, he recommends products that fall into the category of adulticides — substances that kill adult fleas rather than their larvae.

The products in this category that he recommends include topical preparations (Advantage and Revolution) that are applied monthly; Comfortis, an oral preparation that is given monthly; and Seresto, which is contained in a collar that lasts for eight months. “I will choose one of these products,” he says, “based upon the owner’s preference, ability to administer it, and its convenience.”

Such products can certainly go a long way toward relieving a cat’s discomfort and minimizing the serious health problems that might result from flea bites. However, Dr. Stone points out, owners who treat an indoor-outdoor cat with an IGR or an adulticide without making an effort to discourage recurring infestation in the environment will never resolve the flea problem.

Skunks, raccoons, feral cats and other wildlife will continue to seed the outdoor environment with fleas. “And if your cat is allowed to constantly go outside the home, she’s going to get fleas all over again,” warns Dr. Stone. — Tom Ewing