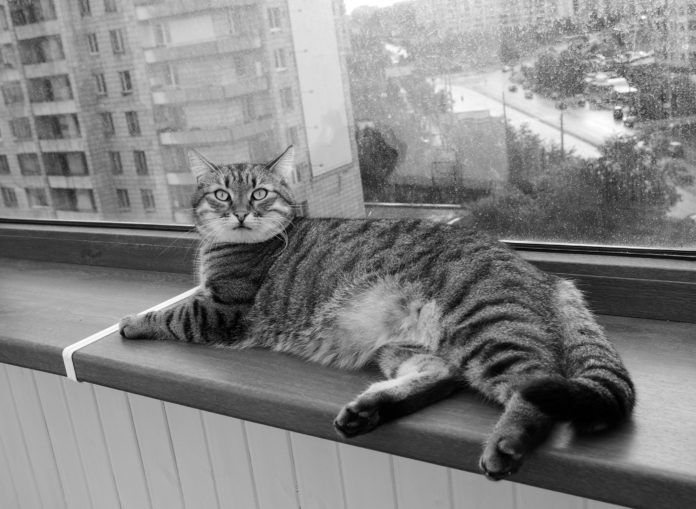 Each day, dozens of injured or severely ill animals in urgent need of emergency medical care are brought by their owners to the Cummings School’s Foster Hospital for Small Animals. Unfortunately, it’s not uncommon for cats of all ages to be brought in due to blunt or penetrating head injuries.

“Head trauma is fairly common in cats,” says Armelle de Laforcade, DVM, associate professor of emergency and critical care in the department of clinical sciences at Tufts and the overseer of emergency services at the Foster Hospital. “The animals we most frequently see are those that have been hit by a car or maybe even a bicycle. Another relatively common kind of head injury — especially in cities — is something that we call ‘high-rise syndrome.’

“Cats sit on windowsills in tall buildings and fall to the ground. These are the two main causes, but there are others as well. A cat that sleeps on a couch can get sat on. A kitten can be accidentally kicked by its owner. Or a vase or other heavy object can fall off a shelf and hit the animal on the head, causing concussion. We don’t see cats with head trauma every day, but it certainly can be considered a regular occurrence.”

Any Cat is at Risk for Head Injury

Regarding risk factors for head trauma, Dr. de Laforcade observes that all cats are vulnerable. However, she points out, “If you look at the demographics, you may see that young male cats are at greatest risk. But that’s simply because young males have a tendency to roam — and any cat that goes outside its home is more likely than a strictly indoor cat to be hit by a car.”

Upon admittance to the emergency room, an injured cat will initially be examined to see whether it is in shock — such signs as an abnormally rapid or abnormally slow heartbeat and pale gums. “For possible head trauma,” says Dr. de Laforcade, “we will look for evidence of trauma on the face — swelling, bleeding around the mouth or nose, and broken teeth. The whites of the animal’s eyes may be red due to bleeding in the sclera, and the eyes can be so swollen that they actually protrude. This is not usually a diagnostic challenge.

“Where we start to worry about brain injury is when we have cats that are exhibiting altered mental functioning. They are very depressed or minimally responsive. They aren’t really responding to the environment. If that is the case, we worry that the head injury might be extensive enough that it has caused brain injury, so then we have to look for clinical signs that indicate that the brain might be swelling.”

Cats that have experienced head trauma will tend to be collapsed and unresponsive, she adds, but they will not typically lose consciousness. “If a cat is unconscious,” she points out, “that would be uncommon and probably very severe. I would suspect that there are many cats that experience head trauma and never make it to the hospital. Many of the ones we see probably just got slightly bumped by a car.”

Diagnosis of a suspected brain injury can be confirmed or ruled out by means of a computed tomography (CT) scan, which uses X-rays to create detailed images of internal structures, including the brain. For a number of reasons, however, this approach is infrequently used for diagnosing feline brain trauma at the Foster Hospital.

“We have a CT scanner,” says Dr. de Laforcade, “and we occasionally use it to look for evidence of brain injury in a cat — bleeding in and around the brain, for example. But we don’t use it frequently. For one thing, the procedure is costly — about $800, plus the cost of anesthesia — and owners aren’t typically game for that kind of cost. A CT scan for a cat requires that the animal be put under general anesthesia so that it remains still during the procedure. And it’s not always the case that an injured cat can be safely anesthetized for as long as the imaging requires.”

If an owner declines to invest in a CT scan or other measures that would support a conclusive diagnosis, Dr. de Laforcade says that she and her staff will do their best with “symptomatic treatment,” using medications and other measures to relieve such consequences of head trauma as pain, shock and swelling of the brain. She points out that “injured cats can look really bad with head trauma and possible brain injury — swollen faces, bleeding noses and mouths, bloodshot and protruding eyes. But once these things resolve with supportive care, the cats can eventually do very well.

“Unless there is significant brain swelling — if it’s just a matter of wound healing — many cats that have experienced head trauma may be feeling better within a week or two. Others may take months to recover, and during that time they may be neurologically altered to the point where they can’t eat, drink or use the litter box properly.”

During this extended recovery period, Dr. de Laforcade explains that the owners of a neurologically altered cat will have to carry the extra burden of properly caring for the patient. “And it takes a very special family to do that,” she says.