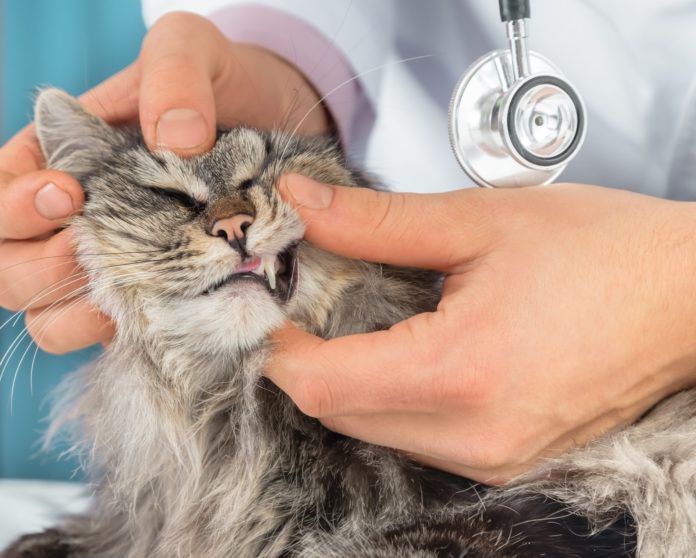 A common reason clients bring their cat in to my cats-only veterinary hospital is halitosis (this is the medical term for bad breath). Cats are carnivores, and given their meat- and fish-based diets, nobody expects a cat’s mouth to be minty fresh. But some cats’ mouths have a smell that goes beyond simple fish-breath.

This was the case with Bowie, a two-year-old neutered male cat. Bowie is an affectionate cat, and he likes to show his affection by coming up to your face and head-butting you. Bowie’s owner used to adore this sweet sign of affection. However, now when Bowie approached your face with his, you could smell him coming.

The most common cause of bad breath in cats is dental disease. Over time, tartar will build up on a cat’s teeth, accompanied by gingivitis — inflammation of the gums. But Bowie was only two years old, which is a little young for dental disease bad enough to smell across the room.

Upon examination of Bowie’s mouth, there was barely any tartar on his teeth. His gums, however, were shockingly inflamed. This was no ordinary gingivitis. Examination of the back of his throat was equally alarming, with an appearance that can only be described as “raw hamburger.” Bowie’s diagnosis was clear: He had feline chronic gingivostomatitis (CGS). (Stomatitis is the medical term for inflammation of the mouth.)

The causes of CGS

Feline CGS is a painful inflammatory condition that causes a great deal of discomfort to many cats. No one is certain what causes CGS, but it’s most likely a combination of several factors. One theory is that some cats’ gums are hypersensitive to bacterial plaque. Small amounts of plaque will cause the immune system to overreact and mount an extreme inflammatory response, sending large numbers of inflammatory cells into the gums and oral tissues.

Suppression of the immune system has also been theorized as a cause or contributing factor in CGS. This could be caused, for example, by infection with the feline leukemia virus (FeLV) and/or the feline immunodeficiency virus (FIV). Other infectious causes have been implicated, including feline calicivirus (FCV) and a bacterium called Bartonella henselae, although Bartonella’s role in the disorder hasn’t been clearly defined.

Oral pain is probably the most common sign of CGS. This can manifest in a variety of ways. For instance, some cats may have trouble eating, or may even stop entirely. Some will drool, with the drool sometimes being blood tinged. Some cats approach the food dish as if they’re interested in food (which they usually are), but then run from the food dish, or recoil from the food because eating is painful.

Other cats will paw at their mouths and may develop an aversion to having their faces touched. Other cats stop eating their dry food because it becomes painful to chew, preferring only canned food. (Tip: This is often misinterpreted by the owner as “finicky” behavior.)

Cats are generally stoic and secretive about their illnesses, showing their discomfort in subtle ways, such as being reclusive, irritable or aggressive. Grooming may become uncomfortable so cats may develop an unkempt hair coat.

A definitive diagnosis of CGS is achieved by biopsy of the affected tissues during a thorough oral examination, although a presumptive diagnosis can often be made based on visual inspection of the mouth. General findings include extremely red, proliferative (swollen and overgrown) and ulcerated oral tissue that bleeds easily when touched. The gums are nearly always involved, often accompanied by inflammation of other oral tissues, such as the roof of the mouth and the fauces (the lateral walls at the back of the throat that surround the tonsils).

Various degrees of dental and periodontal disease may be present, as this often contributes to the progression and severity of CGS. Oral X-rays may reveal the presence of retained tooth roots and resorptive lesions — painful tooth erosions similar to cavities.

Affected cats are in pain and need some form of treatment. The goal of treatment is to decrease the inflammatory response. Because a hypersensitivity to dental plaque is believed to be a prime factor in triggering CGS, a thorough dental scaling and polishing should be performed. Unfortunately, even with thorough, regular dental scaling, the condition often progresses. Antibiotics and anti-inflammatory steroids are of some benefit in many cats, however, the use of these drugs usually offers only short-term relief.

Eventually, most cats become non-responsive to medical treatment. Although it sounds drastic, numerous studies have confirmed that the most successful way to control CGS is to extract all of the affected teeth. A recent study showed that full-mouth tooth extraction provided substantial improvement or complete resolution of CGS in more than two-thirds of affected cats. Clients often worry that their cat won’t be able to eat after full-mouth extraction, but most cats tolerate extractions very well and can eat moist food readily, with many cats able to crunch on dry food after the extraction sites have fully healed.

Unfortunately, approximately 10 percent of cats show minimal improvement even after full-mouth extraction. These cats are very challenging to treat. Anti-inflammatory corticosteroids such as prednisolone can be given in an attempt to control the inflammation, but long-term use of corticosteroids may lead to undesirable side effects such as diabetes.

Cyclosporine is a potent immunosuppressive drug that, in a recent study, was shown to cause significant clinical improvement in affected cats, especially if the cat had not received corticosteroids previously. Transient vomiting and diarrhea are occasionally reported as side effects of cyclosporine in a few cats. Unfortunately, cyclosporine is relatively expensive.

Feline recombinant interferon omega has also shown promise in some cats with refractory CGS. Studies have shown it to be as effective as the corticosteroid prednisolone in decreasing the clinical signs of CGS, but with no adverse side effects. Recombinant feline interferon omega is not yet commercially available, but it may be obtained in the U.S. through the FDA’s Compassionate Use Program.

Carbon dioxide (CO2) laser therapy has been described as an adjunct treatment modality for refractory cases of CGS. The laser chars the inflamed tissue, resulting in scar tissue formation. The scar tissue is less likely to become inflamed over time. Obviously, this is an advanced procedure that needs to be performed at a referral center by a veterinarian proficient in the use of this laser.

Another potential new therapy on the horizon is the use of stem cells. Stem cells derived from adipose (fat) cells are termed adipose-derived mesenchymal stem cells (ASC). In a recent study, seven cats received an intravenous infusion of stem cells. They stayed in the clinic for one or two days to be monitored for adverse reactions.

A month later, they received a second infusion, same protocol. Five of the cats responded to treatment: Three showed complete remission and two showed substantial improvement. Stem cell therapy is relatively new in veterinary medicine, and treatment protocols still need to be standardized before they can be used routinely. However, this study in cats suffering from CGS was encouraging.

Management of CGS can be challenging. Full-mouth extraction continues to offer the best hope of successful treatment, which is how Bowie was ultimately treated. He was sent to a referral center for a full-mouth tooth extraction, and he has been a new cat ever since. — Arnold Plotnick, DVM, DACVIM