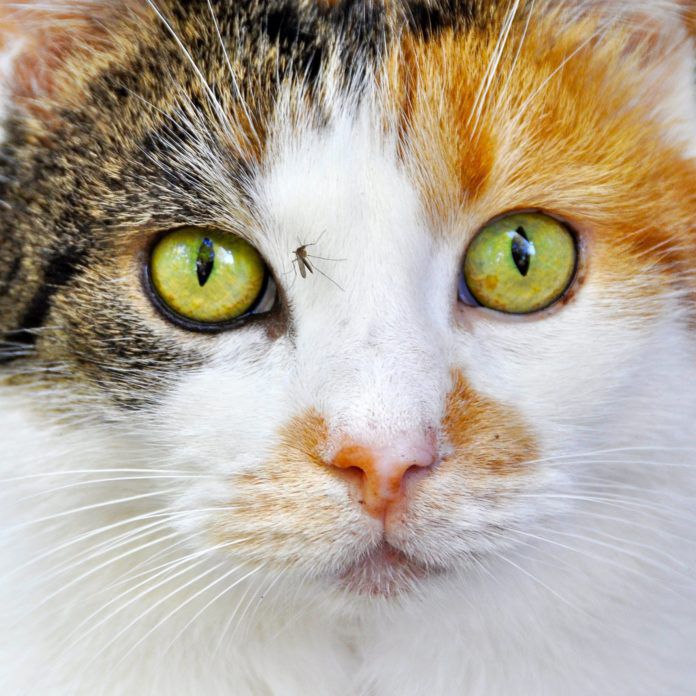 Among the disorders that can seriously impair the function of your cat’s cardiovascular and pulmonary systems, one of the most severe is feline heartworm disease, a potentially life-threatening condition caused by infection with a parasitic worm called Dirofilaria immitis. This insidious disease is known to be most prevalent in geographic areas where a hot, muggy climate accommodates the proliferation of mosquitoes.

Heartworm disease is now recognized as a threat to cats in all areas of the U.S., especially during the warmer months of the year.

Although the term used to identify the infection suggests that the consequences mainly affect the heart, the worm can cause a wide variety of health problems that involve an infected animal’s lungs, liver and kidneys as well as the heart. According to Michael Stone, DVM, clinical professor of small animal medicine at Tufts, the mature parasite eventually resides, for the most part, not in the heart, but in the pulmonary arteries.

These conduits carry blood from the heart to the lungs, and among the serious health threats associated with the parasite is the development of blood clots in the lungs. However, most worms that invade a cat’s system do not survive to the adult stage. Cats who are harboring adult heartworms typically have just a few worms.

Feline heartworm infection typically occurs according to the following pattern: A mosquito bites an infected animal, ingests the parasite’s larvae, which are in the infected animal’s blood, and then bites and thereby infects the new victim. (Dogs, cats and ferrets are the most common among heartworm hosts, although the parasite also thrives in the blood of wolves, foxes and coyotes.)

Over time — typically about eight months — these larvae thrive and develop in the bitten cat’s body, initially in the subcutaneous tissues, then in the muscle tissues, and eventually in the heart and pulmonary arteries.

All cycles are problematic

Even when the worms are immature they are able to mate, with females releasing their offspring — called microfilariae — into a victim’s bloodstream, where they continue to develop. But the worms can cause problems before they are fully grown: Between 60 and 100 days after the initial infection, signs of pathology in an affected animal’s body may be apparent, even though the parasite has not yet reached maturity, which typically occurs within a year or so. However, most worms that invade a cat’s system do not survive to the adult stage.

Within six or seven months, however, the surviving white, thread-like worms grow large enough to be visible. When fully grown, males are typically four to six inches in length, while females may be as much as a foot long, and the various feline disorders brought on by heartworm infection are largely attributable to the impressive size of the parasite. In an advanced infection, the worms damage the walls of the pulmonary arteries and impede the passage of blood through them, which results in excessive strain on a cat’s heart as it attempts to pump blood through the packed vessels.

In some cats, a heartworm infection may disappear spontaneously, possibly because an animal has developed an immune response that is sufficiently strong to kill the parasite. In most cases, however, the infection will progress inexorably, with nonspecific clinical signs that may mimic many other feline diseases. “Heartworm infection in cats,” says Dr. Stone, “can run the spectrum from being asymptomatic to causing a cough to sudden death.”

Common signs to look for

The most common clinical signs of heartworm infection include coughing and gagging, intermittent vomiting, diarrhea, rapid and difficult breathing, loss of appetite, lethargy and weight loss. In some cases, a cat may survive a heartworm infection for an extended period of time before succumbing to another feline disorder. In an acute case of the disease, a cat may die suddenly.

Diagnosis of feline heartworm infection will typically include a complete blood count and blood chemistry profile, a test to determine whether the patient’s blood contains antibodies to the parasite and a test to see whether heartworm larvae proteins are present in the blood.

How it’s treated in cats

In addition, ultrasound and X-rays may reveal the presence of heartworms in the heart or pulmonary vessels. Unfortunately, heartworm disease in cats is untreatable; while powerful drugs are regularly used to rid dogs of heartworms, these drugs could be fatal to a cat that ingests them. “In most cases,” explains Dr. Stone, “we treat supportively, using medications that help the cat to tolerate the presence of the worms without directly treating the heartworm itself.”

Most cats who are diagnosed with heartworm infection, but are not manifesting severe clinical signs, will be monitored to see whether the condition might resolve itself spontaneously. Cases in which there is evidence of disease in the lungs and associated blood vessels can be monitored with periodic chest X-rays. Supportive therapy with small, gradually decreasing doses of prednisone may be recommended for cats with clinically confirmed evidence of lung disease. Cats with clearly apparent signs of heartworm disease may require additional supportive treatment in the form of intravenous fluids, oxygen therapy, cardiovascular drugs and antibiotics.

“Although heartworm disease is very difficult to treat in cats,” says Dr. Stone, “it is easy to prevent.” The key to providing year-round protection against feline heartworm disease — especially in the warm, muggy sections of the U.S. whose climates promote the proliferation of mosquitoes — is the routine administration of preventive medications such as selamectin, milbemycin and ivermectin to all cats in a household.

Cat owners can obtain additional information regarding this all-too-common feline disease by visiting the web site of the American Heartworm Society at www.heartwormsociety.org. — Tom Ewing