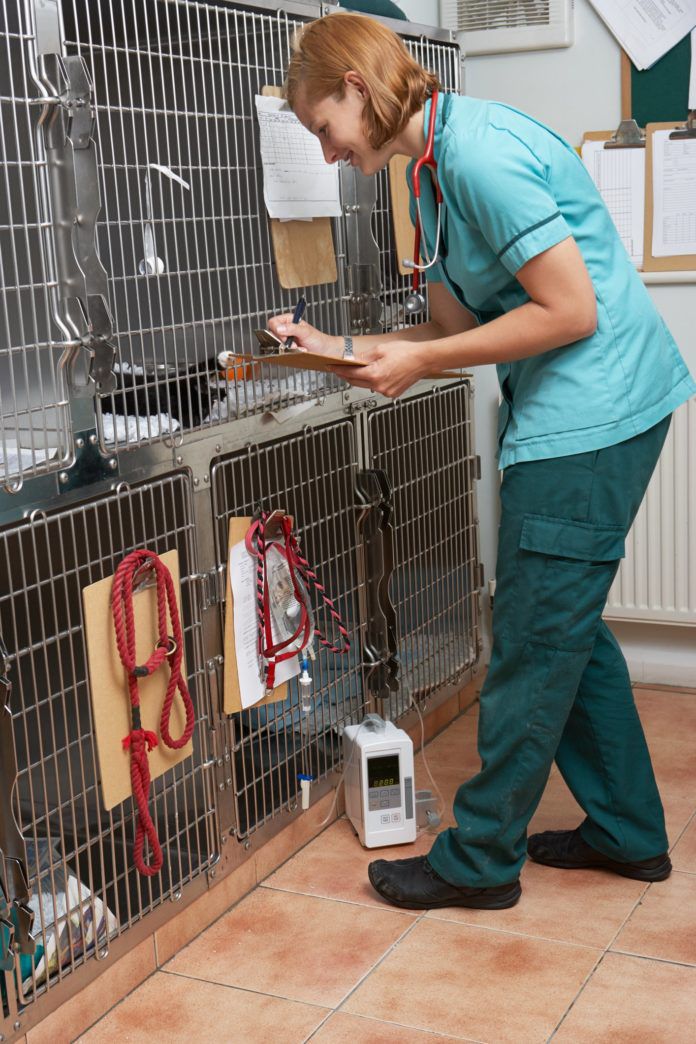 Virtually all feline surgical procedures — whether brief and relatively simple or lengthy and complicated — require that the patient’s pain perception be dulled, if not totally blocked, by an anesthetic drug of some sort.

These days, sleep-inducing chemical substances are commonly used by veterinarians to reduce or eliminate pain in procedures ranging from such complex interventions as the excision of a brain tumor or the removal of a mass in the chest to such comparatively straightforward procedures as routine spaying and neutering and dental care.

Desensitizing a cat with anesthesia may also be necessary in such relatively simple, noninvasive procedures as examining her ears or changing her bandages — especially if the animal is extraordinarily hypersensitive or excitable. Additionally, cats must be totally anesthetized so that they lie completely still during diagnostic procedures such as magnetic resonance imaging (MRI) or computer tomography (CT) scanning.

When anesthesia is required
The administration of anesthesia in cats, as in humans, may be either for sedation only or for general anesthesia, depending on the nature and duration of a given procedure, explains Dr. Cheryl Blaze, BVSc, a specialist in anesthesia and pain management at the Foster Hospital for Small Animals. “There is also the option of using anesthesia locally,” she says, “in which you inject an anesthetic drug into one specific site in order to prevent the nerves in that area from transmitting pain impulses to the brain. This would normally be done while the animal is fully anesthetized to produce a greater degree of pain relief when she wakes up.” With a general anesthetic, she explains, the pathways to the nervous system that transmit pain from its source to the brain remain intact, but the brain itself is put to sleep, and the patient will not register the pain.

“You usually don’t have to use general anesthesia for very simple procedures,” says Dr. Blaze, “because good sedation would be sufficient. But for any kind of surgery — where you’re making incisions, for example, or for dentistry, in which the animal must be completely still — you need general anesthesia.”

For a simple procedure of comparatively short duration in which sedation may be sufficient, she explains, the anesthetic drug would be injected into a muscle or, in some cases, a vein. “This method would be appropriate for a procedure such as a painful ear examination and cleaning,” she says, “or maybe a shallow leg laceration, when you just have to clean the wound and sew it up.”

A wide variety of pain-inhibiting medications are available for use during feline surgery. They are administered by injection into a muscle prior to anesthesia and, depending on the complexity of the procedure, may also be injected into a vein during the surgery (intravenous infusion). Commonly administered agents include fentanyl, a morphine-based compound (opioid) that is used for general pain relief; lidocaine, used in a local anesthesia block of a specific area (generally not intravenously); and ketamine, an injectable tranquilizer and pain killer. Many other drugs are available, however; they are selected by the attending veterinary surgeon or anesthesiologist depending on the patient’s age, general health and the nature of the surgical procedure.

In general, the drugs differ according to the organs that they affect, the speed at which they work, and the time it takes for the effect of the anesthetic drug to wear off postoperatively. “You select which drug you’re going to use according to which one will be best for that specific patient,” says Dr. Blaze. “If a cat has a heart murmur, for example, we wouldn’t use ketamine, which can cause problems with cardiac rate and rhythm.”

A newer addition to the list of effective anesthetic drugs, she notes, is Alfaxan, which was approved by the U.S. Food and Drug Administration in mid-2014. “You can inject this drug into a muscle to cause initial sedation,” Dr. Blaze explains, “and then use it again 20 minutes later intravenously to put the cat completely to sleep. This makes things a lot easier in instances when you don’t want to use more than one drug or if there is a specific condition that makes other choices less than ideal.”

A strong safety record
According to Dr. Blaze, if a cat is in generally good health and if the drugs are used properly, it is extremely unlikely that anything will go wrong with the delivery of anesthesia. Advanced age by itself does not mean that anesthesia cannot be tolerated; the risk depends totally on the medical condition of the animal, young or old.

The results of a study published in the Journal of the American Animal Hospital Association that involved tens of thousands of cats showed that for every 1,000 deaths occurring during or subsequent to feline surgery, only one could be directly associated with the use of anesthesia.

This impressive safety record is largely attributable to gains during the past half-century in understanding the medications that are used in feline anesthesia and the techniques employed for carefully monitoring the condition of an animal that is under the influence of those medications. — Catnip staff

The Steps Involved in General Anesthesia
General anesthesia that employs intubation is typically used for more prolonged surgical procedures. The following steps are involved (although there is variability in the bloodwork done prior to anesthesia and the monitoring used during anesthesia):

– On the day before or the morning of surgery, the patient is given a thorough physical exam and undergoes a blood test to determine, above all, that she is not anemic and that her organs will function properly once her brain has been anesthetized. (“If you have a young cat,” says Dr. Blaze, “there’s not a lot you have to be concerned with. But if you have an older cat — especially if she has a heart murmur or some other medical condition — various tests will be done to make sure that a specific anesthetic drug will be safe for her.”)

– The cat is then given an injection that will sedate her, making her calm and drowsy but not asleep. This is done to prevent unnecessary stress as well as to relieve pain.

– A short time later, the cat is given another injection intravenously via a catheter that makes her fall into a deep sleep.

– When the cat is unconscious, a tube is inserted into her trachea — the respiratory channel leading to the lungs. The tube is needed to ensure that the passage to the lungs remains open and allows the cat to receive a steady supply of oxygen while anesthetized.

– The cat is then connected to a device enabling the inhalation of a mix of oxygen and anesthetic gas during the course of the procedure as the initial, injected anesthesia wears off.

– Next, equipment is attached to the cat that will allow constant monitoring of her heartbeat, blood pressure, cardiac rhythm, oxygen saturation and body temperature throughout the procedure.

– Finally, after the area of the cat’s body that is to undergo surgery is clipped and scrubbed, the cat is wheeled or carried into the operating room. The typical preoperative routine will take 45 minutes to an hour to complete.

Following surgery, the patient will gradually emerge from her slumber and be fully awake within a half-hour to an hour. “There shouldn’t be any anesthesia after-effects 24 hours following the procedure,” says Dr. Blaze. “All of the drugs we use should have worn off within that time. Usually, however, we’ll keep the cat under some sort of pain medication following surgery.” In a large hospital, operating room personnel may include a veterinary anesthetist, whose sole job is to monitor the unconscious patient’s stability.

Very close attention is paid to every aspect of the cat’s body systems so that any changes are noted and any necessary adjustments are made to the delivery of an anesthetic. In smaller clinics, this will usually be the responsibility of an assistant who will be handling other operating room tasks as well. Cat owners should take comfort in knowing that all licensed vets are qualified to administer or oversee the administration of anesthesia.