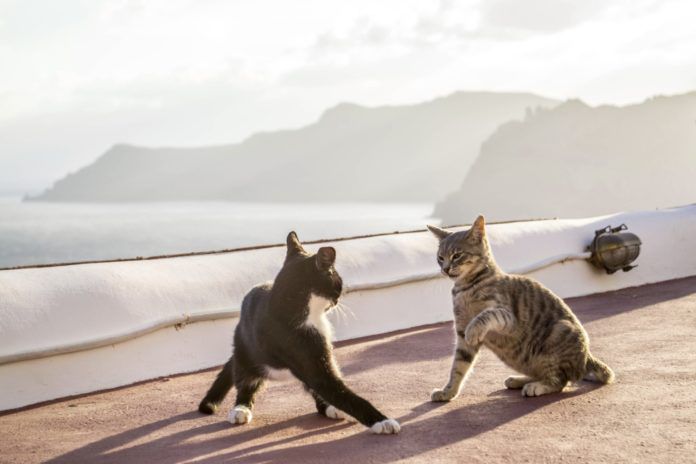 Your feisty cat Big Ben seems out of sorts. For the past few days, he’s been hanging around the house, uncharacteristically lethargic and disinterested in his food. While petting him, you feel a small but distinct lump just to the side of his tail.

You probe it gently, but Big Ben lets out a yowl, followed by a hiss. Obviously, this small lump is causing him pain. It’s very likely that you’ve discovered an abscess – a clear sign that Big Ben is harboring an infection (and also a grumpy mood).

Fights are common cause

An abscess is a localized collection of pus – that sticky, smelly, yellowish fluid that forms at the site of an infection. Although pus often contains a certain amount of cellular debris and dead tissue, it is composed mostly of white blood cells, which are trying to combat invading bacteria and other microorganisms.

“Most abscesses are associated with bite wounds afflicted by other cats,” explains Michael Stone, DVM, clinical assistant professor at the Cummings School of Veterinary Medicine at Tufts University. “Cats are territorial creatures and fighting seems to be in their nature. When the skin is punctured by a sharp feline tooth, a small puncture is made and bacteria are pushed deep under the skin. If the infection were able to leak out, there wouldn’t be as much of a problem. But the skin frequently heals over the puncture and a buildup of infection occurs under the healed wound. Intact skin, with a puncture wound, is invariably found over an abscess after the cat’s hair is clipped.”

By far the most likely victims are unneutered males. Intact females and neutered animals of either sex may also get into occasional fights, but unneutered males tend to be aggressively territorial and are more inclined to brawl with an interloper.

If an abscess is to develop, it will usually be about three days after a cat has been bitten. An abscess will often appear as a rounded, possibly painful swelling just below the skin surface, typically a half-inch to an inch in diameter. Although they may appear anywhere on an animal’s body, abscesses are most frequently located on the limbs, face, base of the tail and back.

According to Dr. Stone, signs of infection include decreased appetite, listlessness and perhaps hiding. “A soft, fluctuant swelling can be discovered by observation or palpation under the cat’s skin,” explains Dr. Stone. “Occasionally, the wound bursts and a draining wound is discovered.”

A visit to the veterinarian

An abscess of any size should be treated by a veterinarian. By delaying treatment, it is possible for an abscess to grow and allow the infection to spread systemically, with potentially lethal consequences for the cat.

During this visit, your veterinarian will make sure that the injured cat receives a thorough examination, followed by the lancing, draining and cleansing of the abscess and underlying tissue. “Antibiotics are often prescribed, and a prophylactic rabies vaccination will be administered,” says Dr. Stone.

Lancing an abscess will usually take between 15 minutes to a half-hour. For a small abscess, a cat may not need to be fully anesthetized – sedation and local anesthesia is often sufficient. For larger abscesses, however, the cat will need to be totally anesthetized for the duration of the procedure.

The good news for Big Ben and other such afflicted cats is that recovery is usually speedy – no more than a few days — and without complications. The best way to prevent abscesses? “Don’t allow your cat to fight with other cats,” stresses Dr. Stone. “This is most easily accomplished by neutering and keeping your cat indoors, if possible. The other way is to take your cat to the veterinarian immediately if a bite wound is suspected. If antibiotics are administered after a wound, the development of an abscess may be prevented.” — Catnip staff