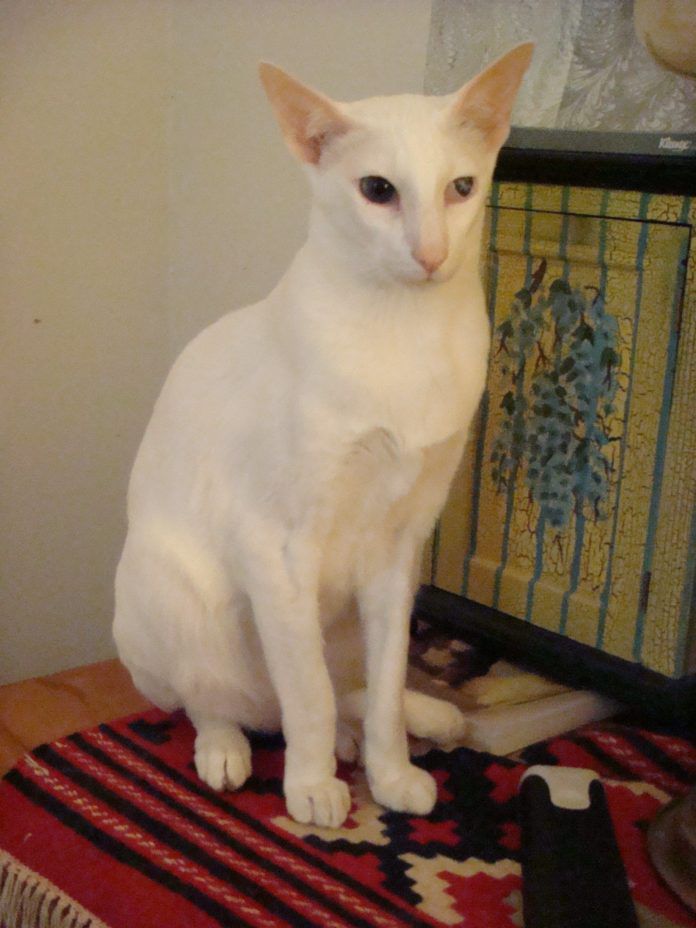 Kittens are rambunctious, delightful little balls of fluff who delight and entertain their owners for hours on end with their silly antics and mischievous behavior. But there is something very special about living with cats as they mature. We were extremely blessed to be able to share our lives with our beautiful and loving white Oriental Shorthair, Sir Hubble Pinkerton, for seventeen years.

Shortly after he turned fifteen, Sir Hubble started slowing down. He wasn’t as interested in playing, his appetite declined and we knew that something was greatly amiss. Following an exhaustive veterinary exam, he was diagnosed with chronic pancreatitis and chronic kidney disease. These serious medical conditions required a great deal of intensive veterinary care and support at home. As a result of this rigorous ministration, the bonds between us grew even stronger.

Although there is no “cure” for kidney failure, we administered to him daily subcutaneous fluids and kidney supplements to slow down the process and help him to feel better. We learned how to recognize when he was hurting and when he was feeling lousy, and how and when to give him the necessary medications to alleviate his pain. When his appetite tanked, we had appetite stimulants on hand and learned many tricks on how to entice him into eating. We discovered that warming his food in the microwave for a few seconds enhanced its aroma, and putting a dab of his favorite entrees on the roof of his mouth via finger-feeding often cajoled him into eating.

To ensure that anorectic cats get nutrition, some folks recommend syringe feeding. However, we discovered that this method can sometimes cause food aversion since the cats can associate foods that are fed by syringe with feeling lousy. We had much better results using anti-nausea medication and an appropriate appetite stimulant.

Taking on the care of an elderly, chronically-ill cat takes commitment, devotion and persistence on the part of their owners. By giving Sir Hubble the profound care he needed, we were able to extend his life for two more wonderful years, and the relationship that developed between us was extraordinary. The month following his seventeenth birthday, he was gently put to sleep, surrounded by people that loved him so deeply. He taught us a lot about unconditional love.