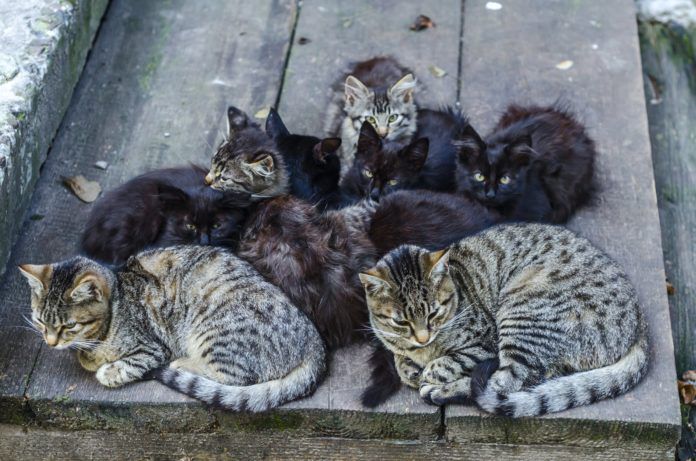 They’re in alleyways, restaurant dumpsters and campgrounds. Sometimes, they even end up living in your backyard. They’re usually skinny, suspicious and scared. These are feral cats, reverted to their wild state, trying to survive in an often unwelcoming world.

Just how many feral cats are living in the United States? “Nobody knows for sure, but it’s safe to say tens of millions,” explains Donna Wilcox, Vice President of Alley Cat Allies (ACA), which is based in Maryland. In fact, experts believe that there are probably more feral cats than the country’s estimated 64 million pet cats.

Many people assume that cats can survive on their own. But countless feral cats die from starvation, abuse, disease, car accidents and extermination programs. Groups like ACA promote the human control of feral cat populations via trap, neuter and return (TNR) programs.

What you should do

“If you see a cat in your neighborhood, you should first try to find out if he’s a neighbor’s pet or a feral cat,” recommends Wilcox. “Leave food out, and see if he comes over to eat while you’re around, or if he will allow you to pet him. If so, the cat is probably either a former or current pet. Fasten a paper collar with your name and phone number around his neck (like the ones that veterinarians use for hospitalized cats), asking the owner to call you. If no one calls, and the cat returns, you should put up “lost cat” posters in the paper and around the neighborhood. If there’s still no response, the best thing to do is to neuter the cat (if it hasn’t been done so already) and try to find him a good home.”

If it’s possible for you to take him into your home in the meantime, that would obviously be the best short-term solution — but be sure to isolate him from other pets in the household until you know he has a clean bill of health.

And if it’s a cat you cannot approach, you will need to resort to humane trapping. “Animal shelters often lend out live traps, “explains Wilcox. “Traps made by Tomahawk and ACES tend to work best.” Cover the trap with a towel, and bait it with something fragrant — like fish flavored canned cat food — to tempt the cat to enter.

However, try not to trap in inclement weather or leave the trap unattended for too long. A cat can become cold, stressed or injured if left outside in a trap. If you place the trap where you’ve been feeding him, you can often trap him right away.

Kittens from four to 12 weeks can be caught with smaller traps. “The younger they are, the easier to trap, tame and adopt out,” explains Wilcox. “A trapped socialized cat — like a former pet cat — will likely be comforted by the sound of your voice. He can be re-socialized and adopted out. But a terrified cat is most likely feral. In either case, take the cat to a sympathetic veterinarian immediately,” stresses Wilcox.

Until then, you should keep the trapped cat in a quiet and safe indoor place — your garage, basement or bathroom will suffice. The veterinarian can anesthetize the cat inside the trap if necessary to be able to safely examine him. He will vaccinate the cat, eartip for future identification, neuter using dissolvable sutures, and return the animal to the trap for at least 24 hours of monitoring.

When the cat is sufficiently awake, food and water can be slipped through the trap’s back door. “When the cat has recovered, you should release him where you caught him,” says Wilcox. There, a feral cat caretaker can hopefully be present to provide the colony with ongoing food, water and shelter.

According to Wilcox, the various TNR programs have helped to stabilize feral cat populations in many communities. Caring individuals and groups often pay for TNR programs themselves, so consider donating or volunteering for this worthwhile cause in your own community.

What exactly is the “R” in TNR? “We return feral cats because they are largely unadoptable,” explains Wilcox. “The taming process takes months of patience, and even then, cats may remain very shy.” That said, there are exceptions to the rule and there are plenty of lucky feral cats that were able to adjust to the life of pampered indoor pet. — Catnip Staff