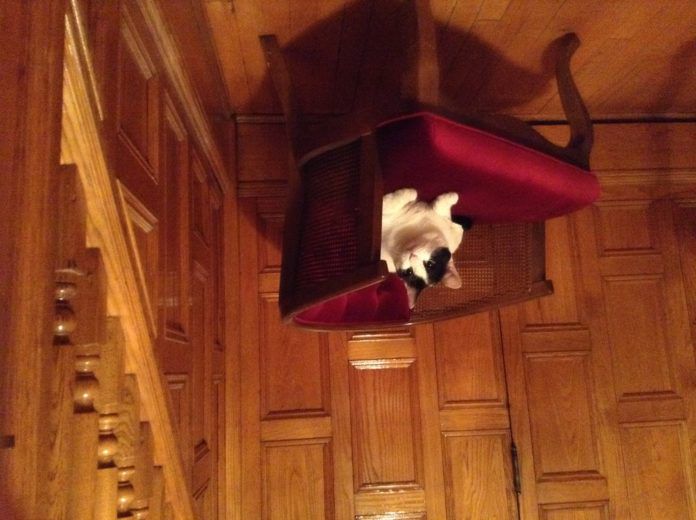 Like most of us, I have a serious love for kittens. I’ve resisted the idea of adopting one because I know that two would be better — and easier, in some ways — but I strongly resist becoming a four-cat household at present.

And up until recently, it’s just been Puja and Rocky as the middle-aged resident felines. But now, Tony has been added to the mix.

About six weeks ago, my mother was telling me about the situation of one of her friends — a kind, generous woman named Hilda who opens her two-bedroom apartment in Queens, New York to the needy animals that seem to find her. When she found Tony wandering around outside an abandoned house in the midst of a very difficult winter, she started to feed him. After several days, it was clear that he was looking for someone who was never going to return. And that didn’t sit well with Hilda.

So she added him to the mix of her nine cats and one dog (after taking him to the vet for a health check, vaccinations and a neuter surgery). It’s estimated that Tony is about two years old, a white-and-black domestic short-haired cat with a cheerful, easy-to-please personality.

But Hilda’s cats took an instant dislike to him. So much so that she had to sequester him in a dog crate in another room to protect him from their incessant bullying, allowing him a few hours of freedom with her when she came home from her job at night.

This plight upset my mother greatly, and she commented several times that she wished she could adopt Tony herself. But she and my elderly stepfather travel a lot, and a pet would add a responsibility to their lifestyle that would be difficult.

So that is where the dutiful daughter came in. If I can do something to help an animal in need — and make my mother happy at the same time — to me, that’s a win-win!

Tony has been here just a short time now, and it would be inaccurate to say that Puja and Rocky entirely agree with my decision. But things are getting better day by day, and I am glad that I followed the advice of our very own Dr. Nick Dodman regarding safe (and slow) feline introductions. Stay tuned for the next installment!