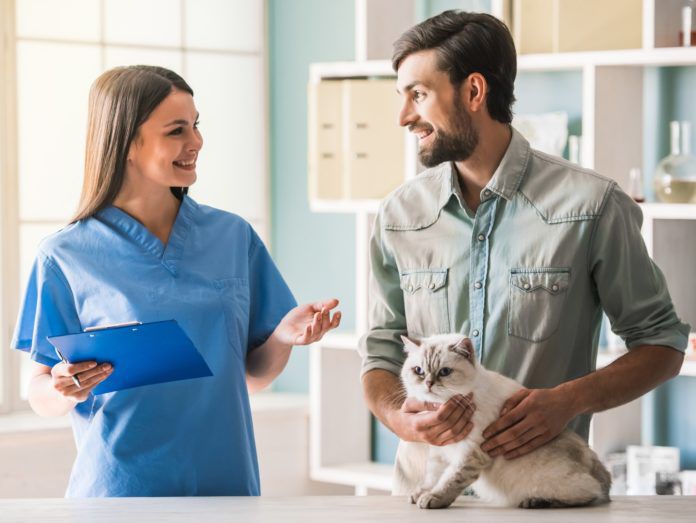 You sit anxiously in the waiting room while your cat undergoes surgery to remove a cancerous mass. Finally, after what seems like forever, the doctor comes out in his scrubs and tells you he was able to excise the malignant tumor and that he believes he got it all. Relieved but not yet ‘out of the woods,’ you wait for the pathology report.

Sure enough, it confirms the surgeon’s belief that he excised the cancer in its entirety. There are clean margins. Why, then, does the tumor grown back in the exact same spot some months later?

According to soft tissue veterinary surgeon John Berg, DVM, who operates on cancerous tumors almost daily and serves as editor-in-chief of Catnip, “Pathology reports in general are written in very precise medical language, then signed by someone with a lot of advanced training. And they have an air of authority about them. But they can be wrong. That’s especially true with an assessment on whether the margins are clean after an operation to excise a cancer.”

To learn more about the meaning of ‘clean margins’ and why things are not always what they seem, we sat down with Dr. Berg for some clarification.

Catnip: People hear the term ‘clean margins’ all the time. And they take it to mean that the cancer is fully excised and will not grow back; no cancerous cells are lingering that could multiply into a new tumor. How can it be that a cat can be said by a pathology report to have clean margins and then get a recurrence of the tumor?

Dr. Berg: Let’s say we remove a tumor the size of a lemon, which is not at all an uncommon size in cats. As we always do, we attempt to remove it with a cuff, or margin, of normal tissue all the way around it rather than just shelling it out around its edge. That helps insure that we got the mass in its entirety, with no stray cancer cells or clumps of malignancy left at the spot. Then we send the tumor to the pathologist for a report.

But the pathologist does not look at the entire ‘lemon.’ His lab makes a few microscopic slides from three to five spots. Each is roughly the size of a postage stamp. So if the report comes back that the tumor has clean margins, it means only that those few spots have clean margins. For most of the tumor, say, 90 percent, we really don’t know.

Catnip: Why do they only look at a few small sections? Why can’t they check the mass all the way around?

Dr. Berg: There’s no technology for turning the tumor every which way in some device and looking at every bit of it. You have to cut it into very thin slices — so thin that light can pass through in order for you to be able to see the individual cells upon staining — and look at the cells under a microscope. That’s the only way you can see whether there are any cancer cells along with the cuff of normal ones. If there are, the margin is not clean and the chances are high that the surgeon left cancerous cells behind.

Catnip: Why don’t they take more slices to get a better idea?

Dr. Berg: To get at the entire surface of the tumor, or even much of it, you’d have to have literally thousands of slices. Each postage-stamp size slice goes from the surface of the lemon into the tumor, not along its outer edges. That makes it cost-prohibitive, not to mention time-prohibitive. So what you get in the end is an impression about whether the tumor excision was complete, not a definite answer.

Catnip: Okay, but then why can’t the surgeon tell when he’s doing the surgery? Doesn’t a cancerous mass look different from normal tissue? Can’t he just see by looking at it?

Dr. Berg: To a certain degree, he can. ‘This looks like normal tissue; this looks cancerous.’ But you can’t eyeball it completely. For instance, sometimes the tissue at the junction of the cancer and the normal cells doesn’t look quite right — the normal cells are ‘irritated’ by the cancerous ones and take on a different appearance. That’s in part why you need to get down to the microscopic level. The naked eye just isn’t dependable enough. And even under the microscope, there are potential problems.

Dr. Berg: Inside the body, the orientation of the tissue planes to each other pretty much stays put. But once you remove a mass, tissue can slide around. Think of a parfait with a layer of yogurt, a layer of fruit and a layer of granola. Some of the granola can get into the fruit, and some of the fruit can migrate into the yogurt. That’s how it is with tissue once outside the body. Tissue planes can slide, causing cancerous cells to move over to where the normal cells are, and vice versa. So a pathologist can potentially get a false reading of a clean margin or, conversely, a false read of an incomplete margin.

Catnip: How often do pathologists get it wrong?

Dr. Berg: Several studies have suggested that when margins are pronounced incomplete, or not clean, for certain very common cancers of dogs, the recurrence rate of the tumor is only about 30 percent. It’s reasonable to assume the same is true for cats since they suffer some of those same cancers. So that indicates that about 70 percent of the time, when margins are not considered good enough, they are — at least for certain cancers, specifically, soft tissue sarcomas that grow on the surface of a cat’s body.

On the flip side, research has indicated that about 15 percent of instances in which the margins are deemed clean, the malignancy grows back. The bottom line is that reports of both complete and incomplete margins can ultimately be incorrect; it’s hard to make predictions about cancer recurrence down the line based entirely on an assessment of margins.

Part of the problem is that we don’t really know how thick the cuff of normal tissue excised along with the tumor needs to be. It probably varies tumor to tumor.

Catnip: What do you mean?

Dr. Berg: A pathologist might see a clean margin, but maybe it’s only a few millimeters thick. That’s very thin. Maybe it means that if you sliced off a piece right near that spot and looked at that, you would see some cancer cells at the margin that would allow the tumor to grow back.

Catnip: Can’t a surgeon make a wider cuff than that, just to be safe?

Dr. Berg: We usually try for a cuff of two centimeters — about an inch. But that’s not a researched number. It just ‘seems’ right. Also, depending on where the tumor is, you might not be able to get two centimeters.

Dr. Berg: What if the tumor is right next to the heart? In that case, you may not even be able to get one millimeter. You can’t necessarily cut away a piece of the heart to extract a cancer.

An adequate margin is determined not only by what organs the tumor is near, but also what kind of body tissue is in the vicinity. If a tumor runs along what we call a fascial plane — a strong coating of connective tissue like the kind that makes up tendons and ligaments and which are normally found along leg muscles or the body wall — you may need only a very small margin, or cuff. That’s because it’s not easy for a cancerous tumor to break through a fascial plane.

On the other hand, a cancer next to subcutaneous fat may very well need more than a margin of two centimeters. Subcutaneous fat makes a poor barrier to tumor growth. The good news here is that you can remove a lot of subcutaneous fat without harm to the cat, so it’s easy to make a wide margin when a cancerous mass is located in such an area.

Catnip: What does this mean for a cat owner? Should we just ignore reports of clean margins and incomplete margins since even the measure of what a clean margin should be is something of a moving target?

Dr. Berg: No, I wouldn’t ignore it. It’s just not the last word. It’s part of a constellation of factors that can help cat owners determine next steps after surgery to remove a cancer. You also want to consider how the surgeon thinks the operation went. Even though a surgeon can’t see everything with the naked eye, he gets a sense. In my own case, if the pathologist says the margins are clean but I felt I couldn’t get everything, I’ll tell the owner that. It can happen the other way, too. The margins will be declared incomplete in the pathology report, but I’ll feel pretty sure they were complete. That can influence’s an owner’s decision on whether or not to opt for radiation therapy — targeted therapy over the area to kill any cancer cells that might have been left behind.

Catnip: What else does the owner need to consider besides the pathology report and the surgeon’s assessment?

Dr. Berg: You want to think about whether another surgery could be performed successfully if the tumor did grow back. One problem with second surgeries for cancer is that they almost always must be “bigger” — meaning a larger incision —than the original surgery. If surgery for a regrowth would place a critical organ such as a kidney at risk, you might opt for radiation to minimize that risk if the margin is declared incomplete. But if the tumor were to grow back, say, on a cat’s flank, where there’s nothing critical going on anatomically, you might skip the radiation even with a report that the margins are not clean.

The age of the cat counts, too —how much you’re willing to put the pet through given his age and overall health status. And of course, cost counts. For some people, further treatment is simply out of the question no matter what the odds might be from the pathologist’s or the surgeon’s point of view.

The point is that there are a number of things that go into it, including the owner’s attitude as well as a built-in level of uncertainty. — Larry Lindner