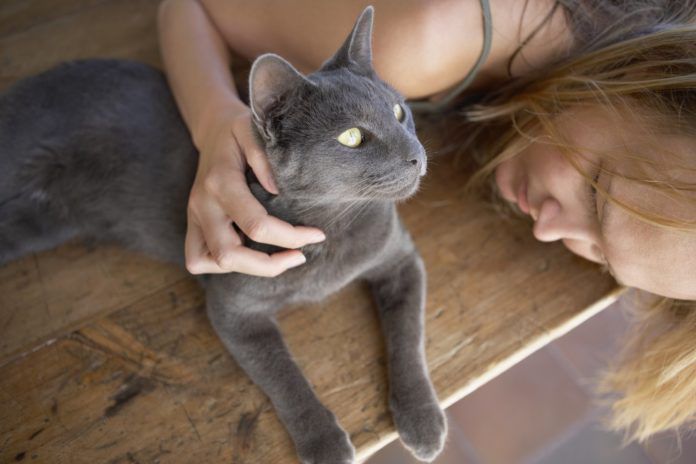 As lymph flows through the lymphatic vessels, it passes through at least one set of lymph nodes — and often several sets — before ultimately emptying into the general circulation where it mixes with blood. The lymph nodes are the major sites in the lymphatic system where the immune cells gather.

The immune system’s job is to protect and defend the body against harm by mounting an attack against invading substances (antigens). When an antigen invades the body and makes its way to the lymphatic system and eventually to the lymph node, it stimulates a discrete population of lymphocytes in the node. This causes those lymphocytes to proliferate and transform (or become activated). As noted above, activated lymphocytes may produce antibodies that neutralize the antigen, or the lymphocytes may become involved in more complex “cellular” immune responses.

Lymphadenopathy is sometimes discovered during a routine examination of the cat. Occasionally, a cat owner will bring a cat to the veterinarian because of clinical signs related to the lymph node enlargement — for example, difficulty swallowing due to enlarged retropharyngeal lymph nodes, which are located at the back of the throat. (See sidebar on page 8.)

Sometimes an owner will bring a cat to the veterinarian because they’ve detected a lump — which turns out to be an enlarged lymph node — while patting or stroking the cat.

Why age is important

The age of the cat is important when considering the significance of lymph node enlargement. Kittens and young cats are exposed to a variety of antigens early in their lives, and an increase in lymph node size is an expected response by the immune system. As cats mature, lymph node size usually decreases and the nodes often become more difficult to palpate in older animals. However, in geriatric cats or cats that have lost weight due to illness, the loss of body fat around the lymph nodes may make the lymph nodes appear more prominent than expected.

Unfortunately, cancer is a common reason for lymph node enlargement. The size and texture of the lymph node may give clues in this regard. Enlarged, firm, painless lymph nodes that are freely moveable are usually associated with primary lymph node cancer, i.e. lymphoma. Very hard lymph nodes are more suggestive of metastatic cancer, i.e. a cancer arising in another site in the body that has spread to that lymph node.

The degree of enlargement may offer some clues as to the cause. Marked lymphadenopathy (when the lymph node is five to 10 times the normal size) most often occurs with a lymph node abscess (a severe bacterial infection) or with lymphoma; metastatic cancer rarely causes lymph node enlargement of this magnitude.

The location of the lymph node enlargement should also be considered in the patient’s evaluation. If one lymph node is enlarged — or one regional group of lymph nodes is enlarged — the vet will carefully evaluate that area of the body for evidence of inflammation, infection or cancer. For example, if the right submandibular lymph node (the node just below the jaw) is enlarged, the right side of the mouth will be examined carefully. A tooth root abscess involving a tooth on the right side, for example, could cause this nearby lymph node to be enlarged. However, if all of the lymph nodes involving the head region are enlarged, a more diffuse illness involving the head — such as an upper respiratory infection — would be something to consider.

Obtaining a diagnosis in cases of lymph node enlargement may require a variety of tests, including blood and urine analysis, X-rays and ultrasound. Ultimately, a definitive diagnosis often requires obtaining a sample of cells from the node itself. This is usually achieved either by aspiration cytology, or by surgical biopsy.

Aspiration cytology is a procedure in which a needle — attached to a syringe — is inserted into the lymph node. Suction is applied to the syringe so that cells from the lymph node are aspirated or sucked into the hub of the needle. The contents are then sprayed onto a microscope slide and are sent to the laboratory for interpretation. The advantage of this procedure is that it is fairly non-invasive and inexpensive. A disadvantage is that the aspirate may not yield enough cells to make a diagnosis. Only positive findings are diagnostically useful. Unfortunately, the absence of abnormal findings in an enlarged lymph node means that the diagnosis is still unresolved.

Biopsy of the lymph node is the definitive diagnostic test in evaluating lymph node enlargement. Depending on the size and location of the node, either the entire node is removed (this is called “excisional biopsy”), or a small piece of the lymph node is removed (this is “incisional biopsy”). The biopsy specimen is then evaluated by a pathologist. Treatment is based on the biopsy results: infections are usually treated with antimicrobials; cancer is treated by chemotherapy, surgery, radiation, or a combination of these. Lymph node cancers can often be treated effectively, and infections typically respond well to antibiotics. In either case, the most important thing for you as the owner to do is to check your cat thoroughly for abnormal swellings every couple of months or so, particularly as she gets older, and see your veterinary if you find anything suspicious. —Arnold Plotnick, DVM, DACVIN