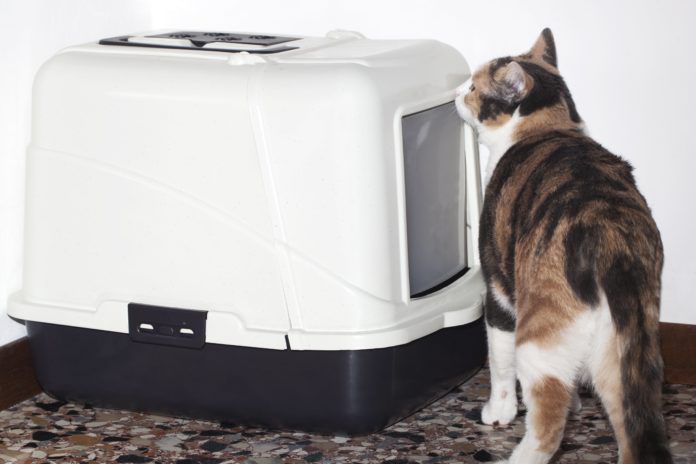 Constipation is one of the more common health problems that can affect your cat’s digestive system. This frustrating condition not only causes the cat varying degrees of discomfort, but it can also adversely affect his appetite and can even cause vomiting (more on that later).

According to Michael Stone, DVM, a small animal specialist at Tufts University College of Veterinary Medicine: “Most cats defecate once daily. Some cats will defecate twice a day. It wouldn’t be too unusual to skip a day, but I would be concerned if there has been no stool production after two days. When owners notice that their cat is producing infrequent or difficult evacuation of dry, hard feces, these are red flags to which owners must pay attention.”

When constipation is chronic

If an owner observes his cat displaying these symptoms, a veterinary evaluation should be performed as quickly as possible.

Since there are many reasons for cats to become constipated, we asked Dr. Stone to share more information about the causes of this condition. “Cats that don’t drink enough water can develop hard, dry feces that are difficult to pass. This is most common in older cats with concurrent illness, such as kidney disease. Some cats may have progressive loss of function of their colon; we believe the nerve fibers degenerate over time. These patients are especially prone to obstipation and must be carefully monitored.”

When it leads to megacolon

Obstipation in cats may lead to an even more serious condition called megacolon (meaning large colon). “Idiopathic megacolon is a term used to describe severe colonic dilation due to impaired colonic motility,” says Dr. Stone. “Some cases can be managed with diet, stool softeners and pro-motility agents. However, in some cases, surgical removal of the colon (colectomy or sub-total colectomy) are the only effective treatments. Surprisingly, most cats do very well after surgical removal of their colon. Diarrhea occurs for the first few weeks after surgery but over time, most cats return to normal stool habits. Surgery can be lifesaving!”

We were especially curious about why some constipated cats may vomit when attempting to defecate. Dr. Stone explains, “When very young, most animals defecate soon after eating. The gastrocolic reflex is a physiologic increase of colonic motility in response to stretch of the stomach. Although not completely understood, some believe that colonic stimulation (as occurs in constipation) may cause vomiting by reverse stimulation of the gastrocolic reflex.”

How diet can help

Since careful management of chronic feline constipation is crucial, we asked Dr. Stone for his suggestions concerning diets that he has found to be most effective and what type of medications are commonly prescribed for chronically constipated cats. “Some cats respond well to an increase of fiber in their diet; others respond better to a low residue diet. One diet, Royal Canin Gastrointestinal Fiber Response (available by veterinary prescription only), has been described by some as a ‘miracle’ for constipated cats,” says Dr. Stone.

“As far as the most popular medications prescribed to help alleviate constipation, two commonly used medications are Miralax and lactulose if dietary change alone is not sufficient. “

In view of the fact that dehydration is one of the major causes of feline constipation, we asked Dr. Stone for suggestions that might entice cats to increase their daily fluid intake. “A change to a canned diet will increase the amount of water consumed,” says Dr. Stone. Access to bowls of fresh water (and clean drinking bowls) around the home is a good idea, too. — Jo Singer