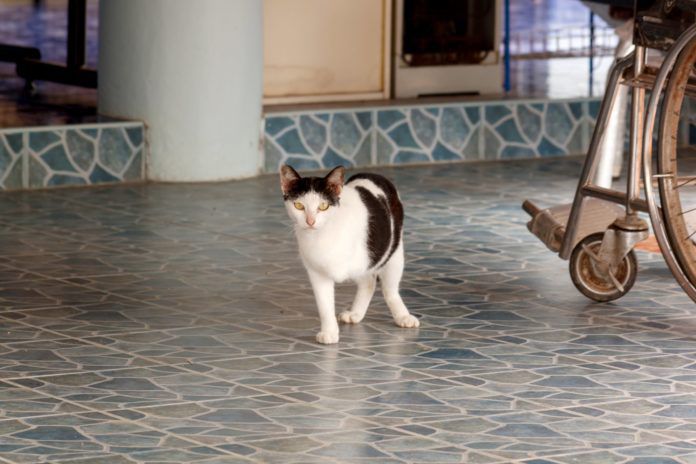 Consider this frightening occurrence: A cat darts into the street near his owner’s home and is struck by an oncoming car. One or more of the bones in one leg are severely broken, and a quick trip to the nearest veterinary clinic yields some very upsetting news. The fractured limb is beyond surgical repair, and the cat’s owners are faced with a limited set of options as explained by the veterinarian: Either the injured cat should be euthanized, or the fractured limb should be amputated.

After some understandably agonizing deliberation, the owners choose the latter — and they’re glad they did. Within a few weeks following the procedure, they are overjoyed to see their cat fully recovered and behaving pretty much the way he did before the accident — not quite so agile, perhaps, but getting along perfectly well in most respects.

Cats usually recover well
This cat’s experience — a speedy return to active behavior following a limb amputation — is not unusual, says John Berg, DVM, a professor of small animal surgery at Tufts and editor-in-chief of Catnip. Cats who undergo such an operation, he says, “tend to do extremely well on three legs. In terms of his ability to walk, climb and run around, a cat that has undergone an amputation will typically be able to do virtually all of the things he was able to do before the surgery. In fact, a casual observer might not even notice that the cat is missing a limb.”

Feline limb amputations are most frequently performed — or are at least identified as the only viable treatment option — in one of two situations, Dr. Berg points out. Either a limb is injured beyond repair when a cat is struck by a motor vehicle or is attacked by another animal — a dog or coyote, for example. Or else there is cancer, such as fibrosarcoma or osteosarcoma, in the bones or soft tissues in a cat’s leg. In many such cases, amputation is the only way to completely remove the tumor, so that it cannot grow back. “In cats,” says Dr. Berg, “there’s a very good chance that such a cancer will be cured by amputation.”

To begin the operation — which, says Dr. Berg, will typically take 45 minutes to an hour and is the same whether a front leg or back leg is involved — an incision is made at the point where the limb joins the body, the large blood vessels are tied off to eliminate the possibility of excessive bleeding, and the entire limb is surgically excised.

“Regardless of whether we’re dealing with a front limb or a hind limb or where in the limb the problem is,” he points out, “we don’t leave any stump because a stump is just useless and unnecessary dead weight and it looks ugly. Prostheses aren’t available for cats, and are truly unnecessary.”

Post-operative care
Following the procedure, the patient will be given intravenous pain medication for two to three days — most commonly fentanyl or buprenorphine. “The cat can typically go home in two days,” says Dr. Berg, “and will be on oral pain medication for about a week.”

For the first two weeks, the cat must be observed for any signs of infection in the incision. “Cats will usually leave front-leg incisions alone,” says Dr. Berg, “but they might have a tendency to chew at hind-leg incisions simply because they’re easier to get at. If really necessary, the owner can use an Elizabethan collar to prevent the cat from doing that.” The sutures will be removed by the veterinarian within about two weeks.

Subsequently, he notes, there is nothing that the owner has to do to facilitate the patient’s recovery. “When the cat gets home,” says Dr. Berg, “he will be able to walk around the house, use his litter box, and do everything else that he has always done. No special ramps … nothing to help him get into his litter box … he’ll do just fine! And cats don’t get depressed. They realize very quickly that they can get around very well on three legs. We never hesitate to do an amputation on a cat out of concern that he won’t be able to ambulate.”

On the other hand, adds Dr. Berg, “We might be less inclined to do an amputation on a geriatric cat or on a cat that has a serious health problem such as chronic kidney or heart disease.”

Life indoors is safest
Dr. Berg recommends that a cat who has undergone a limb amputation should be permanently kept indoors. “Cats who are outdoors tend to defend themselves by running up a tree,” he notes. “So a cat who is missing a leg will be less able to escape from another cat, a dog, or other predators with four legs. To keep the cat safe, I would keep him indoors.”

Keep in mind that some owners might be reluctant or unable to authorize an amputation due to the cost involved. “At Tufts, the total bill for a feline amputation will typically be in the neighborhood of $2,500,” explains Dr. Berg. “However, at some primary care practices, it could be a little less. In general — depending on a variety of factors — the cost of the procedure is likely to range between $1,200 and $3,000.”

For many owners, however, the benefits are well worth the cost of such a procedure. “For most of the conditions for which we’d recommend limb amputation,” says Dr. Berg, “the procedure is going to permanently solve the problem.” — Tom Ewing