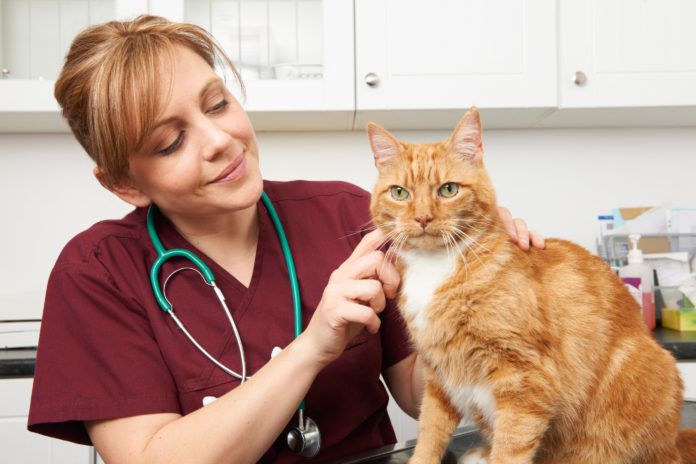 As a cat reaches the age of eight or nine — the feline equivalent of age 40 or 50 in a human being — he is likely to begin experiencing signs of one or more age-related physical disorders. If unnoticed or untreated, such disorders are likely to intensify over time and may eventually prove lethal.

Hypertension (abnormally high blood pressure) is one of these disorders. Without treatment, it can potentially lead to blindness and even fatal damage to the heart, kidneys and brain. Fortunately, if diagnosed at an early stage and treated appropriately, hypertension can be a manageable feline disease condition.

Primary hypertension
In rare cases, a cat’s elevated blood pressure has no discernible cause. This is known as primary — or essential — hypertension, according to Arnold Plotnick, DVM, the owner of Manhattan Cat Specialists, a feline-exclusive veterinary hospital in New York City. “It just happens, and we don’t know why,” he says.

On the other hand, veterinarians frequently diagnose secondary hypertension, which is a consequence or byproduct of a separate physical disorder. Occasionally, for example, the condition can stem from the presence of a heart disorder or a tumor that is producing excessive amounts of certain hormones, such as epinephrine.

It’s also possible for some medications to raise a cat’s blood pressure. Although fear, anxiety or sudden physical trauma may cause a spike in an animal’s blood pressure, random occurrences such as these have not been linked to chronic feline hypertension.

In the great majority of cases, Dr. Plotnick points out, feline hypertension is a consequence of either chronic kidney disease (CKD) or hyperthyroidism. And of those two conditions, kidney disease is seen significantly more often. (See related article on earlier diagnosis of CKD in Catnip, August 2016.)

Complex factors converge
Several complex factors can result in the development of kidney-related feline hypertension. For example, the kidneys are responsible for maintaining the proper amounts of fluid and salt in the body. They also produce hormones that help regulate blood pressure. But diseased kidneys often produce abnormal amounts of these hormones, or they inappropriately retain salt and water.

The resulting fluid retention leads to congestion in the circulatory system and, in turn, a buildup of pressure in the arteries. This is especially problematic, he notes, in older cats.

In hyperthyroidism, there is an overproduction of thyroid hormone and a resulting elevation of an animal’s metabolic rate. Due to this acceleration, the heart beats faster and more forcefully. This phenomenon — referred to as “excessive cardiac performance” — results in increased pumping pressure, greater output of blood into the arteries and sometimes a corresponding rise in blood pressure. An estimated 25 percent of cats with hyperthyroidism have high blood pressure.

In addition to chronic kidney disease and thyroid gland hyperactivity, says Dr. Plotnick, feline hypertension can be caused by cancer of the adrenal gland. “An adrenal tumor secretes a hormone called aldosterone,” he notes, “which causes a rise in circulating sodium. And this will result in elevated blood pressure.”

Cats with either advanced primary or secondary hypertension will exhibit problems associated with the systems that are typically affected by the condition: the ocular system (sudden blindness or retinal hemorrhaging); the renal system (poor appetite, weight loss, increased drinking and urination); the neurologic system (seizures, disorientation); and the cardiovascular system (fluid retention, difficulty in breathing).

The clinical signs of systemic hypertension are often vague and nonspecific, except for the ocular and neurologic problems that may suggest high blood pressure. General malaise and poor appetite, for example, are signs of various conditions. In order to arrive at a diagnosis, it is essential that an animal’s blood pressure be measured in an appropriately equipped veterinary facility. In extremely rare cases, says Dr. Plotnick, the blood pressure will be measured by placing a catheter directly into a cat’s artery. In almost all cases, however, either of two less invasive methods will be employed: the Doppler technique or the oscillometric technique.

Doppler technique: This technique involves placing a small ultrasound probe over one of the large arteries, usually in a cat’s tail. An amplifier connected to the probe produces audible sounds for every pulse beat. A blood pressure cuff is placed just above the probe and is inflated until the pulse sounds can no longer be heard. The cuff is then slowly deflated, and the pressure at which the sound of the pulse can be heard consistently is the systolic arterial blood pressure.

Oscillometric technique: This method utilizes a cuff containing a small sensor that detects small oscillations in an artery with each pulse.

For humans, these two values are written one over the other, separated by a slash mark. (Normal human blood pressure is 120/80 mm Hg, which stands for millimeters of mercury). For cats, says Dr. Plotnick, a normal reading would be 160/100.

Anything above either of those numbers would be considered high blood pressure. If a cat is diagnosed with hypertension using one of these techniques, other tests will be done to identify the cause — complete bloodwork, for example.

How its treated
Primary treatment for feline hypertension, according to Dr. Plotnick, currently centers on classes of drugs including calcium channel blockers and angiotensin-converting enzyme (ACE) inhibitors, both of which work to reduce blood pressure by relaxing and dilating an animal’s blood vessels. “My drug of choice for treatment in cats is amlodipine, a calcium channel blocker that is given once a day,” says Dr. Plotnick. “It is very effective in cats.”

At the same time, Dr. Plotnick points out that amlodipine or other prescribed medications must be given consistently throughout an affected cat’s lifetime, although dosage may be altered depending on fluctuations in the patient’s blood pressure. He advises that an affected cat’s blood pressure should be measured every three months or so, and the medication dosage be adjusted accordingly. — Tom Ewing