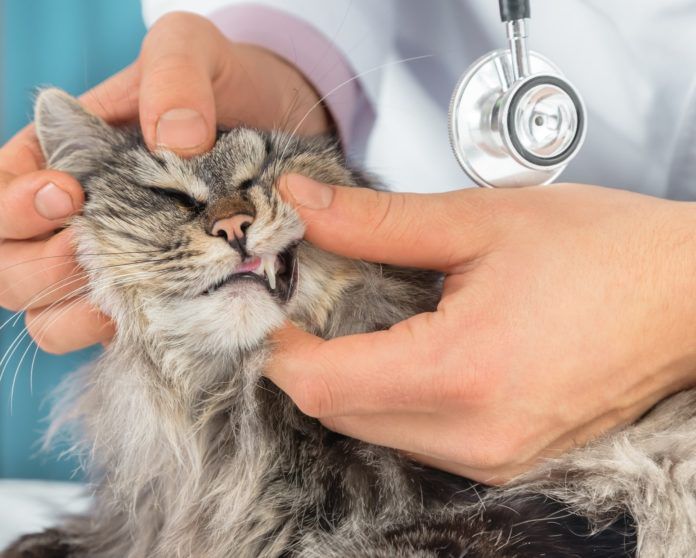 Like every veterinarian, I evaluate the mouth and gums of my patient whenever I’m performing a physical examination. I expect to find nice pink gums, and most of the time, I do. Occasionally, however, I’ll note with dismay that the gums are pale, or even white. This finding immediately sets off alarm bells in my head: This cat is anemic. The task of making a diagnosis now begins.

Anemia is a decreased amount of red blood cells. It is a laboratory finding — not a diagnosis. By approaching an anemic cat in a systematic fashion, a definitive diagnosis can be achieved in most cases. Firstly, attention should be paid to the breed and age of the cat. Although cats have fewer breed-related red blood cell disorders in comparison to dogs, some Abyssinians and Somalis have been reported to have excessively fragile red blood cells, making them prone to anemia.

Young cats — with their small blood volume — are more susceptible to blood-sucking internal parasites like hookworms, or external parasites, like fleas. Middle-aged cats are most likely to develop immune-mediated anemia, while older cats have a higher likelihood of developing kidney disease or cancer, two common causes of anemia.

Findings during a physical examination can provide valuable information regarding potential causes for the anemia. The presence of a fever may indicate an infection or inflammation. Muffled heart or lung sounds may suggest bleeding into the pericardium (the membranous sac around the heart) or the chest cavity. An enlarged spleen felt during physical exam might indicate a splenic tumor. One particular splenic tumor — a hemangiosarcoma — frequently bleeds into the abdomen.

The most important test to run when assessing an anemic cat is the complete blood count (CBC). This test measures several important parameters, and provides both diagnostic and prognostic information. First and foremost, the CBC measures the hematocrit, an assessment of the severity of the anemia.

Other important parameters on the CBC are the MCV (mean cell volume) and MCHC (mean cell hemoglobin concentration). The MCV is a measure of how large or small the red blood cells are, while the MCHC assesses the amount of hemoglobin in the red cells. Evaluation of MCV and MCHC can give strong hints as to the possible cause of the anemia.

The first step in trying to elucidate the cause of a cat’s anemia is to determine whether the anemia is “regenerative” or “non-regenerative.” A regenerative anemia is one in which the bone marrow responds to the anemia by releasing immature red blood cells, called reticulocytes, into the bloodstream. These reticulocytes aren’t fully mature, but they can still carry oxygen.

Basically, there are two main causes for regenerative anemia: blood loss and hemolysis. Most causes of blood loss can be identified relatively easily. Cats with a history of trauma (for instance, hit by a car or falling from a height) often suffer blood loss as a result of their injury. The bleeding may be internal, for example, from a ruptured spleen, or it may be external. Ultrasound of the abdomen and/or X-rays of the chest may reveal the presence and source of internal bleeding. External bleeding is usually apparent on physical examination.

In some cases, the immune system is attacking the red blood cells for no obvious cause at all. This is termed primary hemolytic anemia. More often, there is a secondary cause for the immune system to attack the red blood cells, such as infection with a virus or a red blood cell parasite, or cancer. Non-immune-mediated hemolytic anemia has a variety of causes, including onion ingestion, snake bite envenomation, severely low blood phosphorus levels and zinc toxicosis (usually caused by swallowing pennies minted after 1983).

Non-regenerative anemia may be due to several causes, the most common being some type of chronic illness. A multitude of inflammatory, infectious and cancerous disorders can lead to anemia, most cases being of mild to moderate severity. Infection with the feline leukemia virus (FeLV) often leads to severe non-regenerative anemia.

Chronic kidney disease is a very common cause of non-regenerative anemia in cats. The kidneys produce a hormone called erythropoietin. This hormone instructs the bone marrow to produce red blood cells. When the kidneys are failing, they often do not produce enough of this hormone, and the bone marrow therefore doesn’t produce enough red blood cells. Anemia from chronic kidney disease can sometimes be quite severe.

Treatment of anemia in cats depends on the cause. Cats with life-threatening anemia may need to be stabilized with a blood transfusion. Like humans, cats have distinct blood types, and it is imperative that the donor and recipient are compatible. If blood loss was determined to be the cause of the anemia, the reason for the blood loss must be addressed and remedied for treatment to be successful.

Cats with immune-mediated hemolytic anemia are typically treated with immunosuppressive medications so that the immune system stops attacking the red blood cells. The most common drug prescribed for this purpose is prednisolone. In stubborn cases, additional drugs may be needed to get the condition under control.

Anemia is a common finding in cats. Because there are so many potential causes for anemia, making a definitive diagnosis can be a challenge. By taking a systematic approach, performing a good physical exam, and properly interpreting the complete blood count and other diagnostic tests, vets can almost always clearly elucidate the cause of the cat’s anemia. Prognosis depends on the cause, as well as the cat’s individual response to treatment. — Arnold Plotnick, DVM, DACVIM