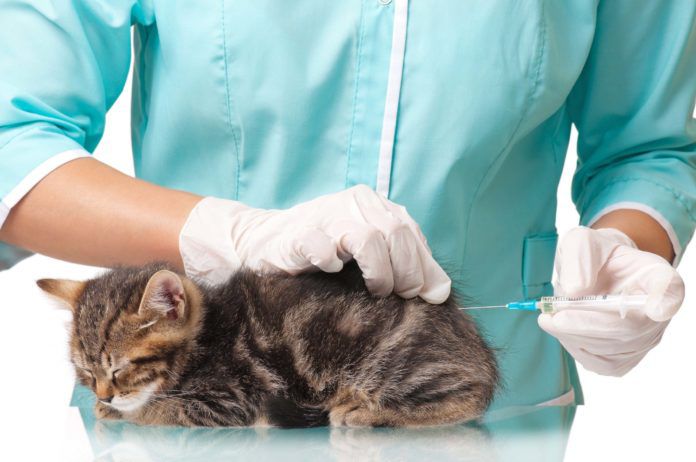 Although vaccines have been an integral part of preventive health care programs for several decades now, many cat owners probably take vaccination for granted. They shouldn’t. No other medical development has been as successful as vaccination in controlling deadly diseases in companion animals.

Today, the decision to vaccinate a cat is made based on the risks and benefits for each individual cat. Vaccination is not a benign medical procedure. Our intention has been to come up with a logical strategy for vaccination that maximizes our ability to prevent dangerous infectious diseases while minimizing the occurrence of any adverse effects of vaccination.

As a teenager volunteering at a busy veterinary practice in my Brooklyn neighborhood, I clearly remember the devastation that the parvovirus outbreak in the late 1970’s brought to the pet dog population. Canine distemper, feline panleukopenia and many other contagious infectious diseases are waiting for the opportunity to re-emerge. To not vaccinate our pets is not an option. The goal of the veterinary community is to vaccinate as many pets as possible — but with the fewest vaccines necessary.

The types of vaccines

Core vaccines are those that protect against panleukopenia, herpesvirus, calicivirus and rabies. The most commonly used vaccine against the first three viruses mentioned above is one that contains all three viral antigens together in the same dose of vaccine. This is known as a “multivalent” vaccine, and is commonly abbreviated as the FVRCP vaccine.

The rabies vaccine is typically a “monovalent” vaccine; it contains viral antigens for only one virus: the rabies virus. There are several non-core vaccines available for cats, and a discussion of all of them is beyond the scope of this article. However, the most important of the non-core vaccines is the feline leukemia virus (FeLV) vaccine.

Feline herpesvirus is a major cause of upper respiratory disease in cats. Herpesvirus infections are very contagious between cats. Most cats become exposed to the herpesvirus at some time in their lives, and the majority of exposed cats become infected. Cats typically develop a mild upper respiratory infection — sneezing, conjunctivitis (“pink eye”), runny eyes, nasal discharge — which often resolves on its own.

In some cats, however, the virus induces severe upper respiratory disease, and a few of these cats may develop persistent upper respiratory symptoms for years. The herpesvirus can also cause a variety of eye disorders, and also cause skin disease in some cats. Age is not a significant factor, but kittens appear to be affected more severely than adults. A presumptive diagnosis is made based on evaluation of the cat’s history and clinical signs.

After a cat recovers from the initial infection, the virus remains in the body as a latent infection. The dormant virus can be reactivated during times of stress, crowding and concurrent illness, resulting in a recurrence of clinical signs. During these recurrences, infected cats shed the virus profusely in their eye, nasal and oral secretions, increasing the risk of infecting other cats. Unfortunately, there are currently no drugs that eliminate herpesvirus from the body.

The danger of calicivirus

The feline calicivirus is an important cause of upper respiratory and oral disease in cats. Respiratory signs caused by calicivirus (sneezing, ocular discharge, nasal discharge) tend to be milder than those caused by the herpesvirus, but calicivirus may cause ulcers on the tongue of cats and kittens. The virus is mainly transmitted by direct cat-to-cat contact, but indirect transmission via contamination of the environment or through contaminated objects is also possible.

Acutely infected cats will shed the virus in oral, ocular and nasal secretions for two to three weeks, although some cats become chronic carriers and will shed the virus persistently for months or even years. Cats of any age are susceptible, although kittens are most susceptible. Cats housed in groups — such as in boarding catteries, shelters and breeding colonies —are at increased risk for contracting calicivirus.

Queens, if infected during pregnancy, may give birth to kittens with a condition called cerebellar hypoplasia, a neurologic disorder that causes severe incoordination. The virus is spread mainly through contact with feces, but the virus is very stable in the environment and can be spread via contaminated food bowls, water bowls, litter boxes and even health care workers. Treatment consists mainly of supportive care — hospitalization, fluid therapy, antibiotics and nutritional support. With aggressive care, some cats survive the infection, but most will succumb to the virus.

Rabies is a viral disease that attacks the neurological system. Although most people tend to think of this as primarily a dog disease, in the past few decades the number of cases of rabies in cats has been much higher than that in dogs. How often the rabies vaccine should be given depends on the vaccine. Some are labeled for annual revaccination. Others are to be given every three years.

Feline leukemia virus infection is one of the most serious infectious diseases of cats. The disease is caused by a virus belonging to a large family of viruses called retroviruses. Retroviruses are able to incorporate their genetic material into the host’s DNA, allowing the virus to survive long-term in the host. Once in the host, the viral DNA can cause several problems, including transformation of normal cells into malignant cancer cells, and/or disruption of normal cellular functions. The virus will often affect a cat’s bone marrow, causing it to cease production of red blood cells. Kittens are particularly susceptible to this virus.

When to vaccinate and how frequently has been a subject of debate in veterinary medicine. For many years, vaccination was recommended annually, but this one-year recommendation was not determined by any scientific studies. We now know that some vaccines may confer immunity for at least three years, and possibly longer. Modern vaccination protocols are designed to reflect the current knowledge regarding a vaccine’s duration of immunity.

The FeLV vaccine is not a core vaccine, but because kittens are more susceptible to FeLV infection than adults — and because the eventual environment into which a kitten will end up can rarely be predicted with certainty — it is recommended that all kittens up to and including one year of age be vaccinated against this virus.

The initial vaccine is given as early as eight weeks of age, with a second dose given three to four weeks later. One year later, a booster vaccine is given. How often to revaccinate isn’t entirely clear, however. Several studies have shown that the immunity conferred by the FeLV vaccine persists for at 12 months. Other studies suggest even longer (at least two years). The Feline Vaccination Advisory Panel recommends revaccination with the FeLV vaccine every two years for cats at low risk of infection (no contact with other cats, or only with cats known to be FeLV negative), and annually for cats at higher risk of infection (potential contact with cats of unknown FeLV status).

Discuss options with your vet

Vaccines against infectious diseases have done much to reduce sickness and death in companion animals, and vaccination is the cornerstone of preventive veterinary medicine. As with any medical procedure or decision, the advantages must be balanced against the risks, and you should discuss with your veterinarian all of the options now available to determine the best vaccine protocol for your cat. — Arnold Plotnick, DVM, DACVIM