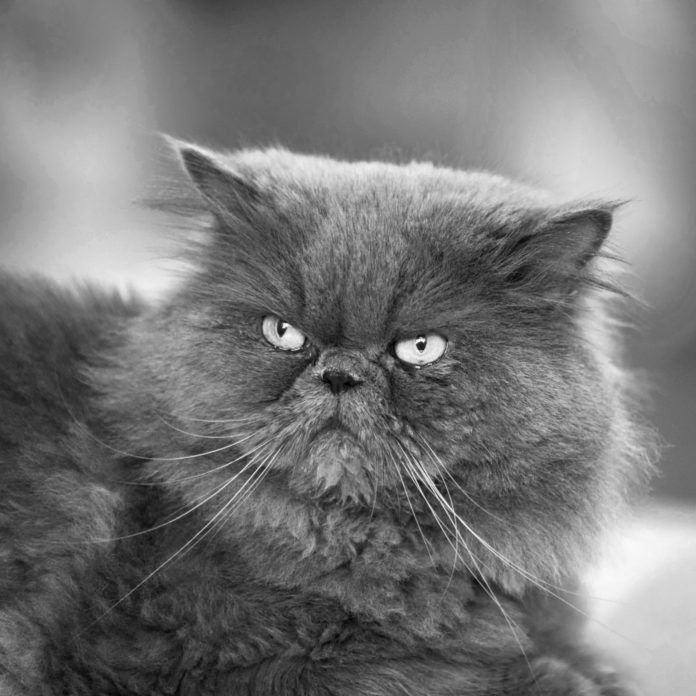 Feline Infectious Peritonitis (FIP) is one of the deadliest viral diseases of cats. It occurs as a result of a cat being infected with feline coronavirus (FCoV). Coronaviruses, in general, can affect many different species. For example, they can cause intestinal and respiratory disease in dogs and pigs, and are a cause of the common cold in humans. In cats, the most common type of coronavirus is the intestinal form of the virus.

Cats become infected when FCoV if the feces of one cat is ingested by another cat. After ingestion, the virus reaches the intestinal tract where it replicates (i.e. reproduces, making many copies of itself). Occasionally, cats infected in this manner will develop a transient, self-limiting diarrhea, although most cats will show no clinical signs at all.

The majority of cats infected with FCoV continue to show no clinical signs of illness from the virus. However, coronaviruses have an important characteristic: They are fairly prone to genetic change, and seemingly harmless coronaviruses can mutate into a variant that may actually be more pathogenic than the original virus.

In fact, this is how clinical cases of FIP are believed to come about: The relatively benign intestinal coronavirus mutates into a new form of coronavirus. This new variant has the ability to leave the intestinal tract and wreak havoc in many different organ systems. Thus, this mutated coronavirus has now become the deadly FIP virus.

Infection with FCoV is common in feline populations everywhere. Approximately 25 to 40 percent of household cats are infected with FCoV. (In breeding catteries and other large colonies, that proportion can rise to 80 to 100 percent.) Despite this high level of exposure to coronavirus, FIP is a relatively uncommon disorder. This is because most infections, as stated above, are with the fairly harmless, non-mutated strain of FCoV — the one that produces only mild diarrhea.

Most cases of FIP occur in young cats, with the peak age being between six months and two years of age. In fact, many cases probably occur right after their first infection. Although youngsters fall victim most commonly, cases are also seen in older cats. According to experts, Persian and Burmese cats are genetically more susceptible to developing FIP than other breeds. “Clinical signs associated with FCoV infection tend to be mild: a little diarrhea, perhaps a little vomiting, for a few days duration, followed by quick recovery,” explains Dr. Michael Stone, DVM, DACVIM, an internist at Tufts University’s Cummings School of Veterinary Medicine.

Two forms of the disease

Once the virus mutates into the deadly FIP virus, a variety of clinical signs may be seen. In general, the disease presents itself in one of two major forms: the effusive (“wet”) form, and the non-effusive (“dry”) form. “The “wet” form is characterized by the development of effusions — collections of fluid — most commonly in the abdominal cavity, and occasionally in the chest cavity. The dry form occurs when clusters of inflammatory cells (called granulomas) accumulate in a variety of organs, according to Dr. Stone.

The most common sites for granulomas are the abdominal organs such as the liver, kidneys, intestines and lymph nodes, as well as the eye and the nervous system. The clinical signs that develop depend on which organ or body system is affected. Effusions are not seen in this form of FIP, hence the name non-effusive, or “dry” FIP. The “wet” form of FIP is more common than “dry” FIP, and probably accounts for 60 to 70 percent of FIP cases.

Fluid most commonly accumulates in the abdomen — often causing dramatic abdominal distension. Less commonly, the fluid will be present in the chest, causing breathing difficulty. Now and then, fluid will be present in both cavities. Occasionally, fluid will accumulate in the pericardial sac (the membrane that surrounds the heart), causing cardiac dysfunction. In many cats with the wet form of the disease, the eyes and the central nervous system will be affected. The liver is commonly affected, sometimes causing jaundice.

Signs can be vague

Clinical signs of the dry form of the disease can be very vague, making diagnosis a real challenge. Persistent fever that doesn’t respond to antibiotics, progressive weight loss and lethargy tend to be the main signs. As the disease progresses and granulomas develop, other clinical signs will develop depending on the organ that is affected and the degree of involvement.

The FIP virus has a predilection for the eyes and central nervous system, and signs of neurologic dysfunction (uncoordinated walking) or eye inflammation are not uncommon.

Unfortunately, the immune system doesn’t seem to be able to defeat this particular virus. The virus does trigger an immune response by the body — but the immune response is ineffective and actually makes things worse. The antibodies produced by the body against the FIP do not neutralize the virus. Instead, they bind to the virus, forming antibody-virus complexes. These complexes circulate in the bloodstream, eventually settling in the walls of the blood vessels where they accumulate, triggering an intense and harmful inflammatory reaction.

These inflammatory lesions can occur in virtually any body system, accounting for the wide range of clinical signs seen in FIP. Normally, when an antibody binds a virus, an immune system cell called a macrophage will ingest the antibody-bound virus and destroy it.

Macrophages, however, don’t destroy the FIP virus, however. Instead, they gobble up the virus and then transport it to other parts of the body, disseminating the disease throughout the body. As a result, cats with FIP tend to succumb to the disease rather quickly, in a few days or weeks. Wet FIP tends to progress faster than dry FIP; the dry form is considered to be less aggressive than the wet form.

“No treatment has been proven effective in curing cats of FIP,” says Dr. Stone. Although there have been sporadic cases of “successful” treatment using immunosuppressive drugs, it is likely that these cases were misdiagnosed. (In fact, no immunosuppressive drug regiment has withstood the test of time.) In 2004, a report was published that described the use of recombinant feline interferon and glucocorticoids for the treatment of the wet form of FIP. Although the initial results looked encouraging, a larger, controlled study proved the treatment to be totally ineffective.

Pentoxyfiline has been used on cats with FIP based on its benefit in treating vasculitis (inflammation of the blood vessels) in humans and cats. Vasculitis is one of the hallmarks of wet FIP. Unfortunately, this treatment ultimately has not proven beneficial. Propentofylline, a similar drug, was also studied, and it too was proven ineffective. As such, the treatment of FIP is generally symptomatic and supportive. Nutritional support, antibiotics and corticosteroids may produce a temporary alleviation of clinical signs, but the disease invariably progresses.

Recently, the use of an investigational drug in some cats with FIP has offered a glimmer of hope. The drug, Polyprenyl Immunostimulant (PI), is an investigational veterinary biologic with low toxicity that can be administered orally. In a report in the Journal of Feline Medicine and Surgery, PI was given to three cats with the dry form of FIP. One of the cats was treated for only four-and-a-half months, but survived 14 months. The other two cats were alive and well two years after the diagnosis and were still receiving treatment at the time the article was published.

The investigators also tried administering PI to cats with the wet form of FIP, but with poor results. They speculate that this is because the wet form progresses rapidly and does not allow adequate time for an immune response to modify the course of the disease.

At the time the article was published, the drug was not commercially available. However, it has recently been given a conditional license and is available from Sass & Sass, Inc. Additional studies using PI are ongoing.

Although this was a very small study, given the generally accepted fatal outcome of FIP, the use of PI offers a ray of hope that some form of treatment may become available in future. — Arnold Plotnick, DVM