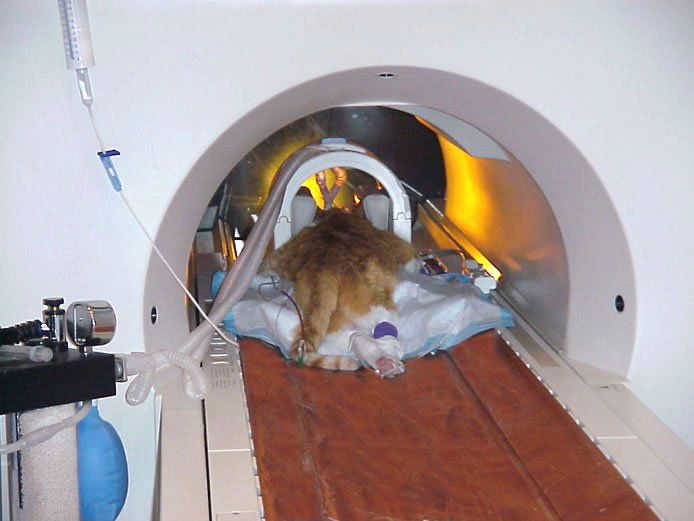 Among all imaging technologies employed to explore the internal structures of a cat’s body, none is more complex and, in some respects, more effective than magnetic resonance imaging (MRI). During the past two decades, this sophisticated technology has become immeasurably valuable to veterinarians as a tool for diagnosing several feline disorders.

The unique capabilities of MRI are especially useful for identifying dangerous, perhaps life-threatening, conditions associated with a cat’s brain or spinal column, according to Dr. Amy Sato, DVM, an associate professor in the Cummings School’s department of clinical sciences.

The fundamental technology and essential machinery that enable MRI are a sophisticated product of several scientific disciplines — mainly physics, biochemistry, mathematics and computer science. Some of the underlying concepts involved in this imaging method originated centuries ago, while many of the advances in MRI technology have been made only during the past few decades.

In the simplest terms, an MRI procedure involves the following: An anesthetized cat lies unconscious and motionless upon a platform that is housed within a large, donut-shaped aperture, open at the front and back. The platform is situated within a high-strength magnetic field produced by a large surrounding electronic device. The magnetic field causes subatomic particles (protons) that normally spin around within the atoms in a patient’s body to line up in a variety of distinctive patterns. (Most of the protons are hydrogen protons, since hydrogen is abundant in water, and water constitutes most of an animal’s body, notes Dr. Sato.)

When these protons line up, a radio-frequency pulsation, like a radio wave, is emitted into the patient’s body, which deflects the hydrogen atoms and their spinning protons. These pulse sequences create signals that are instantaneously transmitted to a computer, and the computer then interprets the signals and produces concise cross-sectional images of the animal’s internal organs and tissues. The resulting images — visible in shades of black, white, and gray — can then be viewed on a monitor and analyzed by an attending radiographer and other veterinary personnel.

“An entire scanning procedure for a cat’s brain,” says Dr. Sato, “will take about 45 minutes. But that is broken down into several individual scans, each of which will take between two and 10 minutes — usually about five minutes per scan — with each scan producing a series of visual images, or ‘slices.’ During a procedure, the cat never moves — the machine does.”

The first fully functional MRI device was developed in the mid-1900s and, in its earliest days, was used exclusively in human diagnostic procedures. “The technology’s first clinical application in animals was in the early 1990s,” says Dr. Sato. “But even then, most people who wanted to do a veterinary MRI examination would have to make an after-hours appointment at a hospital for humans.”

Where to find MRI

Currently, hundreds of MRI devices are in use for veterinary imaging throughout the U.S., mostly, she notes, in large referral practices, at university hospitals such as Tufts, or in specialty practices exclusively dedicated to veterinary imaging.

MRI has several characteristics that make it superior to other imaging techniques, says Dr. Sato. Among its distinctive virtues is the technology’s ability to enable the capture of various orientation planes — different angles on a single portion of tissue — without moving a patient’s body. With MRI, this can be accomplished by merely changing the settings on the computer.

“As far as neural disease and disorders of the central nervous system — the brain and spinal cord — are concerned,” says Dr. Sato, “MRI is, hands down, the best. If I were to take an X-ray of the brain, the chance that I’ll spot the problem — a tumor, for example — is very, very slim, almost nonexistent. And because a cat’s brain is encased in bone, ultrasound is also useless in most cases because ultrasound can’t penetrate bone. So if you have an animal with brain disease, the only two modalities that would be of use are CT and MRI. But CT has limitations as well, in that soft tissue contrast resolution—the ability to differentiate various tissues such as the white matter and gray matter of the brain—is not very good with CT, while it is quite good with MRI.”

Therefore, explains Dr. Sato, MRI is by far the best imaging technology for evaluating feline seizures and other nervous system conditions that are localized to the head or spine. “If an MRI image indicates that there is a lesion on a cat’s brain,” Dr. Sato explains, “I can use various settings to tell whether it’s a blood clot or a tumor that’s responsible for the lesion. So, for diagnosing brain disease, MRI is definitely the modality of choice.” Following such a procedure, Dr. Sato and her colleagues in radiology will confer with a veterinary neurologist to further analyze the images and, it is hoped, to arrive at a definitive diagnosis.

Despite MRI’s clear superiority to other imaging modalities when it comes to diagnosing brain and spine disorders, she points out, it is not appropriate in a variety of other situations. For example, she says, “MRI isn’t something we would routinely use to diagnose a kidney disorder. For that and other abdominal disorders — especially for very small cats — we would use ultrasound, which is excellent for imaging the kidneys. Also, ultrasound doesn’t require anesthesia, and it is much less expensive than MRI.”

The MRI facility at Tufts, says Dr. Sato, consists of a room in which a large structure encloses the imaging equipment and a table that can accommodate cats and other small animals of various sizes. This enclosure is designed to shield the equipment and the magnetic field that it generates from stray radio waves that might interfere with obtaining a clear image. In an adjacent area is a control room with a window, which allows a clear view to the imaging procedure, and the computer equipment that will analyze the data from the MRI device and display the images.

Those on hand for a procedure will include a radiologist, a computer technician, and an anesthetist, whose sole task is to keep an eye on the patient. During the procedure, only the anesthetist will remain in the room where the imaging is being carried out to make sure that the patient remains safely anesthetized and is absolutely motionless.

Aside from the need for a cat to be anesthetized, the chief drawback to the procedure has to do with its cost. “MRI is the most expensive imaging modality that is in general use,” says Dr. Sato. “One imaging session, excluding the cost of anesthesia, would typically cost about $1,200, while two X-rays would cost about $170, an ultrasound would cost about $290, and a CT study would cost about $750 plus the cost of anesthesia.” The relatively high cost of MRI stems from the fact that “the equipment is very sophisticated and the machinery is very expensive. It requires a lot of maintenance to make sure that it is performing well.” — Tom Ewing