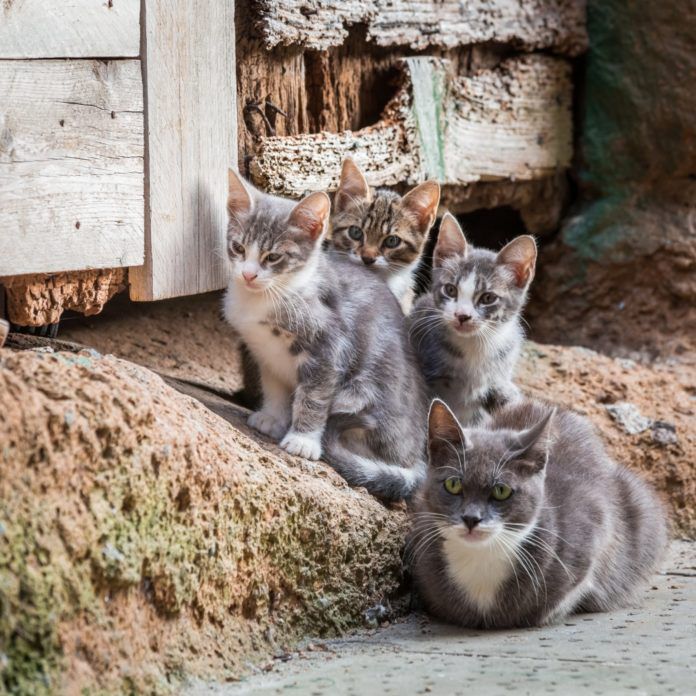 Cats are well-recognized for their fertility. Bastet, the Egyptian goddess of fertility, is depicted as a cat in artwork, and the ancient Egyptians worshipped cats as symbols of fertility. When it comes to making babies, the feline is one of the most prolific domestic pets around. Cats are known for their ability to reproduce in their first year of life, and like rabbits, they are capable of multiple pregnancies within a single reproductive season.

Because of their reproductive efficiency, the population of un-owned cats can expand rapidly, bringing with it considerable problems. According to The ASPCA, an estimated 1.4 million cats are euthanized yearly in U.S. animal shelters alone.

Currently, surgery (spaying and neutering) is the preferred approach to sterilization. Trap-neuter-release (TNR) programs have helped to reduce the feline population in many countries, but there are limits to the programs’ effectiveness. Finding other methods of controlling the feline population, both owned and un-owned, is a major international welfare challenge.

The use of progestins
Reversible contraceptives are highly desired by purebred cat breeders for managing heat cycles. Progestins are potent synthetic derivatives of the hormone progesterone. These compounds have been around for years and have been used to control the reproductive cycle of female domestic animals, mainly by suppressing the signs of heat, as well as preventing ovulation. The two most common ones are megestrol acetate (MA) and medroxyprogesterone acetate (MPA).

Although these drugs are safe when given in low doses, the potential for adverse side effects when used at higher (and improper) doses have scared many veterinarians from prescribing them. However, judicious use of progestins allows breeders to achieve a short-term, reversible block of a queen’s fertility. Use of these compounds to control reproduction in feral cat colonies is controversial.

How melatonin can work
Cats are “seasonally polyestrous” — this means that they cycle several times during their breeding season. Their reproductive activity is influenced by photoperiod (how many hours of daylight they are exposed to). Cats are considered long-day breeders. In the northern hemisphere, ovarian activity typically stops in October as the days get shorter, and resumes in January as the days get longer. When the days get shorter, more melatonin — a hormone produced by the pineal gland — is produced. Administration of melatonin physiologically fools the cat into thinking the days are shorter, thus suppressing reproductive function.

Giving it orally, however, is unlikely to reliably suppress fertility unless administered at a set time of the day, ideally around two hours before darkness. This kind of schedule is obviously impractical for most people. Melatonin implants, inserted under the skin, maintain a constant serum melatonin concentration. How rapidly they work, and how effective they are, varies based on the dosage used. For example, an 18 mg implant suppressed heat in nine out of nine female cats, while a 12 mg implant suppressed heat in only two out of four cats.

Unfortunately, suppression of heat is short: The implants are effective for only two to four months.

When implanted in males, it effectively and reversibly reduces sperm production. Whether a female cat can become pregnant if mated with a male cat that has been given a melatonin implant is unknown; fertility trials are still needed.

Contraceptive vaccines
Trap-Neuter-Release (TNR) programs have been a popular method to reduce populations of un-owned free-roaming cats. Besides the economical and logistical constraints of TNR, it is also a challenge to sterilize enough animals to see a sustained decline in the population. Another option — called “trap-contracept-return (TCR)” — could offer unique value for population management of feral cat populations. For the past two decades, multiple studies have been published on the effect of an immune-contraceptive vaccine on feline fertility.

The vaccine, when injected, induces antibodies that inactivate the hormone GnRH. Without GnRH, reproduction cannot occur. The vaccine, manufactured under the trade name “GonaCon,” is currently registered with the US Environmental Protection Agency (EPA) for contraception of female white-tailed deer. A similar vaccine, GonaCon-Equine, is for female wild horses and burros.

Studies indicate the potential for multi-year contraception. In female cats, the median duration of contraception was about 39 months. The effect on male cats was less predictable and of shorter duration (14 months). While a few cats may require sedation to ensure proper injection, the vaccination process does not require anesthesia, and cats do not have to be kept overnight like they often do after surgical sterilization. Since these studies were performed, the composition of the vaccine has changed a little, and further investigation of the safety, efficacy and duration of contraception is warranted.

The goal is to develop a formulation of GonaCon that provides multiple years of infertility with a single injection. Studies are currently underway to evaluate the ability of GonaCon to suppress fertility among female cats in a semi-controlled environment that closely approximates the living environment of free-roaming cats.

How a booster could help
Another study is being performed to evaluate the safety of a ‘booster’ vaccine in extending the period of infertility in cats that have already received an injection in the past. Although a vaccine that would confer permanent infertility would be ideal, free-roaming cats have been found to have a relatively shorter average lifespan and high kitten mortality rate, thus making a multi-year contraceptive a valuable tool for population control and stability. Combined with TNR programs, it might allow the TNR program extended time to catch and surgically sterilize cats for surgery.

Contraceptive implants
Deslorelin is a potent synthetic form of the hormone GnRH. When implanted under the skin, the synthetic hormone causes a prolonged stimulation of the GnRH hormone receptors. This causes them to become desensitized, resulting in a lack of synthesis of other hormones needed for fertility. The result: temporary infertility. The implant is already licensed in select countries for the long-term suppression of fertility in adult male dogs and male ferrets.

Studies in cats have shown the implants to be safe, effective and reversible in male and female cats. When given to cats after puberty, an implant suppressed production of sex hormones for approximately 20 months (range: 15 to 25 months) in male cats and 24 months (range: 16 to 37 months) in female cats. When implanted in female cats before puberty, at four months of age, it delays the onset of puberty to approximately ten months of age. (Puberty typically occurs in cats at about six months.)

Approximately two years after treatment of adult cats, fertile matings occurred, demonstrating the reversibility of the implant. The large variability in the duration of the suppression of fertility makes it difficult to determine the optimal time for reimplantation. Also, the effects of repeated treatment still need to be investigated.

The ease of administration, efficacy, safety and reversibility of Deslorelin implants make this a potentially promising method for controlling reproduction in both male and female cats, especially for owners of cats who want to postpone breeding only temporarily. Other advantages include being able to suppress reproduction in cats that cannot be surgically sterilized because of undue anesthetic risk.

Male contraception
Intratesticular and intraepididymal injections, made directly into the testicle or epididymis, have been investigated as a method of male contraception for more than six decades. The goal of these injections is to cause azoospermia — absence of viable sperm in the semen. The agent used in the injection is either calcium chloride or zinc gluconate. Injecting directly into the testicle results in decreased production of sperm. Injecting into the epididymis blocks sperm transport, but does not alter sperm production. Neither type of injection entirely eliminates testosterone production, which may be undesirable for pet cats because a major reason for surgical sterilization of male cats is to prevent or reduce unwelcome behaviors such as urine marking, roaming and aggression. Because the injections require anesthesia, most people feel that injections do not offer any benefit over surgical sterilization other than cost, which may be lower for the injections.

Researchers have long been studying approaches to non-surgical sterilization. The ultimate goal is to produce a safe, single-administration, cost-effective, non-surgical contraceptive that lasts for the lifetime of the pet. This would enable sterilization of many more cats and dogs, avoiding surgery and anesthesia and helping to curb the serious problem of overpopulation.— Arnold Plotnick, DVM, DACVIM