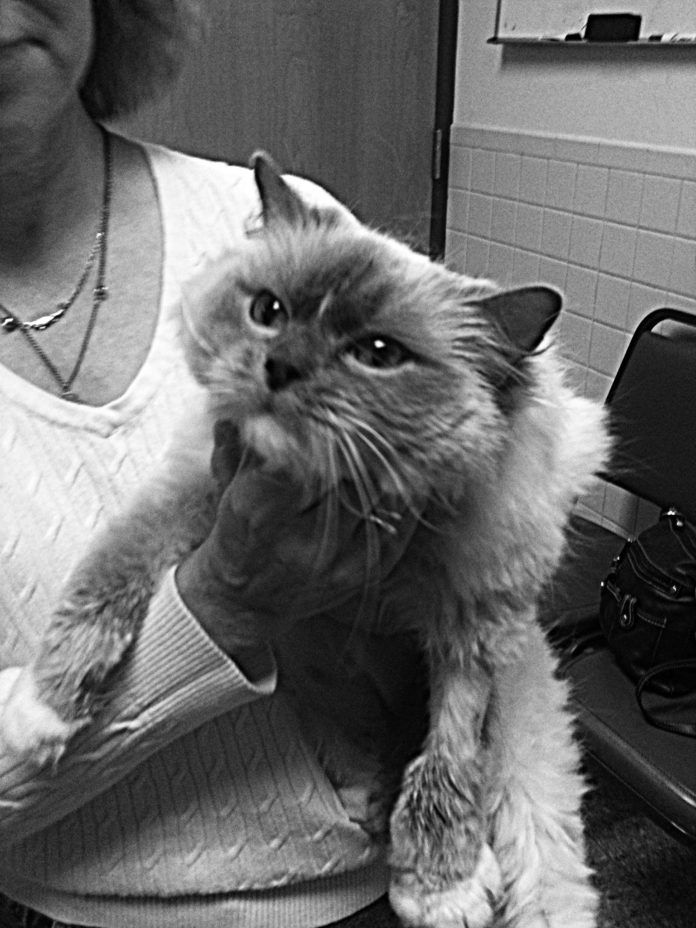 Annabelle, a 5-year-old Ragdoll, had been lethargic with little appetite. She was hiding under the bed — unusual behavior for her. The intact cat also had vaginal discharge. Her owner, Ragdoll breeder Denise Celona of Rutland, Massachusetts, took her to the local veterinarian, thinking the cat had developed a uterine infection called pyometra. An x-ray was inconclusive on that score, but it did show that the heart was enlarged and ovoid, or egg-shaped, which is not normal for cats. At that, Annabelle and her owner were referred to the Foster Hospital for Small Animals at Tufts Cummings School of Veterinary Medicine.

By the time emergency and critical care specialist Sean Majoy, DVM, saw Annabelle, she was having difficulty breathing. Her respiratory rate was up significantly. On examination, her heart and lungs sounded muffled instead of clear. A look via ultrasound showed that the pericardial sac, a thin membrane surrounding the heart, was filled with fluid. This was causing constriction, making the heart unable to pump blood effectively.

But what was the source? Pericardial infections are almost unheard of in cats.

The vaginal discharge provided a clue. A second ultrasound showed that Annabelle had a uterine infection as well. A culture and biopsy of both the uterus and the pericardial fluids revealed a single culprit: E. coli bacteria. The harmful organisms, whose point of entry into the body was deduced to be the vagina, had traveled from Annabelle’s uterus through the bloodstream and then settled in the sac surrounding her heart.

Draining the fluid relieved Annabelle’s signs, but only surgery could resolve the infection so that the symptoms wouldn’t return. Two days after her diagnosis, Annabelle underwent an operation to remove part of her pericardial sac. At the same time, she was spayed.

Surgical specialist John Berg, DVM, opened the cat’s chest — a procedure known as a thoracotomy — and removed an approximately 1-inch-diameter oval section of the sac near the top of the heart. Like a human appendix, the pericardial sac is not critical to the body; the heart will function fine even if it is completely removed. Dr. Berg also flushed the interior of the sac with sterile saline to remove any remaining fluid and pus. Any minor residual infection would then drain into the chest cavity, where it could be better fought by the body. The surgery, including the spay, took less than two hours.

Annabelle was hospitalized for three days with a chest tube and then went home. A four-week course of antibiotics finished off the infection, and a follow-up echocardiogram showed that her heart looked normal.

“She recovered great,” says Dr. Majoy, who wrote up the unusual case, to be published in the Journal of Veterinary Emergency and Critical Care.

“Pericardial disease like this is rarely seen in cats,” he says. “The few that I’ve seen before [were] from . . . cancer or sometimes heart failure . . . That was definitely an absolute first.”

With tests, surgery, and hospitalization, Annabelle’s treatment cost approximately $5,500. Celona had to dig into her savings to pay for it and borrowed some of the money, too, but she would do it again, she says, even if she had to work a second job. “I couldn’t see myself having an animal put down if something could be done,” she adds, grateful that she could find a way to afford it.