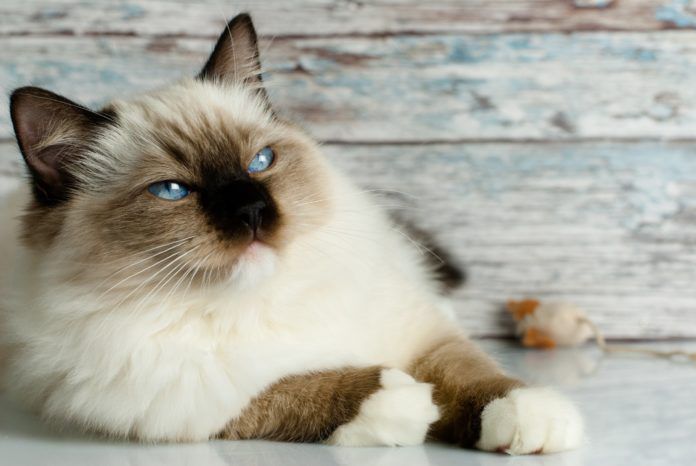 Compared with its human counterpart, the feline heart is quite tiny — only two inches or so in diameter, about the size of a golf ball. This hollow, muscular organ, however, is structured almost exactly like the human heart and plays the same powerful life-sustaining role.

Unfortunately, the feline heart also shares with the human heart a vulnerability to certain life-threatening disorders. Foremost among these disorders is hypertrophic cardiomyopathy (HCM), the most commonly diagnosed cardiac disease in cats.

According to Vicky Yang, DVM, a veterinary cardiologist at Tufts, the condition is most frequently diagnosed “in middle-aged cats, but may be seen occasionally in cats as young as one or two years of age.”

If the heart is functioning smoothly, the cardiac system will serve a cat well for many years. For some cats, however, a number of things can go wrong from the very start. Although most feline heart disorders are acquired during the course of an animal’s life, some kittens are born with such congenital disorders as heart valve malformations and holes in the internal walls of the heart.

Some kittens may respond favorably to medical therapy for these disorders, but surgical treatment is not usually feasible, and the prognosis for a severe congenital defect is generally poor. Minor defects, however, may be well tolerated and even allow a normal life.

As for acquired cardiac conditions in cats, the most common by far is cardiomyopathy, which, in one form or another, accounts for almost two-thirds of all diagnosed feline heart disorders. In broad terms, cardiomyopathy is brought about by a structural abnormality in the muscle enclosing one or both ventricles, with the affected chamber taking on a thickened, dilated or scarred appearance. (The left ventricle is always affected; right-chamber involvement may also occur, but is less common.)

The abnormality sets the organ’s blood-collecting and blood-pumping mechanics awry, and such dysfunction can progress to congestive heart failure — a collection of fluid in the chest cavity (pleural effusion) and in the lungs (pulmonary edema) — with resultant respiratory distress.

Other potential outcomes of cardiomyopathy include paralysis-causing blood clots, which arise from the left atrium, and sudden death. Some feline cardiomyopathies are secondary diseases — those whose causes are specifically identifiable, such as anemia, hyperthyroidism or high blood pressure. However, most are primary diseases — those whose origins are either genetic or unknown.

Among these primary diseases is a disorder called restrictive cardiomyopathy, which is caused by the excessive buildup of scar tissue on the inner lining of the ventricle. Another is dilated cardiomyopathy, which is characterized by weak heart pumping and reduced blood flow from the heart. HCM, however, is most prevalent by far — diagnosed by some estimates in 85 percent to 90 percent of primary cardiomyopathy cases. The disorder is chiefly characterized by a thickening of the muscle tissue associated with the left ventricle, which results in the deficiency of the heart’s ability to relax and fill with blood.

Some breeds are susceptible

According to Dr. Yang, the disorder develops with no explanation other than the strong likelihood of hereditary influence. A few feline breeds — Ragdolls and Maine Coons, most notably — appear to be at elevated risk for HCM, and she points out that researchers have so far linked one gene to the disorder. “So we don’t really know what causes it,” says Dr. Yang, “but we suspect that it’s a genetic disease.”

She points out an obvious hereditary factor: “If you have two affected parents,” she says, “you’re going to have affected offspring. And we often see siblings come in to be treated.” However, while genetic predisposition appears to put some breeds at elevated risk, no breed is immune to the threat of HCM.

Signs to look for

Indications that a cat may have the disorder include lethargy, a decline in activity, inability to move the rear legs, rapid and labored breathing, weakness, sudden collapse and evidence of fluid accumulation in the lungs. However, notes Dr. Yang, “Cats are very good at hiding their signs, so we often see them at end stage, when they’re not moving around and are struggling to breathe. In some cases, we don’t discover that a cat has HCM until the animal has been brought into the emergency room.”

The initial objective in diagnosing HCM is to exclude other conditions — such as severe anemia, hyperthyroidism or hypertension — that could cause similar cardiac signs. In most cases, X-rays will be taken and blood pressure measured. Sometimes an echocardiogram or a blood test to identify heart muscle damage will be done. “Also, there is a protein that’s given off by the heart muscle when it is stretched, and we can test for elevated levels of this protein in the blood stream,” explains Dr. Yang.

The definitive diagnosis, however, is achieved through ultrasound imaging of the heart — an echocardiogram — which will clearly reveal any gross abnormalities.

Treatment for HCM depends largely on the severity of the disease. “We don’t have anything that can slow the progression of the disorder,” says Dr. Yang. “What we do have, however, are medications to keep fluid from building up in the lungs so that the cat can continue to breathe normally for a period of time.” Medications such as beta-blockers, for example, which slow a cat’s heart rate, decrease the animal’s need for oxygen, reduce demand on the ventricles and help the heart muscle to relax are commonly used to treat feline HCM.

Many cats diagnosed with HCM — whether or not they’re on medication — can live for many years, but in some cats, the disease will progress rapidly and inevitably lead to life-threatening complications.

Dr. Yang’s advice to owners of cats diagnosed with the disorder: “Start monitoring the cat’s breathing rate and effort at home so that you’ll be able to detect any changes. If the breathing rate is a little bit faster than normal, you can pick it up right away and the problem can be treated before it becomes a medical crisis.” — Tom Ewing