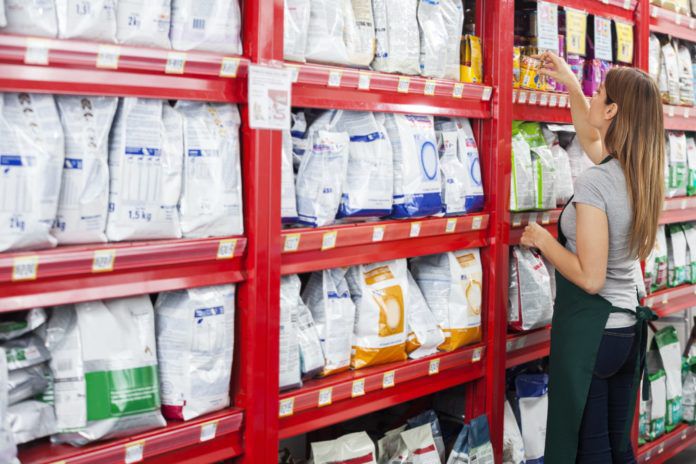 If you think you’re noticing more and more grain-free pet foods on the shelves, you’re right. According to data in the Dog and Cat Food Ingredient Center —which examines pet food trends and ingredients — 73 percent of manufacturers producing dry cat food in the United States now have at least one grain-free product.

In fact, the Center’s database showed nearly half of the products in the Dog and Cat Food Ingredient Center did not contain grains, demonstrating that this is a trend that has taken off rapidly. But are these foods actually better when compared to traditional grain-containing cat foods?

Only last year, the Clinical Nutrition Team at the Cummings School of Veterinary Medicine weighed in on this new trend, saying that it is strong on marketing and soft on actual health benefits. It would seem that pet food manufacturers have made headway with grain-free pet foods by addressing pet owners’ largely unwarranted concerns that their cat may have allergies to grains or be suffering from a gluten intolerance, also associated with grain-based products.

But food allergies are relatively rare in pets, particularly from grains. Rather, the source of food allergies that actually do occur tend to be from animal-sourced ingredients such as beef, dairy and chicken, found in both grain-containing and grain-free pet foods. And there have been no studies documenting gluten intolerance in cats.

The truth about food allergens

Allergens were, in fact, found just as often in grain-free foods as in grain-containing diets. Another issue is that individual diets varied in the type and amount of carbohydrates found in the diets whether they contained grains or not. In other words, those worried about allergens or the amount of carbohydrates will not necessarily find a lower carbohydrate content or a decrease in the presence of common food allergens.

Though peas, lentils and beans are often used to replace grains — which include rice, barley, oats and other grains as a substitute carbohydrate — they do not provide better nutrition and, unlike most grains, may cause some issues with digestion (just like some people have gastrointestinal issues when they eat large amounts of beans!). The team explained that the overwhelming majority of cats efficiently digest and utilize nutrients from grains that are found in most pet foods.

Earlier this year, Tufts veterinary nutritionists Cailin R. Heinze, VMD, and Lisa M. Freeman, DVM, PhD, were involved in a new study that compared 77 dry cat food diets — 35 grain-free and 42 grain-containing recipes. The diets were available through online retailers. Common ingredients were considered to see how the two types of diets measured up, providing some surprises.

One supposedly grain-free diet contained barley, a grain, in its ingredient list. Other surprising ingredients found in many diets were watercress, blackberry, apricot, chia, zucchini, lettuce, celery, avocado, artichoke and papaya — not the usual fare to tempt finicky felines and not nutritionally superior to more mundane-sounding ingredients.

The same goes for cranberries, which were present in nearly half of the diets looked at in the study. Though manufacturers convey the tart fruit’s benefit to the urinary tract, there are actually no studies showing this in reference to cats. Add to that the rarity of urinary tract infections in cats and it becomes clearer still that the only benefit to cranberries in a cat food diet is that it makes the consumer feel that they are doing more to protect their cat’s wellness.

Grain-free diets in this study tended to include exotic meats such as rabbit, bison and venison. But again, these ingredients don’t necessarily contribute a more significant boost to your cat’s health than typical animal-sourced food ingredients. In fact, the most common animal-sourced ingredients in both types of diets were egg, fish and poultry, such as chicken, duck and turkey.

But there were differences found between the two diets in their most common plant-sourced ingredients, with grain-free diets containing potato, carrots, peas and cranberries, and grain-containing diets using flax, rice, oats, and — just as in grain-free — cranberries. Nutritionally, these differences were essentially a wash — all the diets met The Association of American Feed Control Officials (AAFCO) standards.

If it’s calories you are concerned about, the answer may not be about deciding between a grain-free or grain-containing diet. Calories were fairly equal in both types of diets, though there was also a wide range of calories found overall, within the complete number of products analyzed. (See related article on weight loss on page 7 of this issue.)

Ingredients do matter, but not within the sole context of whether your cat’s food is grain-free or grain-containing. Rather, it’s about what is in the mix in terms of calories, protein, carbohydrates, serving size and ingredients. It’s not so much about whetting your appetite, but serving your cat’s nutritional needs.

Your best bet for looking after your cat’s optimum health through the food you provide may be looking at labels and fact-checking advertising claims. The recipe lists on some of the cat foods included in the comparison are appealing to a human’s sense of healthful eating and a rounded diet, but these rules do not apply to cats who have their own set of dietary needs.

Keeping in mind not only how much you are feeding — but also what serving size is advised — should provide the best recipe for your cat’s overall dietary health management. — Constance Lindner