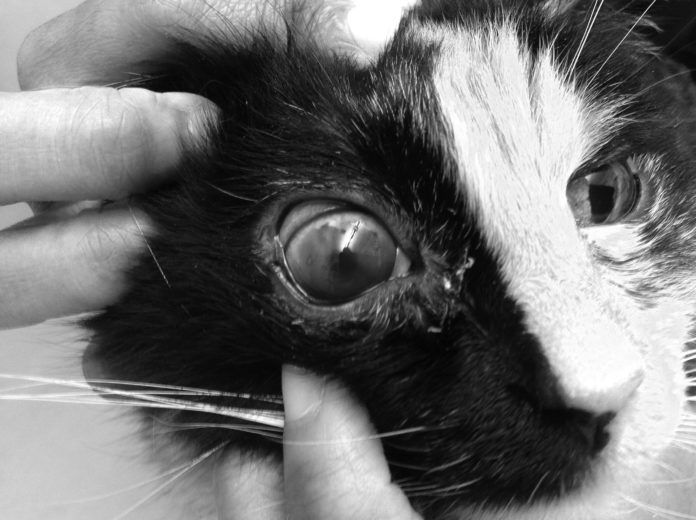 One of the first things that your doctor does, after taking your temperature and listening to your heart, is take your blood pressure. When you take your cat to the veterinarian, however, blood pressure isn’t routinely measured. It seems ironic that blood pressure monitoring has yet to become a routine veterinary procedure, given that historically, the first attempts to numerically quantify blood pressure were conducted in animals.

The two most common indirect methods are the Doppler technique and the oscillometric technique. The Doppler technique involves placing a small ultrasound probe over one of the large arteries in the limbs. An amplifier connected to the probe produces audible sounds for every pulse beat. A blood pressure cuff is placed just above the probe and is inflated until the vessel is occluded and the pulse sounds can no longer be heard. The cuff is then slowly deflated. The pressure at which the sound of the pulse can be heard consistently is the systolic arterial blood pressure.

The oscillometric technique utilizes a blood pressure cuff that is attached at the base of the tail. The cuff is inflated and the artery is occluded. When the artery pulsates, detectable oscillations occur. Systolic arterial blood pressure is determined when the magnitude of the oscillations suddenly increases. Regardless of the technique used, at least five measurements should be performed and the average value determined in order to increase the accuracy of the measurement.

In human medicine, the terms “essential hypertension” or “primary hypertension” are used interchangeably to describe high blood pressure for which there is no clear underlying cause. This is by far the most common type of hypertension seen in humans.

“In cats, however, nearly all cases of hypertension are secondary to another condition, most commonly chronic kidney disease (CKD) and hyperthyroidism,” explains Michael Stone, DVM, an internist at Tufts University School of Veterinary Medicine. These conditions are seen in older cats (generally, cats older than nine years of age), thus it is recommended that all cats in this age group have their blood pressure measured as part of the routine physical exam.

Uncommon Reasons for Hypertension in Cats

Less common causes are hyperaldosteronism (a disorder of the adrenal gland), pheochromocytoma (a tumor of the adrenal gland) and chronic anemia. In humans, there is a strong association between obesity and diabetes and hypertension, but this has not been shown to be the case in cats. “Approximately 20 percent of cats with CKD have high blood pressure. The presence of hypertension is unrelated to the severity of the CKD. Cats with mild CKD can have severe hypertension, while those with advanced CKD may have blood pressure that measures consistently normal,” notes Dr. Stone. The prevalence of hypertension in cats with hyperthyroidism is also around 20 percent. Cats treated for hyperthyroidism remain at increased risk for the development of hypertension for up to six months.

Once hypertension is diagnosed, long-term management of the cat is required. As noted above, if left untreated, systemic hypertension can cause damage to a variety of tissues.

Damage to the eyes is well-documented, with hypertensive cats often developing hemorrhage into the anterior chamber of the eye, hemorrhages on the retina or retinal detachment, with subsequent partial (or total) vision loss. In human patients, there is a relationship between increasing blood pressure and death due to cardiovascular disease.

Cats with systemic hypertension also suffer cardiac consequences, as it is difficult for the heart to pump blood against a high pressure gradient. As the heart pumps harder, the heart muscle becomes thicker and less compliant.

Listening to the heart with a stethoscope may reveal a heart murmur or an abnormal rhythm. Eventually, the heart may fail and congestive heart failure may develop. As noted above, cats with chronic kidney disease are at increased risk of developing hypertension. If uncontrolled, the hypertension can accelerate the progression of the kidney damage. Neurologic signs of hypertension can manifest as mental dullness, facial seizures and photophobia (increased sensitivity to light, usually seen as squinting). Any cat with clinical signs matching those listed above should have their blood pressure assessed.

“It is important to recognize and treat hypertension early,” says Dr. Stone. The cardiac changes that occur secondary to hypertension are thought to be reversible if high blood pressure is brought under control. Vision loss from hypertension rarely returns, however, so early recognition and treatment is imperative.

There have been many proposed methods of treating feline hypertension. These include the various classes of drugs, such as diuretics, beta-blockers, calcium channel blockers and a class of drugs known as angiotensin-converting enzyme (ACE) inhibitors. “My drug of choice for lowering blood pressure in cats is the calcium channel blocker amlodipine, given once daily,” explains Dr. Stone.

Advances in the recognition, diagnosis and treatment of hypertension are now affording veterinarians the ability to prevent blindness, avoid heart failure and slow the progression of kidney disease in our feline patients. As technology continues to improve, it can be expected that blood pressure measurement will become as routine in animals as it is in humans.