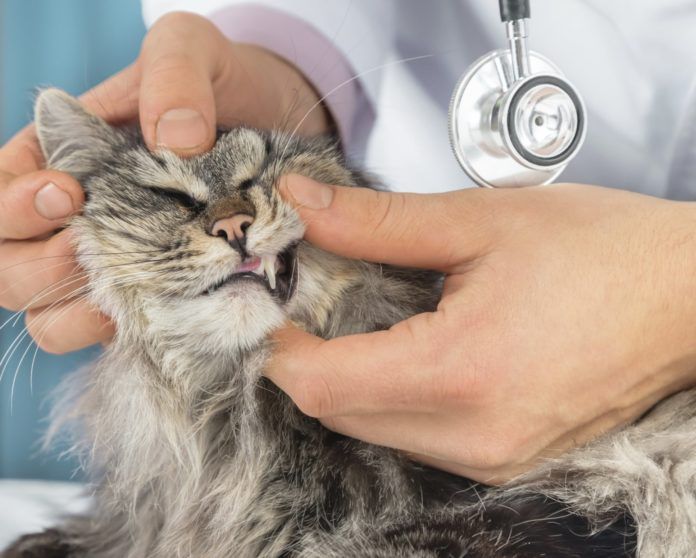 Discovery of blood in the feces when cleaning the litter box is one of the more common reasons for concerned cat owners to bring their cat to the veterinarian. When cats bleed from the large intestine or colon, it is beyond the point where digestion occurs, and any blood associated with the feces appears red.

Gastrointestinal (GI) hemorrhage is defined as the loss of blood into the GI tract. Loss of blood can originate from various sites in the GI tract — the mouth, esophagus, stomach, small intestine and large intestine/colon. When cats bleed from the mouth, esophagus, stomach or small intestine, the blood gets digested, resulting in melena — black tarry feces.

The clinical signs of GI hemorrhage are not limited to the appearance of the feces, however. Cats with hemorrhage originating in the stomach may vomit up blood. This is called hematemesis. If the bleeding is recent, the blood is more easily recognized, as it still looks red in appearance. If the blood gets partially digested in the stomach before vomiting occurs, the blood takes on the appearance of “coffee grounds,” which may be more difficult for clients to recognize as blood.

Veterinarians and owners should not be misled into thinking that all instances of vomiting blood and black tarry feces indicate hemorrhage of GI origin. Coughing up blood (hemoptysis) is sometimes misidentified as vomiting of blood. Hemoptysis actually results from disease of the airways and lungs. Cats that cough up blood may swallow some of that blood, resulting in hematemesis and melena — and delaying or confounding the true diagnosis.

Hemorrhage from the nasal cavity — called “epistaxis” — can also result in hematemesis and melena if the amount of blood swallowed is significant. Ongoing or severe blood loss can result in anemia — a deficiency of red blood cells — that could be life-threatening and may require a transfusion if the cat is to survive.

How to make a diagnosis

Making a definitive diagnosis of GI bleeding first involves identifying the site of the hemorrhage, and then the cause. As mentioned above, the presence of melena localizes the site to the stomach or small intestine. A history of hemoptysis or epistaxis suggests that the GI tract is just a conduit for the swallowed blood and is not the primary site of the hemorrhage.

Fresh red blood in the feces suggests a large intestine or colonic origin for the bleeding. Gastrointestinal bleeding may be acute or chronic. Chronic hemorrhage may be insidious, and therefore more difficult to detect.

The mouth can offer clues

If the clinical signs point to upper GI bleeding, the first place to look is the mouth. Severe periodontal disease, foreign bodies, oral trauma and bleeding tumors can result in hemorrhage. The diagnosis and treatment of these disorders is usually straightforward.

Diseases of the esophagus (the tube connecting the oral cavity to the stomach) are uncommon in cats. Foreign bodies, tumors and inflammation of the esophagus secondary to acid reflux are disorders that may lead to esophageal hemorrhage. Excessive salivation, difficult or painful swallowing, and regurgitation of food are common signs associated with esophageal disease.

Foreign bodies should be removed, either using an endoscope or via surgery. Tumors of the esophagus may be addressed with surgery or chemotherapy, although the prognosis for these tumors is often grave. Inflammation resulting from acid reflux is usually treated by administering drugs that suppress gastric acid secretion, as well as drugs that form a protective barrier on the ulcer and foster more rapid healing.

The stomach is a common site of origin for GI hemorrhage, with gastric ulcers being the most common cause. In dogs, most cases of gastric ulcer are associated with drug therapy, especially non-steroidal anti-inflammatory drugs (NSAIDs) and corticosteroids. Cats rarely get ulcers from corticosteroids, and most NSAIDs are unsafe for cats and thus are rarely given.

Tumors in the stomach

In cats, tumors of the stomach are the most common cause of gastric bleeding. These include gastric carcinomas, lymphoma and mast cell tumors. Clinical signs may include hematemesis and melena, chronic vomiting, weakness, lethargy, poor appetite and weight loss. Anemia due to the blood loss often leads to the appearance of pale gums on physical examination.

Ultrasound of the abdomen is usually helpful in identifying a gastric tumor; however, endoscopy is a better diagnostic test in that it allows direct visualization of the tumor and any associated bleeding, and permits the procurement of biopsy specimens for definitive diagnosis. Treatment depends on the size, extent and type of tumor. Surgical removal may be possible for some tumors. Others, especially lymphoma, may best be treated with chemotherapy.

The presence of Helicobacter

A bacterium called Helicobacter has also been associated with gastric ulcers and occasionally gastric bleeding in cats. Helicobacter is sometimes detected in gastric biopsy specimens during endoscopy.

Because Helicobacter has been identified in biopsy specimens from normal cats, merely finding Helicobacter doesn’t necessarily mean that it is causing illness. However, identification of the organism in a cat with gastric ulceration and bleeding warrants appropriate treatment. Treatment recommendations are frequently changing, although they usually consist of giving at least two antibiotics in conjunction with an antacid.

The small intestine is a less common site of hemorrhage than the stomach in cats. Tumors — as well as severe inflammation from inflammatory bowel disease — are the most likely causes of small intestinal bleeding. Hookworms are bloodsucking intestinal worms that are more commonly found in dogs, but do occasionally affect cats. These worms attach to the lining of the small intestine and ingest the cat’s blood.

Severe infections can lead to significant anemia, especially in kittens. Blood may continue to seep from the site where a worm has bitten, and melena may result. A diagnosis is made by analyzing a fecal sample. Most common dewormers will treat hookworm infections.

Problems of the colon

Colitis — inflammation of the large intestine or colon — is a very common cause of GI hemorrhage in cats. There are several potential causes of colitis in cats, such as bacterial or protozoal infections, inflammatory bowel disease, sudden changes in diet and stress. Fecal analysis can often detect the presence of intestinal parasites or protozoans. Inflammatory bowel disease of the colon requires colonoscopy to obtain a definitive diagnosis. Tumors of the colon are uncommon in cats, but do occur. If the tumor becomes ulcerated and bleeds, it can be a source of hemorrhage.

Typical signs of colonic disease include straining to defecate, increased frequency of defecation, and urgency to defecate, sometimes resulting in defecation outside the litter box if the cat cannot make it to the litter box in time. Most cases of colitis result in diarrhea, but not always. Feces from cats with colitis will often contain excessive mucus, giving it a “slimy” appearance.

Treatment of colitis depends on the inciting cause: Parasites are treated with dewormers, whereas inflammatory bowel disease usually responds to anti-inflammatory medication and feeding a prescription diet. Tumors of the colon may require surgery and/or chemotherapy.

It’s important to note that not all GI hemorrhage is due to primary GI disease. Bleeding disorders such as a deficiency in platelets or a disorder of the coagulation system can lead to bleeding tendencies, which may include GI bleeding. For example, some rodent poisons work by inhibiting certain blood clotting factors, leading to signs of GI hemorrhage.

Major cause of anemia

Gastrointestinal bleeding is an important cause of anemia in cats and may occur for a variety of reasons. Some causes are easy to diagnose and treat, such as intestinal parasites, while others — such as tumors — are challenging and may be difficult or impossible to treat. Cats that vomit blood, pass fresh red blood in the feces or that have black tarry stools should be evaluated by a veterinarian promptly. — Arnold Plotnick, DVM, DACVIM