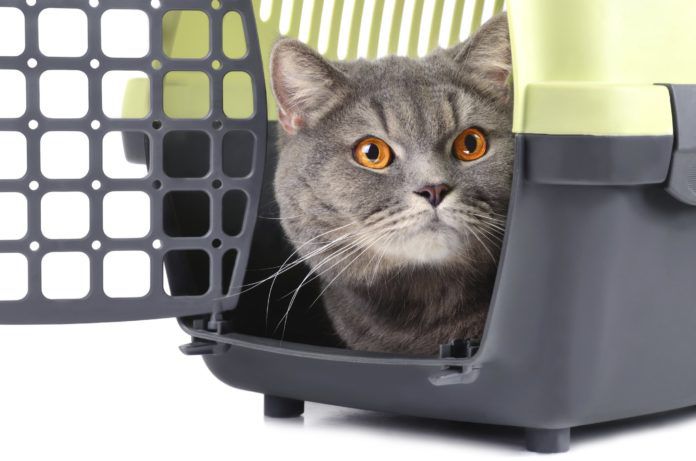 Usually, it happens all of a sudden. Your male cat goes from being able to urinate normally to not being able to pass a single drop of urine. Other times, the condition becomes progressively worse over a couple of days. The cat starts straining to urinate and becomes very anxious or depressed, with an accompanying loss of appetite.

It’s a very dangerous situation. Urine rids the body of toxins, specifically, by-products of metabolism that can be lethal if they are not excreted regularly. In fact, a build-up of toxins resulting from an inability to pass urine can start to make your cat feel lethargic within days.

The cause of the problem is a form of feline lower urinary tract disease (also known as FLUTD). In this instance, the disease manifests itself as an obstruction in the urethra, the tube that collects urine from the bladder and shuttles it from there through the pelvic canal and into the penis. The obstructing material — either a plug made of mucus mixed with minerals and dead cells or stones composed of magnesium ammonium phosphate or calcium oxalate — lodges right near the tip of the penis, an area where the urethra is very narrow.

If Your Cat Can’t Pee, See a Vet Quick

Because not being able to urinate is so dangerous, you should take your cat to the veterinarian’s office as soon as you realize the litter isn’t getting at all wet or forming any clumps, no matter how hard your cat might try to “go.” It will not take long for the vet to figure out the problem.

Recognizing the obstruction is not a diagnostic challenge, according to John Berg, DVM, DACVS, Professor of Small Animal Surgery at the Cummings School of Veterinary Medicine at Tufts University. “These cats are easy for us to recognize not only because the owner tells us they have not been able to urinate, or urinate productively, but also because they have an easily palpable [“feelable”] huge, hard bladder.”

The first course of business is for the veterinarian to pass a catheter to relieve the obstruction. Called a tomcat catheter, this stiff little plastic piece of tubing is passed through the penis up into the bladder. The procedure usually requires sedation or general anesthesia.

“Once the obstruction is relieved with a tomcat catheter, if possible, we’ll replace it with a softer catheter. We’ll then leave that second catheter in for a day or two to allow swelling in the urethra to subside and keep the cat in the hospital during that time for observation,” Dr. Berg says. “Then we’ll remove the catheter and see how he does.”

In most cases, the catheter allows the cat to pass the grit or mucus-based plug, but this is where the owner has to make a decision: Should he or she elect a surgery to prevent reobstruction? The reason the obstructions form in the first place is not well understood — but what is known is that cats who have obstructed once are at relatively high risk of obstructing again.

“Different vets have different approaches to deciding on when surgery should be recommended as a prophylactic procedure,” Dr. Berg comments. “One common recommendation is ‘three strikes and you’re out.’ If the cat obstructs three times, surgery will be strongly advised.

“Personally,” he says, “I feel that any cat who obstructs once is a surgery candidate, especially a cat who is young or middle aged. If you take the cat home and he obstructs again, say, on a weekend or when you are away on vacation, he will have a potentially life-threatening problem with perhaps no possibility of treatment. A cat with an obstructed urethra can die within days if not tended to.” Fortunately, though, with advances in medical management of FLUTD, we now perform fewer surgeries for obstruction than in the past.

Of course, in those rare cases in which the obstruction cannot be relieved with a tomcat catheter, foregoing the surgery is not an option. “It’s as if the opening is obstructed by concrete,” Dr. Berg says. “You can’t even get the catheter through.”

There’s no delicate way to say this. The surgery, called a perineal urethrostomy, involves removing the cat’s penis to eliminate the narrow opening at the tip and creating a new, wider opening further up the urethra. That wider opening, or stoma (hence the “ostomy” in urethrostomy), is created by suturing the round perimeter of the urethra to the skin. In effect, the cat is essentially given female anatomy on the outside of his body.

Many people are understandably horrified by the thought and ask if their cat is going to be upset that he has lost his penis (and testicles if he has not yet been neutered). The answer is no. Cats don’t link their male anatomy to their personal worth, the way a person would. Their psyches don’t let them feel disfigured, either. They just want to keep being fed and pouncing on moving objects. Any psychological discomfort is more the owner’s issue.

That said, there is physical discomfort immediately following the surgery, for obvious reasons, which is why — after one to two days in the hospital for post-op observation — cats are sent home with a few days’ worth of pain medication. “Pain is an issue,” Dr. Berg says, “but it’s temporary, and we are very good at managing it.”

Cat Owners are the Best Nurses

We always emphasize that the owner is one of the most important partners on the cat’s healthcare team, and this is one of those times that nursing skills must be put to serious use.

Once the cat is home, his owner should keep an eye on the incision site and make sure there are no dramatic changes, which would require a trip back to the doctor’s office. “A little blood clot is okay,” Dr. Berg says. “As long as the cat is peeing okay, everything is fine. In fact, it’s best not to remove a clot if one forms because its function is to prevent bleeding. If you remove it, there may be new bleeding, and the process of clot formation will have to begin all over. When the body no longer needs the clot, it will fall off on its own.”

The owner also needs to put shredded paper towels in the litter box for a couple of weeks in place of litter, because the litter can get stuck to the incision site and prove irritating.

In addition, the cat will need to wear an Elizabethan collar — one of those cone-shaped plastic rings — so he doesn’t lick out the sutures, or make a mess of them. The sutures will dissolve on their own after about three to four weeks.

The only possible complication might be a stricture of the stoma site. Wounds, including surgical scars, heal by contraction. If the surgically created stoma contracts too much, it can become too narrow, and the cat may begin straining to urinate again. The surgery site will need to be revised by creating a new stoma slightly further up the urethra. Stricture can result from technical errors in the surgery, so make sure the veterinarian who operates on your cat has done at least a few perineal urethrostomies. A board certified veterinary surgeon will almost certainly be comfortable with the technique.

In a large practice, it won’t be hard to find a vet who has performed several because the problem is not at all rare. “It’s one of the more common operations we do,” says Dr. Berg. “At least one or two a month. Sometimes more.”

If a stricture does occur, you’ll know because two months to a year after the operation, your cat will develop the same signs as before. He won’t be able to urinate — this time because scar tissue is blocking the opening of the stoma.

However, the incidence of stricture is rare — well under five percent. The surgery almost always produces excellent results — and makes a cat who would otherwise be at risk of periodic episodes of urethral obstruction happy and pain-free.