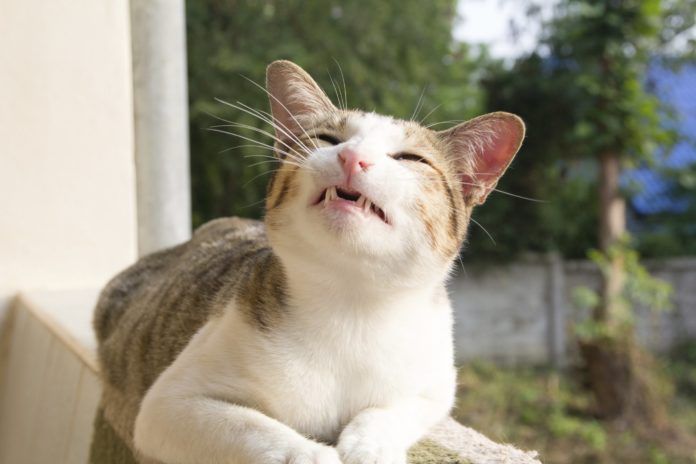 Every so often, one of your cats comes down with a bout of the “sniffles.” In most cases, you have nothing to worry about. The sneezing and runny nose should simply fade away within a few days. But if the signs persist for longer than that — especially if the cat is not eating and not behaving normally, or the discharge from her nose thickens and becomes darker in color — a visit to your veterinarian is in order.

It is possible that the cat is harboring inflammation in her nasal passages caused by an advancing viral or bacterial infection. Even worse, the sneezing could be a sign that the cat has a systemic disease requiring prompt medical attention.

Why they are common
Feline nasal disorders are extremely common, says Michael Stone, DVM, a clinical professor of small animal medicine at Tufts. “I consult on one or two such cases every week,” he says. “If the discharge from a cat’s nose is clear, if she is behaving well, and if her appetite remains good, she can be monitored at home. But she should be examined by a veterinarian if she doesn’t get over the sniffles within a week or 10 days, if the nasal discharge is bloody, green or yellow, or if her behavior is listless.”

The nasal cavity functions as the gateway to a cat’s lower respiratory system — the portal through which oxygen-rich air is inhaled and filtered before passing to the lungs and through which oxygen-depleted air is subsequently exhaled. Most of the nasal cavity’s interior has a corrugated surface that is lined with a mucus-secreting tissue (mucosa). The shallow grooves and ridges on this tissue increase its surface area, and this provides an efficient filtration system that prevents dust and other particles in inhaled air from entering the lungs.

The nasal cavity also serves to humidify and raise the temperature of inhaled vapors before they pass to the lungs. In addition, the nasal passages play a nutritional role, since cats like to smell what they are about to eat. So if a clogged nasal passage interferes with a cat’s ability to smell, she may go off her food and not get her proper nourishment. Consequently, advises Dr. Stone, a veterinarian should be consulted whenever loss of appetite or listless behavior are noticed.

Caused by inflammation
In most cases, he explains, the tearing and runny nose will stem from an acute inflammation of tissue somewhere within the animal’s nasal passages — a condition called rhinitis. If the infection is more widespread, terms such as sinusitis or rhinosinusitis might be used to describe it.

Because all of these conditions are related, they are referred to as sinonasal disease. The most common clinical signs of these disorders — which can range from very mild to severe — are usually self-limiting and ultimately harmless.

However, secondary diseases may occur, and these can have long-lasting and potentially severe consequences. These consequences include pneumonia; vision-impairing eye disorders such as conjunctivitis and corneal ulcers; and a host of bacteria- and virus-borne illnesses resulting from the entry of infectious microorganisms into the cat’s system.

Most severe among disorders associated with the feline nasal cavity are cancerous tumors that originate in the nasal cavity and are likely to cause extensive local obstruction and destruction. Some of these cancers respond well to radiation therapy if diagnosed and treated early. However, says Dr. Stone, other nasal cancers may be “relentlessly progressive.”

Noncancerous masses of tissue (polyps) may also develop on the surface tissue of the nasal passages. Although these growths can be removed by means of a relatively simple surgical procedure, they are often difficult to locate and remove because of the feline sinonasal structure’s small size. An additional threat to the nasal passages is the presence of foreign bodies, such as a blade of grass, that may become lodged in the cavity and interfere with an animal’s air intake.

Other frequently observed nasal disorders in cats, however, develop as the result of upper respiratory tract infections with one or both of two viruses — feline herpesvirus (FHV) and feline calicivirus (FCV). Sinonasal inflammation caused by these viruses usually subsides within a few days. However, the herpesvirus doesn’t disappear from an affected cat’s system. Instead, it takes up residence in the animal’s facial nerves and remains there in a dormant or latent state before reactivating repeatedly from time to time.

When the virus is reactivated, it may cause sneezing and a runny nose for a few days, but then goes back into the nerves and becomes dormant again. As for FCV, the initial infection destroys the cells that line a cat’s nasal passages, which may allow secondary infections to occur.

Other microorganisms that may infect the sinonasal structure include various bacteria, chlamydia, and certain fungi. To complicate matters, infection with the feline immunodeficiency virus (FIV) and feline leukemia virus (FeLV), although not directly associated with nasal disease, may compromise a cat’s immune system and thus make it more susceptible to other sinonasal infections.

Look for discharge
The most telling sign of a viral, bacterial or fungal infection of the nasal passages is persistent discharge from an affected cat’s nose and eyes. In the initial stage of infection, the discharge is clear and watery. But as the infection progresses, the fluid may carry increasing amounts of mucus and pus and may become thick, opaque and yellowish-green. And if an infectious organism has caused significant damage, some blood might be visible in the discharge because the capillaries are close to the mucosal surface. This purulent discharge can interfere with a cat’s ability to inhale, in response to which the affected animal may resort to uncomfortable and labored open-mouthed breathing.

“Any breed of cat is at risk for nasal disease,” Dr. Stone points out, “although an animal’s age may have an influence. Cancer, for example, tends to occur most frequently in older cats, while viral infections are more prevalent in younger animals. But even simple viral infections can cause damage if signs persist longer than a week or so and will predispose affected cats to recurrent nasal infections throughout life.”

Regarding the diagnosis of nasal disorders, he says: “The most common problems, such as viral or bacterial upper respiratory infections, can usually be diagnosed by noting the clinical signs. Animals that fail to respond to treatment for those infections or have other recurrent nasal problems may require more extensive diagnostic testing, possibly involving sedated sinonasal examination, CT scanning, and nasal culture biopsy.” Treatment, of course, will depend on the diagnosis, he adds.

What owners can do
Owners can play a valuable role in minimizing a cat’s risk for nasal passage problems, Dr. Stone advises. In addition to making sure that a cat is properly vaccinated against viral infections, he says, owners should be attentive to the clinical signs of such disorders. “Prompt treatment of nasal issues,” he says, “may decrease the risk of for future problems. Nasal discharge or stuffiness that persists for longer than about10 days should certainly be brought to the attention of a veterinarian.”— Tom Ewing