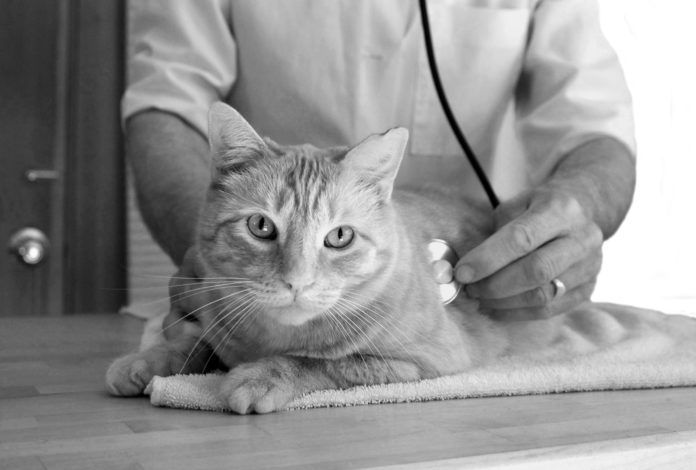 During the course of a routine physical examination, a veterinarian will use a stethoscope to listen carefully to the sound of a cat’s beating heart. What the veterinarian wants to hear is a gentle, steadily pulsating thump-thump, which would indicate that the animal is in good health, at least as far as her heart is concerned. What the veterinarian does not want to hear is a heart murmur—a rhythmic swishing sound that might be inconsequential but could also be a signal that the patient is afflicted with a potentially lethal cardiac disorder.

A murmur, explains John Rush, DVM, a professor of cardiology in the Cummings School’s Department of Clinical Sciences, is a sound created by the turbulent flow of blood either within one of the four chambers of the heart or within the arteries leading to or from the organ. A murmur can also be caused by vibrations emanating from the cardiac structure — the wall of the heart, for example, or one of the valves in the organ’s interior. “There are four valves inside the heart,” explains Dr. Rush, “and if any one of them is too narrow, the pressure needed to force the blood through it will cause turbulent blood flow, and this turbulence will produce the murmur.” Likewise, a leak in one of the valves can interfere with the proper flow of blood within the heart’s chambers, and this can result in murmur-producing turbulence as well.

“Heart murmurs are relatively common in cats,” says Dr. John Rush, “and when we detect one, we grade its severity on a scale from one to six, with six being the most serious.”

GRADE 1: “A swishing sound can be heard when listening with a stethoscope to the heart of a complacent cat for at least two minutes in a quiet room.”

GRADE 2: “You hear a very soft murmur right off the bat when you listen.”

GRADE 3: “You detect a medium-intensity murmur.”

GRADE 4: “You hear a loud murmur through the stethoscope.”

GRADE 5: “You detect what we call a ‘thrill’ — a murmur that is strong enough so that you can actually feel a vibration when you put your hand on the cat’s chest.”

GRADE 6: “You can hear the murmur without having the stethoscope on the cat’s chest.” A Grade 6 murmur is very uncommon in cats.

Although most feline heart murmurs are detected in mature cats, they are occasionally noticed in kittens and very young cats as well. Some newborn kittens may have what is termed an “innocent murmur” or “kitten murmur,” which will soon vanish as the animal matures. In such cases, says Dr. Rush, “The murmur can usually be picked up during a kitten’s first visit to the veterinarian at eight to 10 weeks of age or so when she’s taken in for her first round of vaccines.” At that point, the murmur will most often be of no consequence and will soon vanish.

“An innocent murmur will probably disappear by the time a cat is one year of age,” notes Dr. Rush. “It’s not associated with any cardiac problem — it’s just part of a cat’s growing up.” In rare cases, a heart murmur may become evident in a young cat as the result of a disorder that is not directly related to the heart, such as fever or anemia. And even then, the murmur is likely to disappear if the source of the cardiac irregularity is identified and successfully treated.

On the other hand, a murmur caused by congenital heart disease in a kitten or young cat, he says, will never simply disappear. In such cases, it is likely that the cat was born with a cardiac deformity of some sort— an improperly functioning valve, for example, or a hole in the heart. “The louder the murmur,” says Dr. Rush, “the greater the probability that it is associated with a congenital malformation.” Any such disorder, of course, would call for the prompt attention of a veterinary cardiologist.

A kitten with a congenital cardiac malformation — a severely defective valve, for example — might show no signs of disease whatsoever before suddenly expiring. However, depending on the seriousness of the condition, the animal may show signs of fluid around the lungs (pleural effusion) or fluid within the lungs (pulmonary edema) Other possibilities include such secondary conditions as thromboembolic disease — the development of blood clots that develop in the heart and are carried by the bloodstream to the aorta and to an animal’s limbs and other organs.

The outlook is particularly grim for a young cat with a congenital heart murmur that is untreated or medically unmanageable. The prognosis depends largely on the severity of the heart disease by the time a veterinarian sees the pet. In such a case, the chief indicator is the extent to which the heart has become enlarged as a result of the underlying condition. The kitten will either die from heart failure or from complications that may arise if blood clots start developing in the major organs.

In older cats, says Dr. Rush, murmurs almost always are a consequence of cardiomyopathy, a hereditary condition marked by a structural abnormality in the heart muscle, which either grows too thick or stretches and becomes too thin. In either case, the abnormality sets the organ’s blood-collecting and blood-pumping mechanics awry, a dysfunction that often leads to respiratory distress, paralysis-causing blood clots, congestive heart failure, and, in some cases, sudden death.

Although most frequently affecting male cats, cardiomyopathy often claims the lives of females as well. While occurring primarily in older animals, the disease can also strike young cats — even younger than six months of age. And although genetic predisposition for cardiomyopathy puts some breeds — Persians, Ragdolls, and Maine Coons, for example — at greater risk than others, no breed is immune to its threat.

The most common type of this disorder is hypertrophic cardiomyopathy, a condition that is diagnosed in 85 to 90 percent of feline cardiomyopathy cases. This disease is characterized by a thickening of the muscle tissue associated with the ventricles, which are the two largest chambers of the heart. This thickening results in poor heart function and the obstruction of blood flow from the heart.

Many veterinarians will assess a heart murmur according to six progressive levels of severity (see sidebar at left). But if a murmur at any level is detected in a cat of any age, a veterinarian will probably recommend that the animal undergo an echocardiogram. A blood test (called NT-proBNP) also may be useful in identifying cats that might have enough heart disease to warrant an echocardiogram.

However, Dr. Rush explains, “You never treat the murmur itself. It’s simply a sign that a cat might have heart disease, and it has to be the underlying disease that you treat.'”