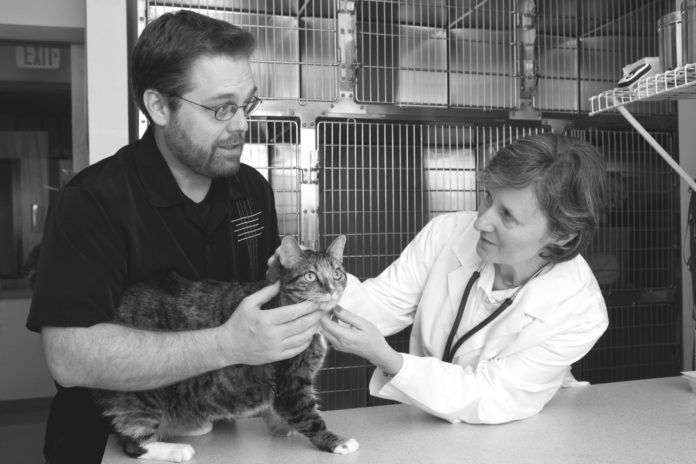 Just like humans and dogs, cats are also susceptible to glaucoma — an incurable condition in which the watery fluid contained in the front part of the eye is unable to drain normally. The resulting accumulation of this fluid exerts pressure within the entire eye, eventually causing permanent damage to the optic nerve, which connects the eye to the brain.

This damage inevitably interferes with normal vision and —even if diagnosed at an early stage — will almost inevitably result in partial or total blindness in an affected eye. There are two types of this serious eye disease — primary (or idiopathic) and secondary (acquired) — explains ophthalmologist Stefano Pizzirani, DVM, an assistant professor in the department of clinical sciences at Tufts.

Primary glaucoma is a relatively rare condition in cats that is genetically heritable. Certain feline breeds — such as Burmese, Siamese and Persians — are especially predisposed, although the condition can also affect domestic short-haired cats.

“Primary glaucoma,” says Dr. Pizzirani, “is typically a bilateral condition, eventually affecting both eyes. The signs of the disorder may not become apparent simultaneously; they may develop at different times during a cat’s life. In any case, a cat with this type of glaucoma will — if it lives long enough — be inevitably affected bilaterally. Early signs of the disease may not be clearly evident, because the pressure within the eye tends to increase slowly and gradually over time.”

Secondary Glaucoma: Most Common in Cats

The other form of the disorder — secondary glaucoma — is far more common, accounting for 95 percent or more of all feline glaucoma diagnoses. Secondary glaucoma, to which cats of all breeds are equally susceptible, can develop in one or both eyes, depending on the condition that generates the increased ocular pressure.

The disorder may manifest itself during different periods of a cat’s life. This type of glaucoma typically develops as a consequence of another eye disease, the most frequently diagnosed of which is uveitis — a severe eye inflammation that creates intraocular fibrosia (scarring) that blocks an eye’s normal drainage pathways. This allows the aqueous fluid within the eyeball to increase and eventually create excessive pressure within the eye. Uveitis most commonly occurs in cats that are middle-aged or older.

Interocular tumors make up another group of diseases that may cause secondary glaucoma in cats. The most commonly diagnosed among these is a cancerous growth that affects the iris — the colored tissue surrounding the pupil. In this disorder — called diffuse iris melanoma — the continuous thickening of the growth spreads to and obstructs the eye’s drainage system, thus interfering with the proper drainage of aqueous fluid. “In the case of bilateral uveitis,” says Dr. Pizzirani, “the resulting glaucoma is likely to be present in both eyes. If melanoma is the cause, the glaucoma will only be evident in the eye in which the cancer has developed.”

In addition to uveitis and melanoma, another possible cause of secondary feline glaucoma is lens luxation, in which the lens of a cat’s eye becomes detached and shifts into the front chamber of the eye, where it physically blocks the drainage of aqueous humor. Also, hemorrhagic or inflammatory consequences of ocular trauma can lead to the onset of glaucoma.

It is clear, says Dr. Pizzirani, that inborn genetic abnormalities put some breeds at elevated risk for primary glaucoma. As for secondary glaucoma, however, the risk factors have not yet been conclusively determined. “Age is known to increase the risk for humans and dogs, “but we don’t know whether this is true for cats,” explains Dr. Pizzirani. Likewise, he notes, while studies in humans and dogs indicate that females are twice as likely as males to experience primary glaucoma, this has yet to be scientifically established in cats.

Early Signs of Glaucoma in Cats

The clinical signs of feline glaucoma may be subtle and escape an owner’s notice until they have significantly advanced. Among these signs is progressive cloudiness in a cat’s eye or eyes; the white of the eye may become red around the cornea; and an affected eye may gradually enlarge, perhaps even bulge. Some cats may squint, and an affected eye may be “teary.” Over time, a cat that is experiencing loss of vision may seem to lose interest in his normal activities.

These signs usually become increasingly apparent to the owner over a period of weeks, months or even longer. The length of time it would take for a cat with glaucoma to go blind varies depending on the cause of the disorder.

“If you have acute secondary glaucoma with uveitis,” says Dr. Pizzirani, “vision can be lost within weeks. If a cat develops primary glaucoma, the pressure within the eye may increase slowly, and it may take months or years before there is a complete loss of vision. Some cats may actually preserve some vision even in advanced cases.”

Any obvious signs of visual impairment or changes in the appearance of a cat’s eye should be immediately brought to the attention of a veterinarian. In addition to a complete medical history of the cat, diagnosis will entail a thorough examination aimed at confirming or ruling out the presence of suspected glaucoma. “The examination will rely principally on the measurement of the pressure within the eyeball,” says Dr. Pizzirani, “since elevated intraocular pressure is the pivotal diagnostic finding that would yield a diagnosis of glaucoma.”

Measuring the intraocular pressure will typically involve the use of a tonometer — a device, he explains, that employs a small contact plate that is gently applied to the surface of the eye. If the pressure is higher than normal and is accompanied by vision loss, glaucoma will be the likely diagnosis. Further diagnostic procedures will, among other things, aim to determine whether the disorder is primary or acquired.

Although glaucoma is incurable, some of the disorder’s clinical signs — including the discomfort it causes — may be relieved by the use of eyedrops containing drugs that reduce intraocular pressure. Progressive vision loss may be delayed by treatment with medications that normalize eye pressure and treat inflammation. At home, owners will have to maintain a permanent schedule of administering special eyedrops about three times a day to help ease the cat’s discomfort. The owners should know, however, that feline glaucoma is an ultimately incurable condition that may call for the surgical removal of one or both of a cat’s eyes.

Glaucoma Surgery is Helpful to Cats

“In case the disease is unresponsive to medication,” says Dr. Pizzirani, “my strong suggestion would be to remove an eye that has become blind. I understand that this option may seem aggressive to some owners, especially in those cases where both of a cat’s eyes are affected. However, my experience suggests that cats that have had an eye — or both eyes — removed recover quickly and that their behavior improves. The senses of hearing and smell are very well developed in cats — more developed than their vision.

“Blind cats adapt very well to their usual home environment, and they can still have a good quality of life, without discomfort and without having to have a blind eye treated three times a day.”