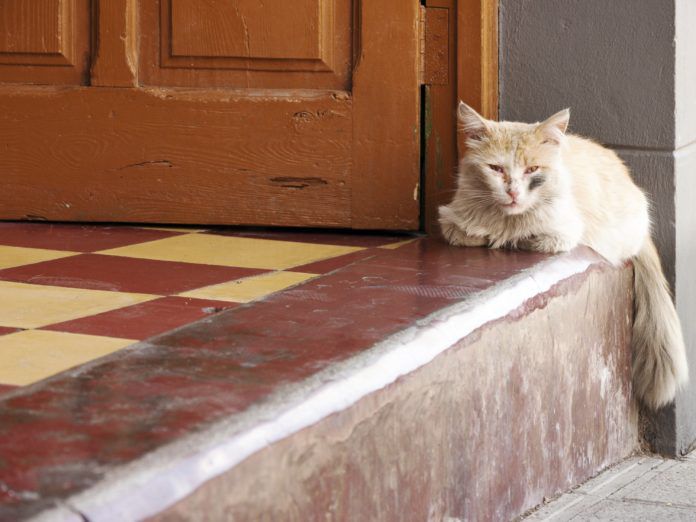 Cats become increasingly susceptible to age-related disease conditions as they grow old, and most of these disorders are bound to have an effect on their behavior. Arthritis, for example, is likely to cause a formerly rambunctious cat to slow down dramatically as he transitions through his so-called golden years; kidney and urinary tract disease may severely impact the animal’s litter box behavior; periodontal disease and tooth loss may alter his eating habits; and progressive hearing problems may make him decreasingly responsive to his environment.

In some cases, however, an elderly cat’s behavioral peculiarities will — despite a thorough veterinary examination and laboratory testing — remain unattributable to any specific underlying physical disease. In such a case, a cat may be diagnosed with feline cognitive dysfunction (FCD), a broad term used to describe a condition whose clinical signs resemble to an extent those associated with age-related dementia and Alzheimer’s disease in humans.

The disorder — the consequence of severe and irreversible loss of brain cells and brain atrophy — is not uncommon. In fact, one study has shown that as many as 80 percent of cats over the age of 16 show signs of the condition, with changes in their brains detected in post mortem examinations. Their brains often contain the same type of deposits (beta amyloid plaques) that are seen in the brains of humans with Alzheimer’s disease and senile dementia.

The clinical signs of FCD, which can become noticeable in cats as young as 10 years of age — or even earlier in rare cases — vary from animal to animal. “You start seeing the disorder with some frequency in 12-year-old cats,” explains Nicholas Dodman, BVMS, director of the Animal Behavior Clinic at Tufts. “You see it somewhat more frequently in cats that are 14 or 15 years old, and way more frequently at 16, 17 and 18. By the time they’re 20 years old — the equivalent of age 95 or 96 in humans — a lot of cats will have it.”

A definitive diagnosis of FCD can be obtained only by means of a post mortem examination of a cat’s brain. However, says Dr. Dodman, a probable diagnosis can be reached in a living animal by excluding possibly causative physical disorders — advanced kidney disease or hyperthyroidism, for example — and reviewing a cat’s behavioral patterns for signs represented by the acronym “DISHA.”

In this acronym, D stands for Disorientation; I for Interactions; S for Sleep cycle; H for House soiling; and A for Activity decline. Accordingly, Dr. Dodman describes the altered behavior of an FCD-afflicted cat as follows:

“The animal seems disoriented. He walks around the house apparently without purpose. He doesn’t go to a window to look outside, for example. He just wanders aimlessly.”

“The cat’s social interactions have undergone a change. He used to spend a lot of time sitting on his owner’s lap, purring, soliciting petting. Now he seems reclusive. He’s not very much interested in interacting with people, and he shuns the other cats in the household.”

“His sleep cycle has changed. During the night, when the cat used to sleep soundly, he wanders through the home, making miserable, ghostly sounds, which he has never done before. Over time, this behavior becomes more frequent — until it’s happening every night.”

“After a lifetime of appropriate litter box use, the cat starts having accidents around the house. You’re using the same box and the same litter, and the box is in the same place that it’s always been. There’s nothing medically wrong with the animal — he’s just disoriented. It seems that he’s lost his place — he doesn’t know where his bathroom is.”

“There’s a dramatic decrease in the cat’s physical activity. This is especially noticeable during the day, when he spends much more of his time sleeping.”

The emergence of these behavioral signs is typically gradual and subtle. “It usually takes time for the owner to realize that things are changing,” says Dr. Dodman. “Sleeping a lot during the day, for instance, may be dismissed as just something that happens normally as a cat ages. And if the cat is making these bizarre sounds during the night, you might think that he’s coughing up a hairball. It might take months before it occurs to you that these signs might be signaling the onset of cognitive decline.”

As soon as any of these telltale signs become apparent, a thorough veterinary examination is in order. The exam will initially focus on ruling out the presence of any disease condition that could possibly be responsible for an affected animal’s unusual behavior. “The exam will include a complete blood count, blood chemistry profile and urinalysis,” explains Dr. Dodman. “This is to make sure that the cat doesn’t have a urinary tract infection or a failing liver or kidney, which can produce confused behavior. When you’ve ruled out such physical disorders, you’re left with one conclusion: This could be a case of cognitive dysfunction.”

The tentative diagnosis will be confirmed by continually monitoring the cat’s behavior and noting each occurrence of the behavioral signs on a checklist. “If you find an increasing number of checkmarks over a period of three months and another increase at six months,” says Dr. Dodman, “this gradual worsening confirms the veterinarian’s diagnosis — and the condition will be progressive and irreversible.”

Since FCD is incurable, the only treatment option will aim to alleviate the condition’s manifestations. “We want to buy the cat some time,” Dr. Dodman says. “We want to push the clock back.” In that regard, he points out, the only medical treatment likely to be of any benefit is drug called Anipryl (selegiline hydrochloride), a medication designed to control the clinical signs associated with cognitive dysfunction in dogs, but which may also be used in cats.

“Typically,” he says, “a low dose of Anipryl will be given by mouth once a day. If no effect is apparent after a few weeks and no side effects have been seen, the dose should be gradually increased until treatment success is achieved or until side effects dictate against further dose increases.”

Researchers hypothesize that dietary components such as antioxidants, B vitamins and omega-3 fatty acids may help promote brain health. A commercial food containing these ingredients — Hill’s Prescription Diet b/d — is now available for dogs, although a similar product for cats has not yet come on the market. Nevertheless, ongoing research supports the hypothesis that brain function in middle-aged and older cats can be significantly improved by dietary supplementation with these ingredients.

However, Dr. Dodman warns cat owners against attempting to create their own diets without the guidance of a veterinary nutritionist. He advises: “If your cat seems to be bordering on or suffering from cognitive dysfunction, ask a veterinary nutritionist for suggestions on how to modify the animal’s diet to ensure an adequate supply of antioxidants and other ingredients that are important for brain health.”

Although FCD cannot be prevented, says Dr. Dodman, several measures can help to forestall onset of the disorder and the speed with which it progresses. “Your older cat should have plenty of exercise,” he advises, “which is good for his brain as well as his heart, lungs, joints and muscles. Don’t overfeed him, and avoid giving him high-calorie food and allowing him to become an overweight couch potato.

“You want a leaner, fitter cat, so get in the habit of taking the time to play with him, using a feather wand, a laser mouse or just a tennis ball. Do whatever you can to keep the cat’s brain and body active. This will go a long way in staving off the onset of cognitive dysfunction.” — Tom Ewing