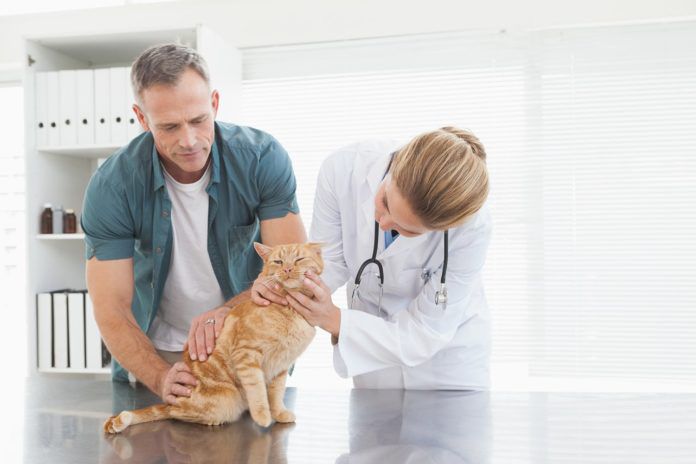 While maintaining her normal (and robust) appetite, your nine-year-old cat Pansy seemed to be getting a bit slimmer during the past month or so. This in itself might not have been a cause for concern.

In fact, it might be even be a good thing, since Pansy was getting to be a bit chubby and could afford to lose a pound or two. However, you also noticed that she’d been drinking large amounts of water lately and urinating with uncharacteristic frequency. So you made the smart decision to take her to your veterinarian for a checkup.

Common signs of diabetes
Lucky for her that you made this decision. According to Orla Mahony, an internal medicine specialist in the Department of Clinical Sciences at Tufts, excessive drinking (polydipsia) and correspondingly increased urination (polyuria), combined with noticeable weight loss, are among the clinical signs of diabetes mellitus, a common feline health disorder. That was the diagnosis in Pansy’s case, and the disease could have killed her if it had remained undiagnosed and untreated.

Diabetes, explains Dr. Mahony, is the result of a malfunctioning endocrine system, a group of mostly small glands that manufacture necessary chemicals called hormones and deliver them into the bloodstream. Once they reach their respective target destinations, the hormones interact with host tissue to enable countless bodily processes and make sure they are all functioning properly.

In cats as well as in dogs, humans and other mammals, the components of the endocrine system include the adrenal glands, the pancreas, the parathyroid glands, the pituitary gland, the hypothalamus gland and the thyroid glands. In addition, females have ovaries and males have testes, which facilitate and regulate reproductive processes.

In Pansy’s case, all of her glands seemed to be working fine except for the pancreas, a relatively tiny organ (about the size and shape of a small pickle) that is located near a cat’s stomach and her small intestine. The pancreas plays two important roles. One role — the exocrine function — is to generate digestive enzymes and deliver them into the gastrointestinal tract to enable the breakdown of nutrients. The organ’s other role — the endocrine function — carries out the crucially important task of manufacturing a hormone called insulin, which affects nutrients after they have been digested.

The role of insulin
Insulin is necessary due to the vital role it plays in metabolizing the carbohydrates, fats and proteins that are routinely consumed in a cat’s food. The hormone enables these dietary components, when digested, to be broken down into a chemical substance called glucose, which is the fuel that provides the energy needed to sustain life. Without glucose in its cells, any animal or human cannot survive.

Two types of diabetes
Diabetes mellitus results from an insufficient production of insulin by the pancreas. There are two kinds of diabetes: Type I and Type II.

In Type I diabetes, the body produces little or no insulin due to an insufficient number of cells capable of producing the vitally important hormone. Treatment for the condition entails a combination of controlled diet, and, in almost all cases, insulin therapy that requires daily injections of the hormone.

In Type II diabetes, the pancreas may produce insulin but the body’s cells have difficulty making efficient use of it — a phenomenon called insulin resistance, the most common cause of which is obesity. Another important cause of insulin resistance is acromegaly, a disorder caused by a growth hormone-secreting tumor of the pituitary gland that results in an affected animal’s abnormally large body, face, feet and other anatomical areas.

Most affected cats are thought to have Type II diabetes, says Dr. Mahony, and up to one-third of them may go into remission. That is, a cat may be diagnosed with the disease but then go through recurring periods when they do not require insulin support.

A combination of gradual weight loss, polydipsia and polyuria (increased drinking and urinating) most prominently suggest the presence of diabetes. It is unlikely that any other signs will be observed in the early stages of the disease. Cats of both genders are susceptible to diabetes, although Dr. Mahony notes that “several studies have shown a male predisposition — they seem to be a bit more insulin resistant than females. And neutered males seem to gain more weight than females.”

Regarding breed predilection, she points out that the condition can occur in any breed, although she adds that “Burmese cats, worldwide, are especially predisposed.” While diabetes can afflict cats of any age, says Dr. Mahony, “It’s a disease primarily of older cats — those over age 10 or so.”

And, she adds, the disorder is especially common in obese cats. A cat’s lifestyle may also increase susceptibility to diabetes, but only to the extent that indoor cats tend toward obesity more than those who spend most or all of their time outdoors. Overweight cats with diabetes tend to lose weight very gradually — over a period of months — despite the fact that they typically have a healthy appetite and continue to eat well.

Seek prompt treatment
Owners who notice the signs of diabetes in their cats should seek veterinary care as soon as possible, since a number of severe disorders may emerge if the condition is allowed to progress. One such condition is peripheral neuropathy, which results from diabetes-related nerve damage affecting an animal’s feet and legs. A cat with this condition is likely to show signs of weakness in her limbs, may drag her backside low to the ground, and may eventually refuse to stand on all fours.

Another condition, notes Dr. Mahony, is diabetic ketoacidosis, which is caused by excessively high levels of blood sugar and the consequent buildup of certain acids (ketones) in the blood. Signs include vomiting, loss of appetite and extreme weakness, and it is potentially fatal. Without the prompt infusion of fluids and insulin, an animal with this condition may go into a coma and die.

How diabetes is diagnosed
When diabetes is suspected, veterinary examination will aim to confirm that diagnosis and to rule out other possible causes for the typical clinical signs. The diagnostic procedure will involve a thorough medical history and physical exam; a urinalysis to check for the presence of glucose and ketones in the animal’s urine; a search for signs of possible urinary infection; blood tests to determine the concentration of blood glucose; and various procedures to exclude other possible conditions, such as hyperthyroidism. In some cases, abdominal X-rays or ultrasound imaging will be done to evaluate the health of the pancreas and other internal organs.

What treatment entails
Treatment for a confirmed case of feline diabetes, says Dr. Mahony, will always entail dietary therapy aimed toward maintaining a cat’s proper weight and minimizing the consumption of food that might increase blood glucose levels.

In addition, most, although not all, diabetic cats will require injections of insulin, administered once or twice a day by the animal’s owner into the scruff of the affected animal’s neck. (A cat will tolerate the injections very well, as long as the owner has been properly taught how to administer them by a veterinarian or veterinary technician.)

In most cases, a cat undergoing prompt treatment will begin to show improvement almost immediately, and the animal’s condition is apt to stabilize within a few weeks.

Dr. Mahony points out that between 10 percent and 30 percent of affected cats will “do well enough to stop receiving insulin shots. The majority will have to receive them for the rest of their lives. And even many of those cats who have gone into remission will eventually come out of it again and will have to receive insulin shots for the rest of their lives.” — Tom Ewing