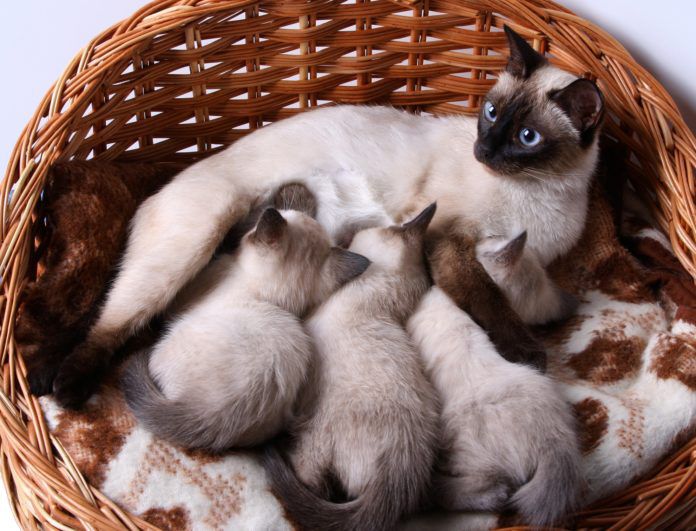 Polycystic Kidney Disease (PKD) — a serious illness characterized by the presence of cysts in the kidney and sometimes outright kidney failure — is a genetic disorder found in nearly two out of every five Persian cats (and many Himalayan cats, too). But because the majority of cats are not purebred, and mate randomly, it is also found throughout the general cat population. In other words, any house cat can carry the genetic trait. And it’s not just PDK making its way into the greater cat population.

“The majority of cats we see — as many as 95 percent — are random-bred cats or ‘alley’ cats, and all the genetic diseases that occur with high frequency in specific breeds can also be found in them,” says Jerold S. Bell, DVM, a veterinary geneticist at the Cummings School of Veterinary Medicine at Tufts University.

“Even though these cats aren’t purebreeds, we’re seeing the most common diseases in them,” explains Dr. Bell. “And we recognize — when they are presented for bladder disease, or diabetes, or vomiting and inflammatory disease, or gum disease — that these are genetic predispositions and will most likely appear in other cats again unless we take long-term measures.”

Dr. Bell suggests that these long-term measures should start with people who want a purebreed cat to educating themselves and asking the appropriate questions of breeders about genetic diseases seen in their breeding cats and — if genetic tests are available — their results. Otherwise, there will be no impetus for breeders to actually do the necessary testing.

“Pressure needs to be put on the cat breeding community so that it recognizes that the consumer is looking for responsible, health-conscious breeders,” says Dr. Bell. “It’s the only way healthy cats can be selected for breeding, and it is the responsibility of the breeders to choose to breed only healthy cats.”

Dr. Bell points out that the DNA tests, which only have to be performed once for any breeding cat or not-yet-tested kitten, cost between $35 and $65 — only a fraction of the amount breeders charge for purebred kittens. If such testing becomes the norm, purebreeds will stand a greater chance of leading a healthier life, as will random-bred cats that often mix with purebreeds. Owners, too, will benefit by not having to watch their cats suffer from preventable diseases that ultimately take an emotional and financial toll.

Because these diseases are genetic in nature, they are not contagious, and one cat in a household cannot infect another. However, environmental stressors — including living in a multi-cat household — can play a role in promoting some of these diseases. Consider, too, that obese, middle-age cats with a sedentary lifestyle seem to be more prone to developing certain genetic diseases. It’s important to make sure your cat gets plenty of play stimulation and an appropriate diet that is not too high in calories.

The most important feline diseases that are known or suspected to be heritable include:

Feline Urinary Tract Disease (FLUTD) can cause great distress for a cat. Though a cat with FLUTD may repeatedly visit his litterbox, only small amounts of urine — sometimes bloody — may be produced. The cat may void over the side of the litterbox, clean himself excessively and/or cry out in pain when urinating. Persian cats seem to be at greater risk, as well as mixed-breeds cats, while Siamese cats seem to be at a decreased risk.

Treatment consists of anti-inflammatory drugs to reduce the recurrence of bladder inflammation, and possibly behavior-modifying drugs to manage anxiety or depression. An appropriate diet may be needed, especially for cats prone to crystalluria, or abnormal mineral crystals in the urine.

Diabetes Mellitus (TYPE II) in cats is much like type 2 diabetes in people, with increased fatigue, increased thirst and accompanying weight loss. There is also a greater output of urine. Though the disease is more often found in random-bred cats, there does seem to be a greater incidence in Burmese cats, as well as some Siamese, Norwegian Forest, Abyssinian and Russian Blue cats. Obesity would appear to be a factor in the disease’s development, and one study has also found a mutation in a particular gene in cats that is similar to a mutated gene in humans.

Lymphocytic or Plasmacytic Inflammatory Disease has not yet been connected to specific genetic mutations in cats, but appears more often in Siamese and Asian breeds, as well as mixed-breed cats. The disease manifests as gingivostomatitis (gum disease) or inflammatory bowel disease.

The symptoms of gingivostomatitis include hunger with weight loss due to oral pain made obvious by pawing at the mouth, production of excessive and perhaps bloody saliva, and ulcerated, swollen or bleeding gums. Inflammatory Bowel Disease (IBD) leads to abdominal pain, weight loss, fatigue, and indicators of gastrointestinal upset such as flatulence, rumbling sounds from the abdomen, diarrhea and vomiting.

Polycystic Kidney Disease (PKD), as described earlier, can be tested for with a PKD test on the parents or kittens. You can even request to do the test yourself, swabbing the inner cheek of the parents or kitten you are interested in and then sending the sample in for testing at a lab. The average age of onset of PKD is seven, and while it can lead to full kidney failure, it can also involve the development of cysts that do not seem to interfere with renal function.

Hypertrophic Cardiomyopathy (HCM) is caused by a genetic mutation found in 33 percent of Maine Coon cats, leading to possible heart failure or sudden death as early as six months of age to seven years old. Cats who inherit the mutated gene from both parents may develop the disease earlier, and with greater consequences, than those who carry only one parent’s mutated gene.

Twenty percent of affected Ragdolls carry a different mutation in the same gene as Maine coons. Surprisingly, some Maine Coons and Ragdoll cats develop HCM though they do not have the mutations that typically occur in their breed. This also happens with random-bred cats and individual cats from other breeds.

Sphynx breed cats may develop the disease around two years of age. Other cats that have the disease, but with various genetic influences, include Bengal, Birman, Chartreux and Persian breeds. All cats affected with HCM must be treated on a continual basis to prevent heart failure. — Constance Lindner