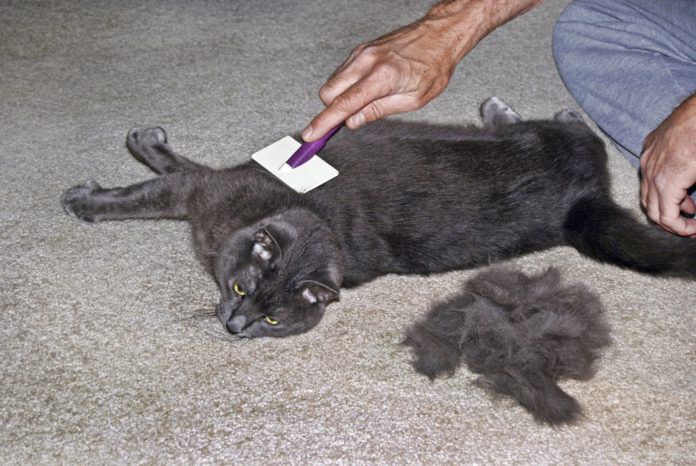 Help for a cat with hairballs

QI have a five-year-old female longhaired cat who I adopted from the local humane society about two years ago. Recently, she has been having hairballs almost on a daily basis.

I have been giving her Laxatone daily, and I brush her constantly. She also seems as though she has problems digesting her food. I am not able to feed her any type of chunky food — only shredded is tolerated. Her veterinarian was not able to find any medical problems with her, other than the hairballs.

Do you have any suggestions for me? At this rate, the carpeting in my new home will be ruined before long, and I am obviously concerned about her health. Any advice you can offer would be appreciated.

ADear Diane: It seems like you’re already doing the proper things to help minimize hairballs, so I’m not sure how helpful my answer is going to be. Hairballs are a common occurrence, especially in a longhaired cat like yours.

Cats are fanatical groomers, and the little barbs on their tongues pull off excess hair, which they swallow. Much of the hair passes through the digestive tract and ends up in the stool, but some hair will accumulate in the stomach. Once the hairball reaches a critical size, it triggers the cat to vomit it up. Although hairballs are mostly an annoyance, there have been cases where they’ve grown large enough to cause a dangerous obstruction.

There are several things you can do to minimize the hairball problem — but be aware that no single remedy will help all cats. Success is ultimately achieved by trial and error. First and foremost, you will need to brush your cat on a regular basis. Some cats love being brushed and fussed over. For those who dislike being brushed, stroking the cat gently while wearing nub-covered grooming gloves might be a good alternative. Some longhaired cats may need to be shaved down by a professional groomer.

Brushing alone is rarely enough, however. From your letter, I see that you’re also using Laxatone, which is an intestinal lubricant. The use of these lubricants is usually the second step in helping to keep hairballs under control. Most cats seem to like the taste of the lubricant, and consider it a treat. In most cases, brushing and lubricants alone solve the problem.

For stubborn cases, however, a specially formulated “hairball diet” may be warranted. These diets are high in fiber, and help control hairballs in most situations. Bear in mind that the goal is not to eliminate hairballs completely. (Honestly, that’s often not possible.) A realistic goal is to reduce the frequency and severity of the problem by using a combination of brushing, shaving, lubricants and hairball diets.

QI have been sponsoring a cat at a purebred rescue facility who is FIV-positive (feline immunodeficiency virus). I have two cats who are elderly (12 and 14 years old), but healthy. I’ve been told that if I adopt my sponsored cat, my own cats won’t be affected by this disease — unless they receive a deep bite wound. Is this true?

Also, what can I expect as the FIV-positive cat ages, if I bring him home and assume full care for him? If the worst happens and one of my healthy cats is bitten, how long does it take for the symptoms to manifest? I would like to adopt this cat, but I want to be fully prepared to do what’s best for him and my other two cats.

ADear Susan: Feline immunodeficiency virus (FIV) is part of a family of viruses called lentiviruses and is common worldwide. In the United States, the seroprevalence in cats at a high risk of exposure and in clinically ill cats ranges from four to 24 percent.

In natural settings, transmission of the virus is primarily by inoculation of virus present in saliva or blood presumably from a bite wound. Horizontal transmission of FIV in a multi-cat household is an infrequent event. A recent study determined that FIV-positive and FIV-negative cats seem to be able to live together harmoniously without the disease being transmitted among the group members. If transmission does occur in a multi-cat household, it is most likely caused by fighting and bite wounds.

Clinical signs of FIV infection are nonspecific and include: fever, dermatitis, stomatitis, weight loss, emaciation, respiratory tract infections, chronic diarrhea, abscesses and even neurological signs. Clinical signs attributed directly to FIV infection likely go unobserved in many cases because they can be mild and explained by other disease processes.

The acute phase of illness may last several days to several weeks, and may just be lethargy or evidence of another type of infection such as an upper respiratory tract infection. After the acute phase, the majority of cats will enter a phase in which they appear healthy. This phase may last for years.

During the later stages of infection, clinical signs are often a reflection of opportunistic infections, neoplasia, bone marrow suppression and neurologic disease. Infections with a significant number of opportunistic pathogens such as viral, bacterial, protozoal and fungal have been reported. In the terminal phase of infection, a wasting syndrome may occur.

In many naturally-infected cats, FIV does not directly cause a severe clinical disease. With proper care, FIV-infected cats can live many years with a high quality of life, and may die in older age from causes unrelated to FIV infection. The strategy to prolong life is to keep the FIV-infected cat as a strictly indoor cat. Secondary infections cause clinical signs in FIV-infected cats, can influence the clinical course and also play a role in the progression of disease.

So, unless there is a lot of fighting, it is not your resident older cats who are at risk. In fact, it is the newly adopted FIV-infected cat who may be exposed to pathogens carried by your established cats. For example, if one of your cats were to have chronic herpes virus upper respiratory tract infections, the FIV-infected cat may not be able to fight off infection with this virus.

Plan to introduce the cats gradually so that the risk of fighting is decreased. Make sure that all the cats stay indoors and that you keep your other two healthy cats up to date on vaccinations.