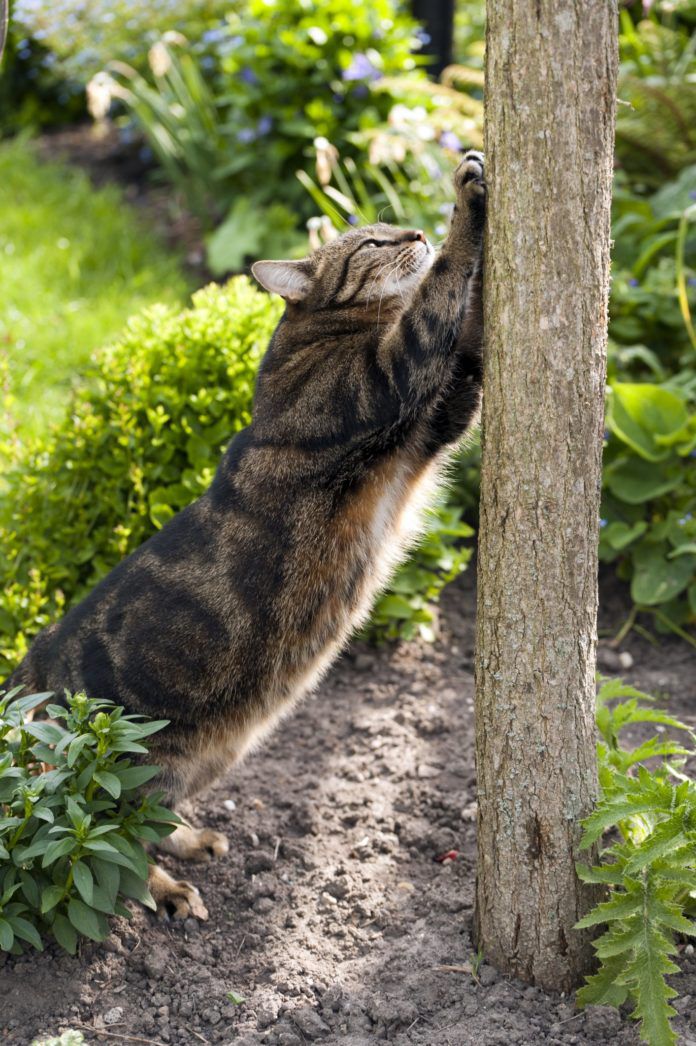 Feline claws were designed by nature to serve many purposes. They enable a cat to scale a tree trunk, for example, or to maintain her grip on a slender branch, or to seize prey. An outdoor cat will use her claws to conceal her scent from predators by scratching dirt over a spot where she has urinated or defecated. Even an indoor cat who doesn’t rely on her claws for hunting and climbing will devote time each day to keeping them clean and in good condition.

This is a valuable instinct, since diseases can potentially compromise the physical health and utility of any cat’s claws — and some of these conditions can have significant systemic implications. “Although claw problems are not among the most common feline disorders that we treat,” says Lluis Ferrer, DVM, a professor of veterinary dermatology at Tufts, “they have to be addressed promptly when they do occur.”

A cat’s claws are epidermal structures comparable in makeup to human fingernails and toenails. That is, they are made of a tough, insoluble protein (keratin) and covered by a thin sheath consisting of dead keratin. Running through the center of each claw is a light pink area called the “quick,” which harbors the claw’s blood supply.

The nails grow out of thick, hairless pads — five on the front paws and four on the rear paws in a normal cat. Feline claws differ significantly from the nails of humans and other carnivores in that a cat can project and draw them back in at will.

When the cat is relaxed, her claws are in their retracted position, snugly enclosed within the paws and held there by tough elastic bands of tissue (dorsal ligaments). When, for whatever reason, the cat wants to put her claws to use, she extends them from her claw bed by employing a muscle called the deep digital flexor, which is strong enough to overpower the resistance of the dorsal ligament’s elasticity.

And when the claws have served their purpose, she relaxes this powerful muscle and the claws immediately retract within the paws.

A cat’s frequent scratching behavior — whether carried out on a post designed for that purpose or on an owner’s brand-new living room carpet — is typically aimed at keeping these various components in good condition. The scratching scrapes away outer layers of the claws to keep them sharp; it enables a cat to exercise the extending and retracting muscles and ligaments; and it strengthens her legs and shoulders.

Signs of issues with a cat’s claws

The signs indicating that a cat is experiencing a claw problem are variable, according to Dr. Ferrer. “In some cases,” he says, “the owner will notice only that the cat is being unusually quiet and inactive. There will be no obvious physical signs. In other cases, the cat may be limping or constantly licking her paws, and the owner will notice that the animal’s toe or nailbed is inflamed, swollen, and clearly causing pain — that some sort of trauma has occurred.”

Diseases that can effect the claws and their associated tissues, include bacterial, viral and fungal infections; traumatic injury; immune system disorders and tumors. Both male and female cats of all breeds are at similar risk, although some disorders may be diagnosed more frequently in certain breeds than in others.

Medical terms for nail and nailbed disorders often include the prefix onycho — the Greek word for nail. Examples are onychomalacia (softening of the nails); onychorrhexis (brittle nails); onychodystrophy (the deformity of a nail); and onychectomy (surgical removal of a cat’s claws). In some cases, the Greek root is embedded within the name of a claw abnormality; trachyonychia, for example, is a condition marked by the presence of rough-surfaced nails.

The most commonly observed disorder associated with feline claws, Dr. Ferrer points out, is paronychia, an inflammatory disease affecting the skin of the nailbeds that, in cats, is usually caused by a bacterial infection. Usually affecting only one or two claws, this infection will cause the nailbed to become inflamed and painful. Most often, pus will be present in the nailbed, and the nail itself will gradually become thick and brown in color. Paronychia can usually be treated effectively with an antibiotic.

If the disorder persists, however, it is possible that a fungal infection is also present. For example, feline dermatophytosis — commonly referred to as “ringworm” — can cause fungal infections in an animal’s nails and nailbeds.

Among all of the feline claw-associated disorders, notes Dr. Ferrer, the most severe is pemphigus foliaceus — an autoimmune disease characterized by the production of antibodies that attack the tissues in an animal’s nails and nailbeds as well as her skin, resulting in widespread pustules and open sores that are vulnerable to serious bacterial infection. This serious disorder may prove fatal if not treated promptly by a veterinarian.

Many feline claw problems are the consequence of trauma to the nail and nailbed from chemical or thermal burns and frostbite. These are typically easily recognized, and are usually managed by bandaging, or occasionally, surgery.

A cat’s owners can play an important role, says Dr. Ferrer, in reducing an animal’s chances of experiencing a disorder associated with her nails or nailbeds. “When you’re doing your routine, overall grooming of your cat,” he advises, “make sure to pay special attention to her claws. Sometimes, they’re not easy to see, so take the entire paw in your hand and press it gently to reveal the nails. This will enable you to examine it carefully for any dirt or any discharge, which could be a sign of infection.”

When you need to clip your cat’s nails

You don’t have to clip the cat’s nails routinely — cats usually take care of that by themselves. But you should do this if they’ve grown too long. If you can hear the animal’s paws clicking on the floor when she walks around the house, you know it’s time to clip her nails. Keep in mind that there are blood vessels in the nails, so don’t clip them too short — just trim the ends. If you have questions about the best and safest way to do it, you can ask a technician at your veterinarian’s office for a demonstration.

As for scratching posts, he says: “They’re a good way for the cat to use her claws and exercise the muscles in her legs. Some cats like these posts a lot and use them routinely, but other cats just ignore them.”

When should you suspect that your cat is experiencing a problem with one or more of her paws? “The most useful sign is when the animal pays constant attention to a paw or a nail, licking it and the area around it. If the area is inflamed, the cat will probably start limping — and if there is serious inflammation, she may avoid walking altogether. If this occurs, it’s certainly time to visit your veterinarian.”