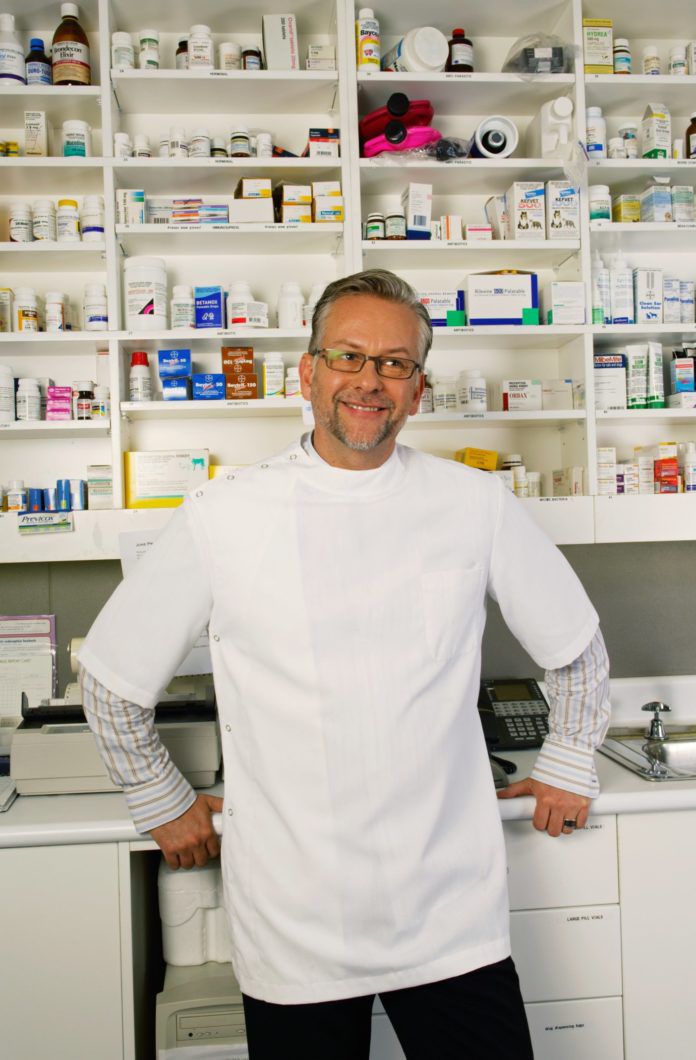 Your older cat seems like he’s in pain. He doesn’t limp or moan, but you notice that he won’t jump up on his favorite windowsill the way that he used to, and if you put him there, he’s reluctant to jump down on his own. He has trouble walking up and down stairs. He’s not playful any more.

Your veterinarian has diagnosed him with degenerative joint disease (DJD) — essentially, arthritis. If it was you with arthritis, you would probably take an over the counter painkiller or a prescription non-steroidal anti-inflammatory drug (NSAID). Are there similar options available for your cat’s chronic pain?

The answer: surprisingly few. “No one markets any chronic pain medication for cats in the U.S.,” says pain medicine specialist Alicia M. Karas DVM, MS, DACVA, an assistant professor at Tufts University Cummings School of Veterinary Medicine. “There are several NSAIDS approved for dogs for chronic pain, but none for cats.”

Even so, there are ways to relieve your cat’s pain with medication. There are several options, even if they are not officially approved; your vet may be able to prescribe medications “off-label,” that is, for uses other than the official ones. Says Dr. Karas, “NSAIDS are a particularly challenging class of pain medications for cats, and if they are used off label, it must be done very carefully, with informed consent.”

Cats Are Good at Hiding Pain

Why has medication for chronic pain in cats been slow to become available? “People didn’t used to think cats had real problems with chronic pain,” explains Dr. Karas. “Cats are good at hiding it.” Luckily, that perception is now changing with new approaches to diagnosing pain — and a growing population of cats, which means there are more older cats getting chronically painful diseases like arthritis. Other common causes of chronic pain: old traumatic injuries, dental disease, inflammatory bowel disease, diabetes and cancer.

One reason for caution is that cats “are notoriously poor at processing or metabolizing drugs,” explains Dr. Karas. It’s biology: Cats are carnivores, so they didn’t develop the enzymes needed to detoxify the many chemicals in the plant world. Two NSAIDS, Metacam (active ingredient: meloxicam) and Onsior (active ingredient: robenacoxib) are FDA approved for very short term use for post-operative pain in cats, and are very effective. The manufacturer of Metacam indicates that off-label use in cats is not recommended because of a risk of acute kidney failure.

While NSAIDS should generally not be used in cats with kidney disease, some experts believe they can be used to treat chronic feline pain under careful veterinary supervision. In Europe and Canada, both drugs are approved for longer-term oral use. However, since no NSAIDS are approved for long term use in the U.S., a vet who prescribed them would be doing so “off-label.” Some oncologists will also recommend NSAID therapy for cats with certain types of cancer to slow its growth.

Since new “black box” warnings were put on the U.S. version of Metacam, many vets who were using it off-label have stopped doing so. However, Dr. Karas believes “there may be reasons why it’s sometimes appropriate to prescribe an NSAID for a cat with chronic pain. The current literature indicates that NSAIDS can be used safely long term in cats on a case-by-case basis at appropriate doses. But again, it should only be done with the approval and supervision of your veterinarian.”

Other Pain Medication Options for Cats

Because long-term NSAID use in cats is controversial, many veterinarians turn to other kinds of medications to treat chronic pain. These include:

Gabapentin, an anti-epileptic (anti-seizure) medication, which is often prescribed for chronic pain in cats, especially neurological pain that occurs in cancer and diabetes.

Amantadine, an anti-viral drug with painkiller properties, “can be used in conjunction with NSAIDS in dogs,” says Dr. Karas. “I use it in cats as well.”

Amitriptyline, an older type of antidepressant, originally developed for people, is sometimes used to treat chronic pain in cats. (It is also used for behavioral issues, such as separation anxiety.)

Tramadol, a synthetic opioid, “has both opioid-like and anti-depressant activity,” says Dr. Karas. “It is a pretty safe medication, but it’s very hard to get into cats, because it tastes really bad.” It may cause the cat to have hallucinations as well. Use is generally very short term, “just a couple of days,” she adds.

Opioids “may also be used in managing chronic pain in cats,” says Dr. Karas, “but it is the last thing I would reach for.” They can cause behavioral problems, lack of appetite and constipation, and stopping abruptly may cause withdrawal symptoms.

Whatever pain medication your vet prescribes, risk can be minimized by using the lowest dose possible, and monitoring your cat for signs of toxicity. Watch out for “vomiting, diarrhea, lack of appetite, or increased thirst or urination,” says Dr. Karas. And obviously contact your veterinarian immediately if you notice any of these signs.

In cats as in people, there’s more to managing pain than medication. If your cat has arthritis, losing weight may help. “The more weight your cat carries, the worse it is for pain,” says Dr. Karas. Modify the environment to make it easier for your cat: Make sure the litter box is easy to get in and out of, perhaps with a ramp, and make sure food and water is accessible. (If you used to feed your cat on top of the washing machine, but your cat is reluctant to jump now, find an easier spot.) “Do things to encourage activity,” says Dr. Karas. Talk to your vet about supplements such as glucosamine and fish oils. Acupuncture can also help.

As for NSAID medications, says Dr. Karas, “I make sure the cat owner understands the risks, which include gastric ulceration, as well as kidney or liver toxicity. The risk isn’t huge, but it’s there.” The complexity of pain management in cats is one reason to find a vet with experience. “There are quite a few vets who keep current about feline medicine these days,” says Dr. Karas. “I would find someone who has a particular interest in cats, who participates in continuing education about diagnosing and prescribing for chronic pain in cats.”

On the plus side, proper medication can sometimes have dramatic benefits. “We’re talking about pain that is with her from the moment she wakes up, that makes it hard for a cat to sleep,” says Dr. Karas. “I’ve seen miraculous transformation, with the cat playing, greeting you at the door.” If that happens, she says, it’s pretty clear that your cat was in severe pain — and medication helped. “There’s nothing better than seeing your cat play again.”