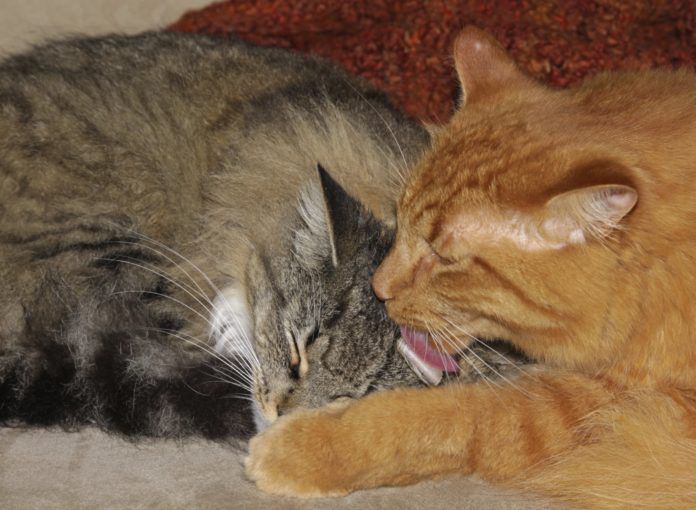 According to a new study published in The Veterinary Journal, FIV-positive and FIV-negative cats seem to be able to live together harmoniously without the disease being transmitted among the group members.

Written by Dr. Annette Litster, BVSc, PhD, FACVSc, assistant professor of Small Animal Internal Medicine and Director of Maddie’s Shelter Medicine at Perdue University, the conclusions are based on her research on the cohabitation of cats living in separate shelter facilities. These cats shared the same bowls, litter boxes and bedding —and even engaged in mutual grooming and occasional episodes of mild aggression.

The Feline Immunodeficiency Virus (FIV) is a cat-only disease that cannot be transmitted to humans or other animals, and it is a slow virus that affects the immune system over a period of years. Some cats are able to fight off the infection and become totally immune, others can become carriers that never get sick, while others will end up with a compromised immune system.

Unfortunately, a lot of misinformation and fear surrounds this disease. Even though there are many FIV-positive cats that are able to live long, healthy lives, there are still many experts who recommend euthanizing those cats who test positive for the disease.

The reason that FIV is not easily passed between cats is that it cannot be spread casually through litter boxes, food and water bowls, or even through grooming, snuggling and playing. The only way that this disease is transferred is when an infected cat bites another cat — and breaks the other cat’s skin. A neutered cat living in a multi-cat home is highly unlikely to infect any other cats as long as they are properly introduced or are not particularly aggressive in nature.

FIV is much more difficult to transmit than people are led to believe — and, additionally, there is often confusion between FIV and FeLV. The Feline Leukemia Virus (FeLV) is transferred from one cat to another through saliva, blood, and even urine and feces. The virus does not live long outside the cat’s body — probably just a few hours. Grooming and fighting seem to be the most common ways for infection to spread. And kittens can contract the disease in utero or through an infected mother’s milk.

Dr. Litster’s studies — coupled with the further understanding of exactly how FIV is transmitted — demonstrate why it is no longer appropriate to automatically assume that FIV positive cats can’t live together with their fellow uninfected cats. The vast majority of cats, once neutered, have no desire to bite the other cats they live with. They may play fight — but this rarely leads to a serious bite, which is what would be required to inject the virus.

Dr. Litster hopes that this new research will help veterinarians and shelter staff to advise cat owners and adopters to make more informed decisions, and in turn help put an end to FIV positive cats being needlessly euthanized due to a controllable and non-threatening illness.

New research suggests that dog owners are more dominant than cat owners, according to a study conducted by the University of Melbourne in Australia. The study found that those people who are more partial to dogs are also more competitive and scored higher in social dominance orientation (SDO) — an attribute that is associated with a tendency to expect, accept and endorse social inequality.

Some people believe that our preference for certain pets is derived from our personalities — that we are drawn to creatures that resonate with our way of thinking and acting. Therefore, to cat lovers, dogs can seem emotionally needy, always working hard for affection. On the other hand, people who prefer dogs often view cats as arrogant and selfish, with no concept of depending on others.

Compared to cat lovers, those who prefer dogs may be more competitive and inclined to dominate. This correlates with a relationship between man and dog that does rely on social hierarchy — dogs are perceived as devoted and loyal, and they are also fairly easily trained. Ultimately, their obedience and desire to follow orders (and please their owners) create a distinct line of authority between man and dog.

Of the 500 people who participated in the study, the self-professed cat lovers scored lower in their desire to dominate. This suggests that dog owners are more comfortable when they play the superior role within a relationship.

In May, veterinary surgeons at the University of Georgia Veterinary Teaching Hospital successfully performed a kidney transplant in a cat, using stem cells harvested from the patient to optimize the cat’s acceptance of the new kidney. This is the second successful surgery of its kind performed at the hospital.

“We used feline adult stem cells in one other transplant that we did last year,” explained Dr. Schmiedt, who noted a growing body of studies detailing the successful use of adult stem cells in human renal transplants. “A study published in 2012 found the use of MSCs during renal transplant surgery in humans lowered the risk of acute organ rejection, decreased the risk of infection, and the patients had better estimated renal function one year after surgery.”

The first cat to receive mesenchymal stem cells during a kidney transplant at UGA’s Veterinary Teaching Hospital is doing well a year after the surgery.

Arthur’s new kidney was donated by a cat named Joey, who was part of a research program in the College of Veterinary Medicine. A requirement of the feline transplant program at the UGA Veterinary Teaching Hospital is that the donor cat be adopted by the recipient cat’s family — so Joey is now a part of Arthur’s family.

“Cat owners who seek kidney transplants for their sick cats have to be very dedicated,” emphasized Dr. Schmiedt. “They will give their cat medication twice a day for the rest of its life. They also must be willing to take their cats to the veterinarian for frequent medical checkups — a significant amount of time and expense is involved in keeping the recipient and donor cats healthy. But cat lovers who will go to this extent typically are willing to extend this kind of care to all cats they own.”