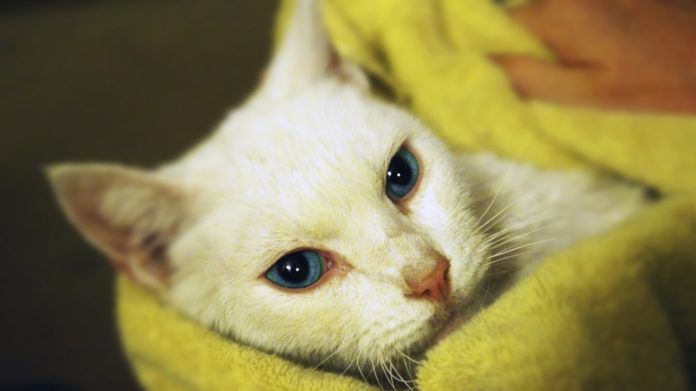 Whether a cat is quietly resting, playing happily with one of her toys or trying to escape from a malevolent predator, all of her activities rely on the well-controlled transmission, or firing, of electrical signals among the billions of nerve cells (neurons) that are packed within her brain.

In a normal cat, the transmission of these signals is governed by the central nervous system, which determines whether the neurons fire or are inhibited from doing so according to her various needs and desires. Unfortunately, this complex process goes awry in an estimated one percent or so of the general feline population. And when this occurs, a cat may experience a disturbing phenomenon broadly referred to as a seizure.

A typical seizure will last somewhere between 30 and 90 seconds, according to Dr. Arnold Plotnick, DVM, owner of Manhattan Cat Specialists, a feline-exclusive veterinary hospital in New York City. “A seizure is usually characterized,” he says, “by rhythmic contraction and relaxation of the animal’s body. Most cats lose consciousness, and some may involuntarily urinate or defecate.”

During the seizure, the cat’s lips will be pulled back, and her teeth may be chattering. Eventually, the trauma will pass. The animal’s muscles will relax, and her behavior and appearance will return to normal. In some cases, the seizure will take another form, less startling but no less puzzling. The cat will suddenly go from acting normally to behaving in a robot-like manner, staring straight ahead and pacing in large circles. For a minute or two, the animal will not respond to her owner — and then she will abruptly snap out of the trance.

A seizure that lasts for several minutes or more and involves loss of consciousness and involuntary muscle contractions throughout a cat’s entire body is called a grand mal seizure. Less serious is a petit mal seizure, which is of comparatively short duration and is characterized by vague, aimless, trancelike behavior. Seizures can also be categorized as either partial or generalized.

“A partial seizure,” explains Dr. Plotnick, “is one that stems from one particular spot in the brain, and you may see a sign of that, such as a twitching leg. But this may then spread to the rest of the brain and cause other problems throughout the body. We would call this a generalized seizure, and we see these far more often than partial seizures.”

Most important, perhaps, is the distinction that veterinarians recognize between idiopathic and symptomatic seizures. In simple terms, an idiopathic (or primary) seizure is one that occurs for no discernible reason; there is an electrical abnormality in the brain, but its source — or cause — cannot be determined. Such an event is typically referred to as an epileptic seizure.

A symptomatic seizure, on the other hand, is one that occurs as a result of a diagnosable disorder in a cat’s brain or elsewhere in her body. Most common among the various possible disorders that can cause seizures, notes Dr. Plotnick, are low blood sugar levels and liver disease.

The phases of a seizure

A typical seizure will comprise three phases: aura, ictus and postictal. “In the aura phase,” says Dr. Plotnick, “a cat will have a vague feeling that a seizure is coming on. Gradually she knows that it’s about to happen.” In this phase, which can persist for an indefinite period, the animal is likely to be restless, will shake, and may either go into hiding or seek the company and comfort of her owner.

In the ictus (from the Latin word for “hit” or “strike”) phase, the seizure occurs and may persist for several seconds or minutes. During this phase, the cat is likely to fall on her side, salivate and paddle her feet.

In the post-ictal phase — after the seizure has stopped — the cat will simply appear disoriented and may wander aimlessly. “The animal will act spacey or dazed,” Dr. Plotnick notes. “She may recover completely within 10 minutes or so, although some cats may feel weird and out of sorts for several hours.”

Any seizure whose ictal phase lasts for more than a few minutes, he advises, should be considered an emergency situation that requires prompt veterinary attention. The same holds true if a cat experiences more than one seizure during a 24-hour period.

There is no evidence that epilepsy is more common in some breeds than in others, and males and females of any age appear to be similarly vulnerable. While both indoor and outdoor cats are equally at risk for idiopathic seizures, outdoor cats may be at elevated risk for secondary epilepsy due to their increased exposure to infectious agents and their greater vulnerability to head injuries.

At a veterinary clinic, says Dr. Plotnick, any cat that has experienced a seizure will undergo a thorough physical exam beginning with a complete blood count and blood chemistry analysis. “First of all, we want to rule out any possible metabolic causes,” he explains, “such as low calcium or blood sugar or liver disease. If we can rule out some of these systemic illnesses, then we’ll turn our attention to possible neurologic causes, for which we’ll do a CT or MRI scan and also analyze the cat’s cerebrospinal fluid for the presence of white blood cells or infectious agents. If we are unable to identify a specific cause for the seizures and then offer appropriate treatment, we’ll conclude that we’re dealing with idiopathic epilepsy.”

“Assuming that the epilepsy has a neurologic cause and we can’t identify the specific cause,” Dr. Plotnick says, “we might decide to use anti-convulsant therapy.” For that, he says, the drug of choice would be phenobarbital, a sedative and muscle relaxant. “Most cats respond well to it,” he points out, “and we usually have success with that medication.”

Although an animal may experience mild side effects from phenobarbital, such as excessive eating, drinking and urinating during the first few weeks of taking it, the prognosis, he says, is generally pretty good for epileptic cats taking that medication.

The seizures usually become much less frequent and less severe. If they persist, the phenobarbital will have to be continued permanently. But if the seizures disappear for a few years, the animal may be gradually weaned off the drug. “If the phenobarbital doesn’t control the seizures adequately,” says Dr. Plotnick, “we might add valium to it. And if that combination doesn’t succeed, there are newer anti-seizure drugs — Keppra and Zonegran, for example — that seem to work well in cats.”

Owners should keep in mind that seizures, in themselves, are rarely life-threatening. However, warns Dr. Plotnick, “if your cat has a seizure in an inopportune place — up on a tree branch or at the top of a stairway, for instance — she can go tumbling down and bang her skull or chip some teeth.”

While it is difficult to anticipate the onset of a seizure — and therefore challenging to protect an animal from such an occurrence — there are some steps that an owner can take to minimize an affected cat’s discomfort while an attack is in progress.

Most important, he advises: “Try to calm the cat down. Take a towel and gently swaddle her in it. This can sometimes shorten the duration of a seizure. But don’t try to keep the animal from swallowing her tongue by putting your hand anywhere near her mouth. The cat is very likely to chomp down, and this can really cause serious damage to your hand and fingers.” — Tom Ewing