You try everything to keep your cat calm and agreeable during her trips to the vet. You leave out her travel carrier all the time so she’s used to it, and you keep soft blankets, toys, and treats in there so she won’t freak out when it’s time to bring her to the car. You take her to a caring veterinarian who has set up a feline waiting area apart from dogs and lets her walk around the exam room before trying to get close to her. The doctor also makes sure the staff treats her gently, gives her treats for compliance, and uses soothing, quiet words of reassurance as she is poked and prodded. But still, she responds like a cat out of hell, flailing and acting aggressively in her fear. What’s next?

In a study conducted by veterinarians in France and published in the Journal of the American Veterinary Medical Association, dozens of cats who were known to exhibit fear-based aggression at the doctor’s office (growling, hissing, swatting, scratching, biting) were observed during two separate veterinary visits. Two hours before one of those visits, they were administered either 100 or 200 milligrams of gabapentin by their owners depending on their weight (with cats weighing at least 15.4 pounds getting the higher dose). Before the other visit, they were given a placebo. Neither the owners nor the veterinarians knew which cat was being given which treatment. But the results were remarkably consistent.

When the cats received gabapentin, their owners awarded them lower overall scores for stress during trips to the vet and also during exams. Similarly, the vets rated the cats as significantly more cooperative. In fact, the median score for cats examined after being given gabapentin was the highest it could be: 9. Almost 80 percent of the cats did better. As all of these cats previously needed special handling with puncture-resistant gloves, towel wrapping, restraint cages, or even anesthesia, it was a remarkable outcome. For cats examined without gabapentin, on the other hand, the median score was a 0.5 For one in five of the cats, examination was possible only when they had been medicated.

A common side effect of the medication was drowsiness, particularly for smaller cats. Some cats also exhibited impaired coordination, excess salivation, and vomiting, but all side effects had resolved within 10 hours. They were of little enough concern that the researchers were quite pleased overall about the stress reduction during the car rides to the doctor’s office and the decrease in aggression coupled with the increase in cooperation during the veterinary examinations. They posited further that the side effects were acceptable, given that veterinary visits generally only occur once or twice a year.

This is not the first study to indicate that gabapentin works to decrease feline stress. In previous research, feral cats confined for the purpose of spaying and neutering before being returned to their outdoor environments had lower stress scores than similar cats who received a placebo. Similarly, in yet another research trial, healthy cats who had previously shown signs of stress or fractious behavior during veterinary examinations were calmer on their way to the doctor’s office and during their veterinary examinations.

Getting your cat to take the gabapentin

As anyone with a cat knows, it is not always easy to get your pet to swallow medication. The good news here: gabapentin does not have a strong taste and can be given in liquid form, which makes administration much less of a challenge. Some liquid forms of gabapentin contain the sweetener xylitol. While that substance is toxic for dogs, it does not cause serious problems for cats. 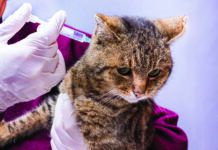 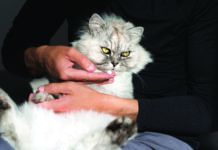 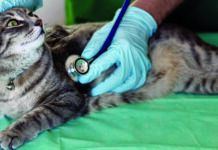