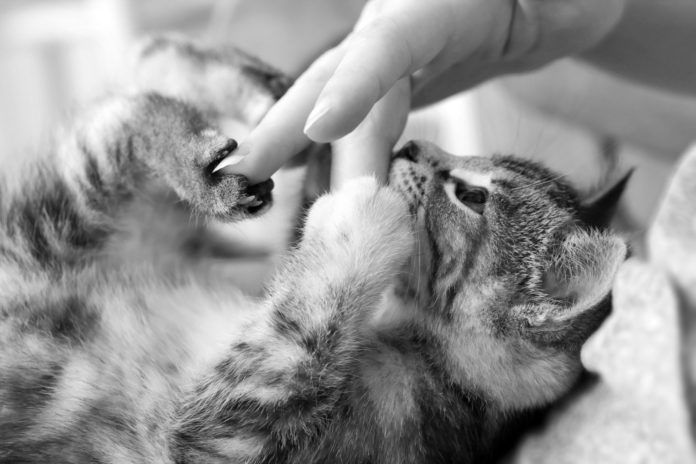 Petey, a much-loved, six-month-old kitten, has been able to hold his own in a family that includes two active boys and two dogs. Petey’s owner, Mindy, was a long-time dog owner; Petey, adopted at just seven weeks of age, was her first cat.

One morning, little Petey purred and squeaked in delight as Mindy played with him — rolling him over on his back, and letting him grip her forearm as she stroked his tummy. But when Mindy picked up the kitten and drew him up to her face, Petey lunged, and chomped down on her upper lip, hard.

In general, cats don’t attack without provocation — but aggression triggers can be so subtle that they’re often not noticed in time to prevent an attack. Aggression, a normal feline reaction to territorial intrusion, fear and overstimulation, is the second most common problem reported to cat behaviorists.

The shock and pain of the bite focused Mindy’s attention, and she made two wise decisions: She visited an Urgent Care Center to have the bite treated (fortunately, it bled freely and didn’t become infected), and took Petey to his veterinarian. After declaring Petey perfectly healthy, the veterinarian gave Mindy a referral to a cat behaviorist.

Guided by the behaviorist, Mindy realized that her kitten had become increasingly rambunctious and aggressive. The whole family — especially the two youngsters — had been playing quite roughly with Petey, rolling him over on his back with their hands, and allowing him to grip their forearms, biting and kicking. Petey had also started chasing, stalking, ambushing from above, pants-leg-climbing and mounting other surprise attacks against human family members. They had accepted this as normal kittenish play, and they even encouraged it — until the bite.

What is playful aggression?

For kittens — tiny predators-in-training — playtime is serious business: It’s hunting practice. Under their mother’s supervision, littermates refine their innate stalking and pouncing skills and learn to effectively deliver a killing bite. At the same time, they learn to inhibit their bites when it’s all in fun. Adopted at only seven weeks, Petey’s supervised hunting practice had been cut short, and he had likely not learned proper bite inhibition.

That may have perfectly set the stage for Mindy’s surprise bite, says Dr. Nicholas Dodman, director of the Animal Behavior Clinic at the Tufts Cummings School of Veterinary Medicine, and author of The Cat Who Cried for Help.

According to Dr. Dodman, seven weeks is the absolute minimum a kitten should remain with his mother and littermates. Petey probably never fully absorbed the lesson that there’s a difference between play-hunting and the real thing. Then, the rambunctious play sessions he enjoyed with his new family taught him that ambushes, aggressive play and biting were perfectly acceptable, and that human hands, arms and faces were acceptable toys.

When a kitten is small, “attacks” can seem cute. But as he grows, attacks on humans — even when playfully intended — can have serious consequences (see sidebar on page 11 on cat bites). Cats, though relatively small, are extremely strong, quick, agile and well-armed. While few owners will tolerate a truly aggressive cat, too many owners make the same mistake Mindy and her family did. Early recognition of the problem, and prompt intervention, are key.

Nipping it in the bud

At the first sign of aggressive play, stop the activity altogether. Get up and quietly leave the area. Teach the cat that when scratching, biting or other aggressive behavior starts, the fun’s over.

Never, ever, allow a kitten or cat to use human body parts as toys. Cats adore playing with their humans, and interactive play is both fun and healthy. But keep your distance. Entice your cat to exercise his predatory drive against “fishing pole” toys such as the “Feline Fisher” or “Da Bird.”

Recognize signs of impending aggression. According to Dr. Dodman, “Enlarged pupils, piloerection (that puffed-out, spiky fur look), flattened ears, a rapidly lashing tail, spitting or hissing, snarling, yowling, or a low, guttural growl are all signs that your cat is becoming dangerously overstimulated and potentially aggressive.”

Among other common mistakes, Mindy realized that because her family was more familiar with canine body language, they had been misinterpreting Petey’s lashing tail as a playful gesture — as opposed to the serious warning it actually was.

One thing you should never do when your cat attacks is physically punish him, emphasizes Dr. Dodman. By increasing the cat’s fear, anxiety and uncertainty, punishment makes a bad situation worse.

What is petting aggression?

When a cat rolls over on his back, exposing his tummy, it probably looks like an invitation. Most cats like having their tummies stroked — right up until the second they don’t. Many owners are shocked when their cat, who had just been purring in enjoyment, is suddenly gripping their forearm with needle-sharp claws, or even sinking in teeth. This can be confusing, not to mention painful.

With cats, their motto is: “trust, but verify.” A cat on his back may seem trusting — but he also has all his weapons facing you, at the ready. Before you try to pet any cat’s tummy, be sure you know that cat very well. Then, go ahead and give in to his invitation, but keep a very close watch on his body language.

Cat tummies are extremely sensitive, and the line between pleasure and overstimulation is quite narrow. At the first hint of overstimulation, stop the petting and calmly back off.

Most feline aggression is defensive. A sense of control over what’s happening in his immediate environment is extremely important to a cat. When scratches and bites happen, it’s usually because the cat was startled, cornered, handled roughly, or grabbed unexpectedly, and suddenly felt that he was in danger or not in control of his environment. Common sense cat-handling protocols will help you avoid defensive attacks.

Cats have innate predatory responses to certain kinds of prey-like sounds and movements. Recognize the types of movements that are most likely to trigger a cat’s “stalk, ambush, pounce” response: movement across his field of vision; movement away from him; rapid, jerky movement; sudden bursts of movement; and movement accompanied by interesting rustling, cracking or squeaking sounds. High-pitched, squeaky cries (such as both prey animals and young children make) can trigger attacks.

Your cat is sitting on a windowsill or by the door, looking outside. He’s hissing or growling. Meaning to calm and soothe him, you reach out to stroke him or even pick him up — only to be rewarded with a flurry of biting teeth and slashing claws. Why does your cat suddenly hate you?

Your cat doesn’t hate you; it’s more of a case of being in the wrong place at the wrong time. Your cat probably saw another cat outdoors, and unable to defend his turf by chasing the other cat off, turned his territorial aggression towards the nearest handy target – you. What to do? Block his view of the intruder; then quietly leave the area and let him calm down.

Besides remaining sensitive to his body language, take steps to minimize the chance that random environmental factors will set your cat off: Speak to your neighbor about his wandering cat, or install fences or devices to repel strange cats.

Most aggression in cats is strictly behavioral. But in rare cases, pain or illness can trigger attacks. If aggression appears suddenly or is unusually violent, seek veterinary help. Pain (such as dental pain or arthritis), hyperthyroidism, complex partial seizures and other neurological conditions can cause aggression, says Dr. Dodman.

Cats are basically peaceful, almost always choosing flight over fight. If a cat sees any avenue of escape from a threatening or uncertain situation, he’ll almost always take the way out. Here are some additional tips for avoiding feline aggression:

Avoid contact with unknown cats, especially feral cats. Usually, they’ll avoid you, because ferals are usually frightened and wary of humans. But if they feel cornered or threatened, they may lash out regardless of your best intentions.

Avoid confrontations with frightened or overstimulated cats. Unless the cat is in imminent danger, retreat and wait for a better time to pick him up or move him.

Never try to break up a cat fight by picking up one of the cats — even if it’s a cat you know well. Instead, toss a blanket over one of the cats, or toss a glass of water or a pillow at the combatants. If the fight is outdoors, turn the garden hose on them.

When transporting your cat to the veterinarian, use a secure carrier designed specifically for cats.

Closely supervise all interactions between young children and cats. Be ready to step in and distract child, cat or both if either seems to be stressed or behaving inappropriately.

Petey’s surprise attack taught Mindy and her family some important lessons about feline behavior. Petey now enjoys daily interactive play (he adores his Feline Fisher) and is growing into a still-playful but much calmer cat. The family now knows how to deflect his aggressive impulses while encouraging his natural playfulness, a winning outcome for everyone involved.— Wendy Christensen