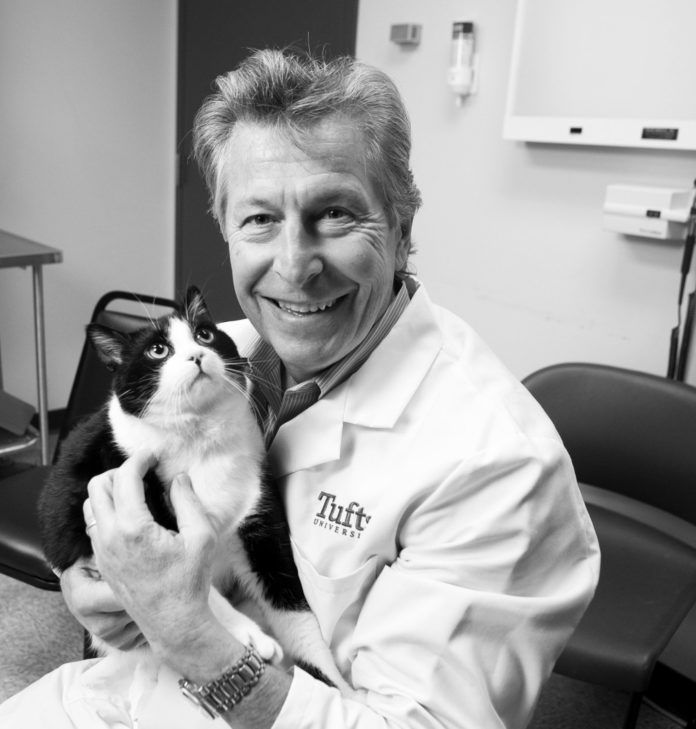 Many years ago, a cat was brought to me who was severely mutilating her tail. The self-directed attacks occurred in bouts in which the cat seemed transformed, possessed, manic and focused on fleeing from or viciously attacking a terrifying enemy-from-behind — her own tail.

The cat’s owner, Patricia Calida, arrived at my behavior clinic with not only the cat named Katie Kat, but with graphic videotape of her cat’s destructive behavior. In the video, Katie Kat, a slight in build, grey-and-white cat with a shortened stump of a fluffy tail, sat hunkered down on Calida’s kitchen floor growling under her breath. The growling intensified and then Katie Kat sprang up as if stung by a bee, ran wildly around the kitchen, stopping momentarily to glance over her shoulder and eventually laid into her tail as if her life depended on it. The cycle repeated itself a few times culminating only when Katie Kat leapt at the camera lens and the video suddenly went blank.

Calida explained that though Katie Kat had been showing a less intense version of this behavior for years, it had worsened recently. In fact, a few weeks earlier, she came home to find the kitchen walls daubed with blood and Katie Kat licking her hemorrhaging, now slightly shorter tail. The local veterinarian sutured the frayed end of her tail and recommended a visit to Cummings to find out what was going on.

Determining the cause
At that time, I was still not sure whether feline tail chasing was an extreme aggressive form of compulsive behavior, a true psychosis (like schizophrenia) or a partial seizure disorder. My modus operandi was to treat such cases as if they were a compulsive behavior first and then add an anticonvulsant should that be necessary. Some cats responded to anti-obsessional medication, like Prozac, while others responded to anticonvulsants, so the response to treatment was not useful retrospectively in substantiating the diagnosis.

Nowadays, I am inclined to think of extreme feline tail chasing and tail biting as a partial seizure disorder and regard it as a subset of the so-called feline hyperesthesia syndrome (FHS). The classical form of FHS involves bouts of bizarre behavior in which cats suddenly appear surprised or fearful, their pupils dilate widely, the skin along the back “ripples” and they engage in frenetic self-directed grooming along their spine. Stroking the cat can initiate a bout — hence the term “hyperesthesia” (literally, heightened feeling).

However, there are other versions of FHS, some involving affected cats running away from some unseen enemy, others apparently hallucinating (seeing things coming out of left field — I call this the “little green men in spaceships syndrome”) and a few progressing from any of the above into grand mal (tonic clonic) seizures. Add to this frenetic grooming of the tail head or tail itself and then running away from or biting the tail and you catch my drift. Specifically, I think this whole syndrome of FHS is a seizure-related problem with partial electrical conflagrations at least initially occurring in a discrete area of the brain responsible for fight/or flight and affective aggression (for those in the know, I would say the hypothalamus).

I treated Katie Kat with Prozac and the result was spectacular. I am not exaggerating when I say that within a few weeks, Katie Kat was acting completely normally, back to her old loving self, and the self-mutilation attacks occurred no more.

Somehow news of this successful treatment reached an ABC-TV station, which asked if we would both mind being interviewed for a piece on the news. Their fascination was with the fact that an animal, any animal, had been treated with Prozac. Calida and I agreed to be filmed. When it finally aired several days later, we were both able to see Katie Kat before and after treatment as Calida extolled the virtues of therapy and how it had saved her cat’s life. But TV being what is, they had to have counterpoint, so they interviewed another veterinarian on his views about Prozac. “Well, I would not use it,” he said. “For one, it is new and trendy, and it’s also very expensive.” He happened to be wrong on both points but who was counting?

Effectiveness of Prozac
I have seen many other cats like Katie Kat since that time, some tail chasing and some self-mutilating. I still start out with Prozac as my first line treatment, even though I regard the problem as seizure-based. The reason is that it often works and, a little-known fact, Prozac has some anti-epileptic (anti-seizure) effects as under certain circumstances, it actually raises the seizure threshold.

But anticonvulsants often work, too. One owner from California emailed me to say that his cat had FHS, but for some reason could not take Prozac. I suggested that he ask his veterinarian to prescribe a standard anticonvulsant, Keppra™, and requested that he recontact me to report the result. He kept to his word and the word was good — his cat was cured, too.

In the future, we plan to do EEGs on some of these cats to find out for sure whether affected cats’ brain waves are funky. Luckily, we have a very sophisticated quantitative EEG which we hope will be the tie breaker. I will be sure to report back on our findings, but until we find out more, tail chasing/biting by cats and its link (or not) with FHS will remain an enigma. And thereby hangs a tail, you could say.