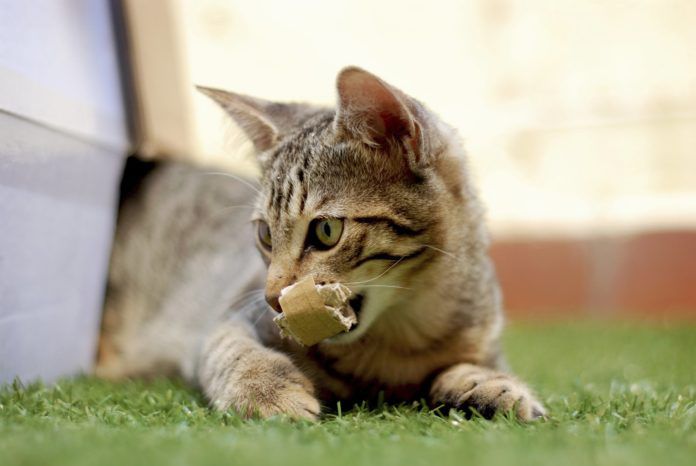 Q My nine-year-old neutered male domestic shorthair has arthritis, but is healthy otherwise. A few months ago, he developed a case of ringworm near the base of his tail. I treated it with a topical medication recommended by my veterinarian and it went away.

What are the odds of this biting being a psychological problem? I ask that because we have treated him with a dose of Program and have switched to a hypoallergenic diet — and he still bites. Should I be seeking the advice of a cat behaviorist?

A Dear Carol: I like that you used the term, “What are the odds of this being…” because I cannot absolutely diagnose your pet’s problem through the mail. However, I would bet that your cat is suffering from a dermatologic condition, most likely an allergic reaction to flea bites.

Flea allergy dermatitis is the most common cause of excessive licking and hair loss over the rump of cats. When a flea bites, it leaves a small amount of saliva in the skin. Cats may manifest varying degrees of allergic reaction to the saliva, with some cats being so sensitive that just one bite can make them itch over their rump for two solid weeks!

Q I have had my two cats since they were just a few days old. They were bottle-fed until they could eat regular food. They are now close to two years old. One is obsessed with rubber bands, while the other chews any shoe that has a soft sole. And both like to chew cardboard boxes.

To try to break this habit, my veterinarian suggested giving them dog chew bones and crunchy food. Neither worked. They still chew on inappropriate objects. Do you think this behavior is because they were not properly weaned? Any advice?

A Dear Linda: The problems you’re experiencing with your cats are a result of them being orphaned and hand-raised via baby bottles. The constant suckling drive they possessed in the first few weeks of life couldn’t be directed toward their mother’s milk for sustenance and comfort.

Instead, their suckling drive was redirected onto inedible things like clothing, boxes and even rubber bands. Some people call this behavior pica — which literally means depraved appetite — but, actually, it is probably more appropriately called a substrate-specific eating disorder as cats with this problem can be quite fussy about what they chew or ingest.

One way that I have dealt with this problem is to transition affected cats onto free-choice feeding of high-fiber rations. In some cases, when cats have access to high-fiber food, their quest for inedible objects disappears. You can consult with your veterinarian for his or her dietary recommendations.

That said, this technique does not always meet with success, and sometimes it is necessary to resort to treating seriously affected cats with anti-obsession medication, such as Prozac.

When you consider that some cats develop intestinal obstructions and can become very ill or die as a result of ingesting rubber bands or other non-edible items, this latter measure can literally be life saving. You should speak with your veterinarian about this option. Because of the danger, you should take special precautionary measures to make sure your cats don’t have access to these items.

Q We have a seven-year-old gray cat named Giuliani, who is positive for feline leukemia (FeLV). Giuliani has carried his head down for about two months now. His front legs are stiff and angled forward, and he walks stiff-legged. In addition, his tail twitches a lot and it appears as though he is spraying, but he is not.

His stool is usually soft and he keeps himself clean most of the time. Giuliani will awaken and take a few steps before lying down as though he is rapidly going to sleep. Giuliani can raise his head only slightly, but seems to compensate by raising his eyes. At times, Giuliani will keep his eyes open with little blinking. He cries out at times, but we don’t know if it is pain or not. There is muscle atrophy around his neck and scapula.

Our veterinarians performed a neurological exam. Chest X-rays have shown a “slightly” enlarged heart, but no sign of cancer. A complete blood count and chemistry panel (including potassium) were normal. Orthopedic X-rays were also normal. He has had chronic respiratory problems since we brought him home.

Initially, they suspected myasthenia gravis, but the acetylcholine receptor antibody test and an edrophonium test were inconclusive. Because Giuliani likes to jump up on tables and race up the stairs, the vets stressed that we should try to keep him as quiet as possible — with little to no exercise — in case his heart is the problem.

The veterinary specialists at a university determined that Giuliani’s problem is due to a neurological disorder, but we have heard them mention “enlarged heart” at least three times, as well. We feel a cardiac ultrasound needs to be performed because the next set of tests the university staff wants to perform include an electromyogram, nerve conduction study plus muscle biopsy. Giuliani will have to be anesthetized for these tests, and we don’t want to risk this if his problem is heart-related. What’s your opinion on this?

A Dear Cesar and Connie: First, you must be complimented for taking such good care of Guiliani! You describe a complex set of signs, with no obvious cause being determined after extensive testing by your regular veterinarian. After that, you sought referral to a university veterinary hospital.

It is obvious that you want Guiliani to get better — and you have gone to great lengths to make this happen. Unfortunately, the exact diagnosis has eluded his veterinarians thus far and more extensive diagnostics are still needed. I bet you are frustrated, as are the veterinarians on the case.

From your letter, I concur with the diagnostic steps taken so far. The only error of communication seems to be that several times you were told your pet’s heart was enlarged, yet no one has offered further diagnostics towards heart disease. From your description, I would agree that heart disease is not likely to be causing Guiliani’s weakness.

Almost invariably, when heart disease causes weakness in cats, obvious changes are present on plain radiographs that allow us to zero in on the heart as the cause of the problem. When radiographic changes are absent, it is pretty certain that heart disease is not causing weakness.

However, there is no reason that Guiliani cannot have two problems: neurological weakness and concurrent, but unrelated heart disease. As you are aware, heart disease could cause complications with anesthesia. So I would recommend that you continue the workup as recommended, while politely stating that you would feel more comfortable if your pet’s heart was evaluated more thoroughly before anesthesia.

Tell your veterinarian that you are concerned about the enlarged heart seen on radiographs and would like a veterinary cardiologist to check him over. Rest assured that a board-certified cardiologist would do a very thorough evaluation. However, I do believe that heart disease would be unlikely to cause the signs you have described. You should continue diagnostics to determine the cause of his neurological disorder.