Home Ask the Doctor Dear Doctor: Sidling up to people who are allergic to them
Print
Email
Facebook
Twitter

Q. You often hear people who are allergic to felines saying that when they go to the home of someone who has a cat, the cat won’t leave them alone and keeps coming over to them and rubbing against them. Why do cats want to make contact with the very people who are allergic to them when so often, those who want to be around cats can’t get their attention? Is there something in the scent of an allergic person that draws cats’ attention?

A. It’s not a biological response having to do with the scent of allergic people but, rather, a behavioral one. Cats like to be in charge of interactions with people. They’d generally prefer to initiate a physical greeting rather than be on the receiving end of one. Thus, they’re particularly likely to be drawn to those who show no interest. They feel relaxed around such people because they won’t have to be fending off attention from them that they weren’t interested in getting. That makes them more inclined to “introduce themselves.”

Cat lovers who seek interaction with cats too eagerly, on the other hand, will send cats scurrying. “Whoa,” the cat is thinking. “I suggested that we could glance at each other from across the room. No one said anything about approaching, let alone touching. That’s a call I’d prefer to make if and when I’m ready, once I sufficiently size you up and decide you’re safe to approach.” 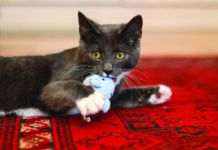