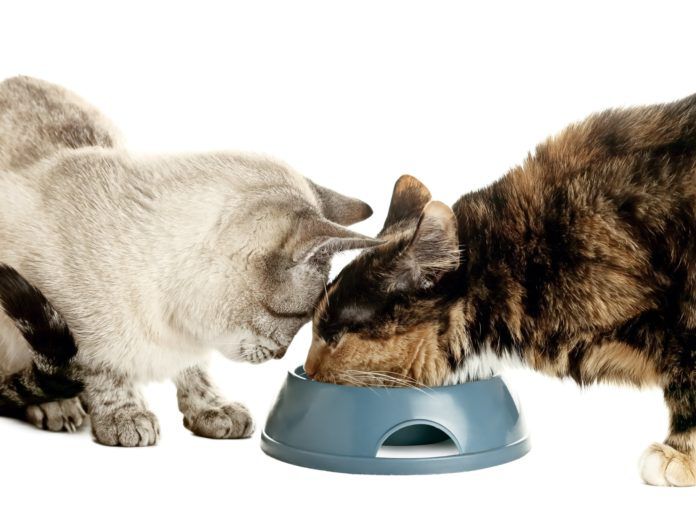 Q We recently adopted a two-year-old male cat, and he’s been a delightful addition to our household (we have two resident cats that we raised from kittenhood). Bentley lived at some point as a homeless cat — maybe abandoned, no one knows for sure. But a kindly person noticed him in a feral colony where he was fed for about a month (and he was clearly not a feral stray), and then she set about finding him a proper home.

Here’s the problem: He scarfs down his meals like there is no tomorrow. Our other two cats are more leisurely in their approach to mealtime, eating a little bit here and there and leaving some for later. But not Bentley! I tried to see how much he would eat in one day (during the time he was kept separate from the others, before the true introduction) — and there is not a morsel of food he will refuse.

His health is good (he was neutered and vaccinated shortly before we adopted him). Is this a behavioral issue that was caused by his living on the city streets? And how can we be sure that the three cats get equal opportunity at mealtime? My husband and I have busy schedules, and would prefer to find a logical and somewhat convenient way to approach this problem (and not make feeding them separately a part-time job in itself!). Any advice is much appreciated.

A Dear Donna: A lot of animals — cats included — have had a difficult time finding enough to eat when living in a feral community-type setting and after adoption become ravenous when they are presented with a decent meal. It’s as if they have to scarf down all the food as fast as possible to avoid having others share in their windfall. Even when alone, they don’t want to take any chances. In my experience, the almost depraved feeding frenzies that their inner panic creates take about a year to dissipate. It takes that long for them to learn that there’s more where that came from.

Of course, it is also possible that your new addition has some medical issue contributing to the gourmand nature of his ingestive behavior. Diabetes and hyperthyroidism are two conditions that cause polyphagia (increased appetite) and should be ruled out by your vet before jumping to my more purely behavioral explanation.