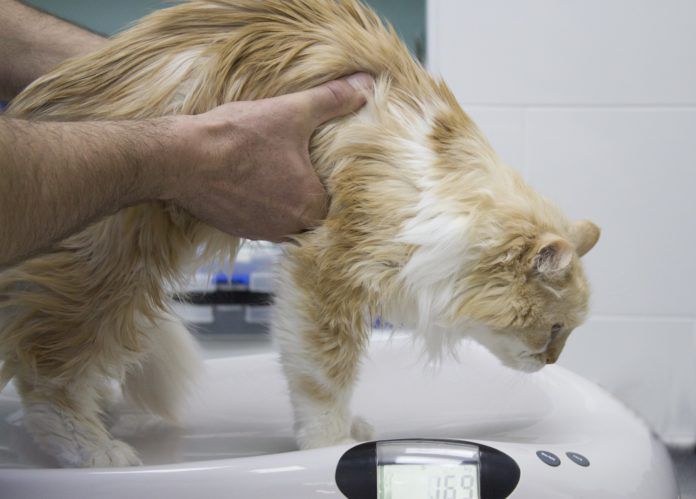 Although obesity is a major and persistent feline health problem, with an estimated 40 percent or more of cats living in U.S. homes significantly or grossly overweight, owners should also be aware of the many and frequently severe hazards associated with its opposite: significant weight loss over a brief period of time. According to Michael Stone, DVM, a faculty member in small animal medicine at Tufts: “Unexplained weight loss should always be considered a potentially serious health problem, and when it is observed, veterinary attention should be sought promptly.”

What most cats weigh

Healthy house cats typically weigh between eight and 12 pounds, notes Dr. Stone, with males normally weighing a pound or two more than their female counterparts. Significant variation in normal weight exists, however, among various breeds and between genders.

An adult female Siamese cat, for example, will normally weigh from five to seven pounds, while a male of that breed will usually weigh between eight and 10 pounds. Meanwhile, mature male Maine Coons often tip the scales at well over 20 pounds. In any case, says Dr. Stone, the body weight of most cats, once they have reached maturity, doesn’t fluctuate noticeably, either up or down.

To a great extent, an owner can evaluate the body condition of a cat by simply looking at the animal and feeling her torso. A cat of normal, proper weight will appear solid and muscular; her spine and ribs, although not visible, will be easily felt; her waist, when viewed from above, can be seen; and her abdomen, when viewed from the side, will not sag. The spine and ribs of an underweight cat, on the other hand, will be clearly visible; the animal, when viewed from above, will have an easily discernible abdominal “tuck”; and she’ll have a generally skinny appearance.

In cases of extreme weight loss, a cat’s spine can be clearly observed from a distance; she will have no apparent body fat; and she’ll appear, overall, to be bony and emaciated. And abnormally underweight cats can be recognized by the prominence of their ribs, explains Dr. Stone.

Get on that scale!

Of course, the simplest and most reliable method to determine whether a cat is becoming too skinny is to weigh your cat regularly; you should do this once a month or so, using an ordinary bathroom scale. While holding the cat, weigh yourself and then repeat the process but without holding the animal. The difference between the two weights will reveal the cat’s weight.

“Weighing your cat periodically is an excellent idea,” says Dr. Stone. “A change in weight is apt to occur slowly and be otherwise unrecognizable to the owner.” Frequently, he adds, “Owners are completely surprised when I announce that their cat has lost — or gained — weight since their last visit.” He therefore urges owners to be vigilant about weighing their cats routinely, since noticeable weight loss — especially if it exceeds 10 percent of an animal’s normal body weight — can indicate the presence of a serious health problem. “Seeking veterinary attention is advised whenever any noticeable weight fluctuation is detected,” he notes.

Diagnosis of abnormal feline weight loss can be a complex challenge due to the long list of problems that can be responsible — some of them readily curable, others that defy treatment of any kind. Most of the causes fall into one of the following broad categories:

Dietary insufficiency: A cat may simply loathe a new variety of food that she is fed each day and will refuse to eat it. Another animal in the home may habitually chase a cat away from her food bowl. The bowl may be positioned in an area of the home that is not conveniently accessible to her. She may be experiencing a serious dental condition that makes chewing any food — soft or hard — painful. Or, as Dr. Stone points out, the cat may be harboring a deeply-rooted illness that diminishes her appetite.

Infectious disease: The clinical signs of several of the most serious feline infectious disorders, both viral and bacterial, include lethargy and loss of appetite. Among the most most common diseases in this category are feline leukemia virus (FeLV); feline panleukopenia (distemper); feline immunodeficiency virus (FIV); and feline infectious peritonitis (FIP).

Parasitic infection: Frequently associated with a lack of veterinary care, several types of parasites can infect a cat, take up residence in her gastrointestinal tract, and rob her of necessary nutrients, thereby causing significant weight loss. Notable among these are the common roundworm. “Cats who are infected with these worms,” says Dr. Stone, “typically look and behave all right — but they tend to be ravenously hungry and have frequent bouts of diarrhea.”

Stress: A wide variety of stress factors can initiate or contribute to a cat’s food avoidance and consequent loss of weight. For example, notes Dr. Stone: “A cat may be traumatized if a new pet is brought into the home, if the owners move into a new house or apartment, or if they board the animal away from her home when they go on a vacation. The cat may be initially healthy, but when she’s upset or frightened, she may stop eating. And any prolonged lack of food intake can make a cat very ill.”

When examining a cat who is experiencing significant weight loss, a veterinarian will initially want to find out whether the patient is — aside from her diminished appetite — behaving normally or is lethargic. A number of questions have to be answered: In addition to the loss of appetite, is the cat vomiting or experiencing diarrhea? Has her routine diet or feeding schedule been changed in the recent past? Are her teeth in good condition, and are the tissues in her oral cavity free of irritating sores? And have there been any significant changes in her owners’ household?

Then, according to Dr. Stone, feline weight loss may often be evaluated by means of a thorough review of a cat’s eating history. “This involves the owner’s responses to three simple questions: Is your cat eating more than usual? Is she eating less than usual? Or is she eating about the same amount?” he says. “A cat that is losing weight despite a good appetite suggests, for example, the presence of gastrointestinal parasites, diabetes mellitus, hyperthyroidism or some type of intestinal disorder.

When more testing is needed

On the other hand, weight loss associated with a noticeably decreased appetite suggests a problem that is likely to require additional testing — possibly as extensive as a thorough blood, urine and stool analysis; radiographic and, perhaps, ultrasonic imaging; and in some cases, biopsies of abnormal internal organs.

In virtually all instances, says Dr. Stone, dramatic weight loss must be regarded as a sign of an underlying problem. “And the correction of that specific problem,” he observes, “should reverse the weight loss — by means of insulin therapy for diabetes mellitus, for example, or by the elimination of intestinal parasites. Weight loss that is associated with a decrease in appetite is rarely going to be reversed simply by offering an animal a higher-calorie kind of cat food.” — Tom Ewing