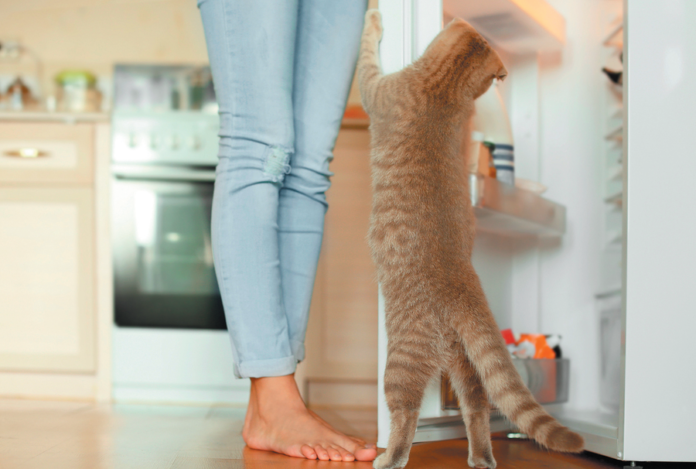 Dogs might desperately plead with their owners for food, but cats tend to insist on it. And they insist often. Just google “cats beg for food,” and multiple entries will come up.

“It’s one of the biggest issues we face,” says Tufts veterinary nutritionist Deborah Linder, DVM. “Often it’s when we’re trying to get a cat to adhere to a weight-loss program.” But cats frequently bug you for and go after food not meant for them “in multi-cat households where for various medical reasons you have to be careful about how each pet is fed. Cats want whatever they’re not supposed to have, so whatever you want them to do, they do the opposite.”

Insisting on food can also just be an issue of timing. Cats are crepuscular, Dr. Linder points out, which means their main activity occurs at dusk and dawn. “The minute the sun pops up,” she says, “cats are meowing, nibbling at their owners’ toes, pawing their faces. ‘It’s time to get up; I want my food.'” But some cats are at it all day, and their tactics often work.

Why? “If a cat starts off not too aggressively and you ignore it,” the doctor says, “they escalate their entreaties. Finally, you cave, and that proves a point to them, which is that if they try hard enough, they can train you. I’ve definitely seen that with clients quite a number of times.”

Strategies for not becoming a short-order cook

“My rule for whenever begging gets to be a problem is to remove any possibility of food coming directly from me,” says Dr. Linder. “You want to break any sense a cat has that interacting with you causes food to appear.” The best way she has found, she explains, is through the use of timed feeders. We talked about timed feeders for keeping cats away at dawn and recommended some options in the July issue of Catnip, but timed feeders are a good solution no matter what the issue is with cats overstepping when it comes to meals, including eating another pet’s food.

Timers are also a great tool for moving cats from ad lib feedings to a schedule, which in turn helps make sure that you don’t overfeed them, Dr. Linder points out. It builds in portion control.

“In my own multi-cat household,” she says, “my two cats have figured out their different spots, each with its own feeder. They both go directly to their own spot for their food.

“Originally, I had to set the timers for 4:30 am,” she says, “a half hour before they would start bugging me. But I was able to roll it back to 8 am because they learned that I have no food for them. Now they meow and scratch at the feeders.” If you do need to continue to feed your cats at dawn because they won’t wait and will wake you, Dr. Linder recommends keeping the feeders in a room far away from your bedroom so you won’t hear the cats “interacting with” the gizmos.

Dr. Linder concedes that she actually cheated in moving back the timed feedings. “I had an overnight trip,” she says, “and instead of having the timers go off at 4:30 am the morning I was away, I had them go off at 8. It worked right away. Cats are smart and quickly figure it out.”

Dr. Linder points out that she has learned in talking with cat owners that while some cats beg if they’re hungry, many beg out of boredom or to initiate interaction or a show of affection. “Just because a cat is meowing,” she says, and even if they’re showing you that it’s about the food bowl, if you know they’ve already gotten enough rations, you can re-direct their attention.

“Try playing with a toy or shining a laser light around the room or doing something else fun,” she suggests. Sometimes a cat might just want a little stroking or a little lap time. “See what you can do to get their mind off the kibble.” You might very well find that what seemed like hunger for food is hunger for something else entirely.