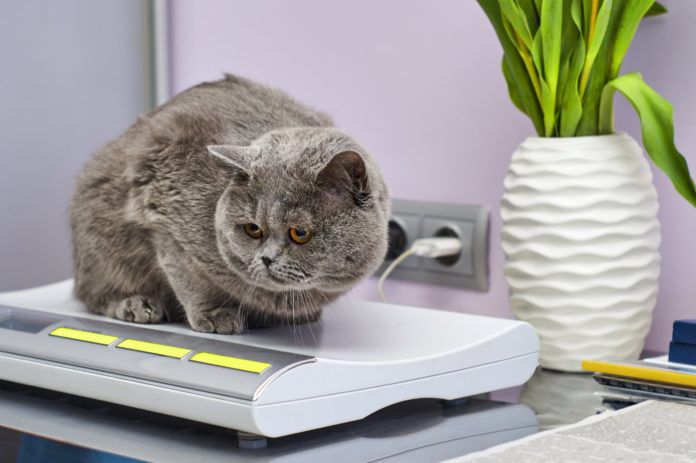 When Blazer tipped the scale at 29 pounds, his owner knew it was time to take action. “He has always been a big boy,” explains Susanne Jenkins of her tabby cat. “But over the course of one long winter, he simply blew up. He was living with four dogs and getting into a lot of dog food.”

Even when he reached 25 pounds, however, Ms. Jenkins recalls that the veterinarian said, “He’s solid, and he’s healthy. He’s just a big cat, so don’t worry about it.”

Then Ms. Jenkins moved half way across the country and — when Blazer developed a skin condition — brought him to the Cummings School at Tufts University for a consultation.

The veterinarian who treated him initially wanted to prescribe steroids, but because steroids can increase appetite, leading to more weight gain, and can also increase the risk for diabetes even without weight gain, the doctor had to go with a much more expensive drug.

That’s when Ms. Jenkins was referred for weight management counseling and learned that Blazer had gained four more pounds —now weighing more than a large Beagle.

Too many cats are overweight

Unfortunately, Blazer’s case wasn’t terribly unusual. As the nation goes, so go its cats. “Between 30 and 60 percent of companion cats are overweight, depending on which study you’re looking at,” says Deborah Linder, DVM, head of the Tufts Obesity Clinic for Animals.

What also isn’t all that unusual, but just as unfortunate, is that not all veterinarians recognize obesity for the problem that it is. “We’re used to seeing overweight cats, so that’s become normal,” comments Cailin Heinze, VMD, DACVN, assistant professor of nutrition at Tufts. “A vet might not appropriately communicate to an owner when a cat has gone from ideal body weight to overweight.”

The fallout can be serious, if not deadly. Excess weight in cats can exacerbate arthritis and cause problems that include diabetes and orthopedic ills. It can also make dermatologic problems worse because an obese cat can’t groom himself. But it takes a dedicated owner working in tandem with a veterinarian to tackle the problem, in no small part because there are a lot of so-called weight-management foods on the market that have at least as many calories as non-diet food.

Why cats become overweight is multi-factorial. One reason is that people tend to just fill the bowl rather than measure out the food, and end up feeding much more than the cat actually needs. “It doesn’t take too much overfeeding to make a cat too fat pretty quickly,” Dr. Heinze says. An owner could easily feed three times what a cat needs. Blazer was definitely being given too much food.

“Dog owners often have more of a concept of how much the dog is getting,” Dr. Heinze adds. Then, too, dogs typically get more exercise than cats. Convincing a cat to move around more than it might be inclined to can sometimes prove challenging.

Fortunately, for an owner who’s serious about slimming down a cat who weighs more than is good for him, there’s much that can be done.

First of all, take an overweight cat to a veterinarian for weight management therapy rather than trying to go it alone. Without professional help, you can end up continuing to overfeed or under-nourish — or both at the same time — because small changes in the amount of food you serve can make a big difference in a cat’s daily calorie count or his vitamin and mineral intake.

You can also predispose your cat to a life-threatening condition called hepatic lipidosis, which sometimes takes hold if weight loss occurs too quickly. Try to bring a reliable dietary history to your first appointment.

“Many cats are fed ad lib or in multiple-cat households,” Dr. Linder says, so the owner doesn’t have any idea how much the cat is really eating. Measuring out food for the cat can give the veterinarian a true baseline from which to start. A vet can also prescribe a diet available only by prescription that will cut down on your cat’s calorie intake, but not shortchange him on nutrients in the process.

All over-the-counter weight-loss foods have enough nutrients, but only if you feed them in the amounts recommended on the can or bag. If you cut back because your cat is still not losing weight, your cat can end up with nutrient deficiencies. Note: The prescription diets do not taste like “rabbit food” to cats, Dr. Linder points out. “The companies know that it’s very important that the cats like the food, so they do a good job in making it very palatable.”

Don’t expect overnight results. Getting down to ideal weight “could take up to one to two years,” Dr. Heinze says. To make a human analogy for a cat such as Blazer, think of how long it might take to go from 300 pounds to 150.

Buy a baby scale and weigh the cat every one to two weeks. You need regular progress checks to see if the plan is working or needs an adjustment, and it’s much easier to have the scale at home than to take the cat for a dreaded vet visit every couple of weeks.

Be prepared for your cat to hit plateaus. Just as people who have been dieting for a while tend to find the needle gets stuck at a number on the scale for a few weeks no matter how hard they try, so it goes for cats. In fact, Dr. Linder says, cats are uniquely adept at slowing their metabolisms as they eat less, which makes them prone to hold onto weight even when it would seem that the weight should come off.

Keep in mind that you may have to restrict your cat’s food further if the weight stops dropping off, or if the veterinarian’s initial estimate of the cat’s caloric needs for weight loss are off. This can be very hard for owners, both Dr. Linder and Dr. Heinze acknowledge. While calorie requirements vary from cat to cat, some cats maintain weight on only 150 calories a day, which might translate to just a third of a cup of food or even less, and owners fear they’re starving their cat, or at least leaving him very hungry.

“It’s very common for owners to say, ‘I don’t want my cat to be miserable,'” Dr. Linder reports. Ms. Jenkins expressed that very worry. “A quarter cup twice a day was not that much, and then to have to knock it down…” But with Dr. Heinze’s reassurances, she came to understand that Blazer wouldn’t starve. As long as the food was nutritionally adequate, he would be fine.

How to deal with begging

Be ready to employ some tough love — and distractions. “Cats tend to be very persuasive beggars,” as Dr. Heinze puts it. Dr. Linder learned that firsthand. “When I adopted my cat Chestnut,” she says, “she was overweight and would meow all night when I started her on a weight management plan. I dealt with it by shifting the focus away from me being the provider of the food. I bought an electronic food dispenser and set the alarm to go off at 4 or 5 a.m. Chestnut learned to wait for the food; she knew the tray was in charge rather than me.”

Make sure your cat burns calories through exercise. One of the most effective ways to do that is to dispense little bits of his food in different bowls throughout the house so he has to move around to get it all.

There are also toys that hold food inside, and the cat has to work at getting it out of a little opening. “The food toys are usually more popular with dogs,” Dr. Linder says, “but some cats like them, too.”

Dr. Linder also recommends a little one-on-one with the cat to get him to move around more. “A lot of cats love to chase the light from a pen light or flashlight,” she says, adding, “a lot of what we see as begging for food might be longing for attention. The cat might be just as happy with more interaction as with more food.”

Keep the faith. When a cat has close to 15 pounds to lose, like Blazer, the task can seem anywhere from daunting to impossible. But “it can definitely work,” Dr. Linder says. “I’ve seen it work multiple times.” — Larry Lindner